Which beast won since last time, the creative juices or the nagging tradition of sewing my girls Easter dresses? As you can see below, the dresses won out. I couldn't tell my daughters that after eight years or so of making them something to march into church matching on Easter Sunday that I would fail them. (I had hinted as much once, and the horrified looks on their little faces about did me in.) 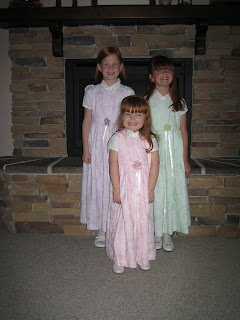 If you do the math, you can tell that I first made them dresses when my second daughter was oh, 8 months old and I wasn't even published yet. Life was much simpler then, as in, I wasn't ever ON DEADLINE.

Note that the "dresses" aren't dresses. They are jumpers (hence, no sleeves to fight with that add lots of time to the sewing process). They still, however, had zippers, which you cannot see, fortunately, because they are crooked. You also, fortunately, didn't see or hear me sewing them, because it was not a pretty sight.

The pattern called for three fancy stripes at the bottom. Note that there are no stripes. Said pattern also called for trim at the neckline and around the arm holes. Note that there is no trim at those locations, either. Instead I opted for a fabric that had a cute, flowery design all by itself. I bought ribbon and a $1.87 flower for each dress that I could pin to the front of each one in about 3 minutes flat.

Next year I'm thinking that instead of jumpers I'll do skirts. Then the following year, maybe I can get away with a cute purse. Then maybe the next year they'll be okay with a fancy scrunchie in their hair . . .

By Saturday, I had managed to hem the last dress, so I pulled out my trusty Neo as we drove home from visiting grandparents and I typed up a scene that had been floating in my head all week as I sewed. It was great! I love my main character, and today I had a ball going back to that scene and fleshing it out.

I looked forward to spending this week writing more of her story and "living" with her.

After all, my editor had told me I had a few weeks to "run free." I had pictured myself doing a Julie Andrews impression, twirling in the Alps.

Alas, it is not to be. She e-mailed me today officially putting me back on deadline.

However, she did throw me a bone. I have a title!

My Salt Lake City Temple book, due out this fall will be called Spires of Stone.

Congratulations on the dresses and on the title! I knew the dresses would win out--as well they should have. Adorable. And, ewwww, zippers--I try to avoid them whenever possible. Good for you.

Very cute dresses. You are making me feel guilty. Just don't tell my girls. Great idea to have them all in different colors, yet the style is the same.