My sister (and fellow word nerd) sent me the following photos, all taken within a 48-hour period.

I knew right away we had a Word Nerd Wednesday on our hands. Laugh with me! 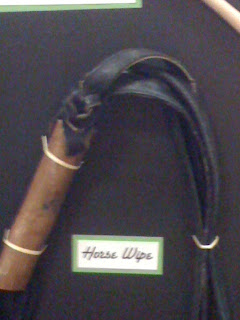 An unfortunate error . . .
this is what happens when a parent does the typing
then tells the kid to cut out & paste all his own tags
for his report on horses in Mexico. 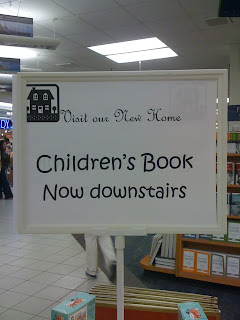 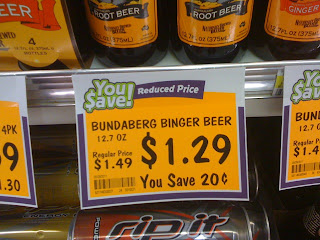 Apparently, both the ginger beer and root beer are for BINGERS. 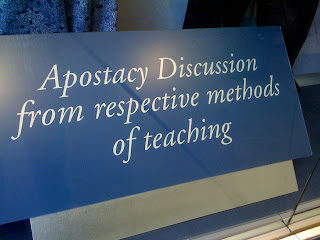 The historical exhibit stands alongside three or four
other plaques that discuss (quite clearly) the ApostaSy.

These kinds of things are the reason that some days I wish I had the guts to carry a Sharpie everywhere I go . . . and correct signs that make their creators look well, not quite intelligent.

Not sure how I ended up with two weeks between posts (unless I think back over the crazy busy that has been the last two weeks, and then I go, "Oh, yeah.").
When I wrote about the Whitney gala last time, I didn't have any pictures yet. Here are a few. I'd planned to post pictures when I had more, since flashes were all over the place, and I know there are more out there I don't have access to right now, but it's been long enough, so here's what I have.
First, the award itself. It's lying flat here, but it stands up and opens and closes like a real book: 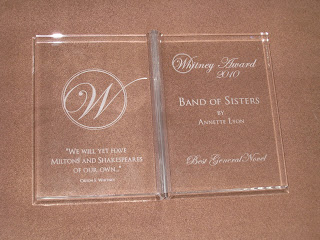 Isn't it purdy?
Below: Before the gala, with critique group member (and 2-time Whitney winner) Heather Moore along with novelist and Deseret Book editor Lisa Mangum. We thought the red theme would be fun for a picture. 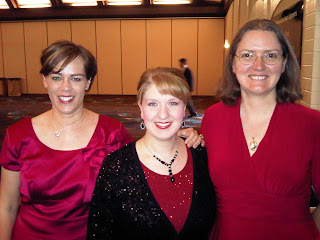 Tristi Pinkston and Danyelle Ferguson presented the award to me. Here I am, right after I got onto the stage, with Tristi, hugger extraordinaire: 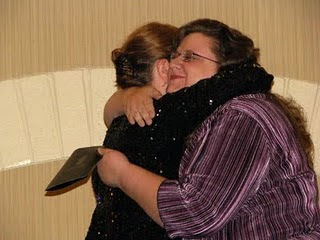 The pics above and below were taken by dear friend Kimberly. I won't post the one where I'm totally blubbering, but you can tell here that I was emotional.
(No worries; these were happy tears.) 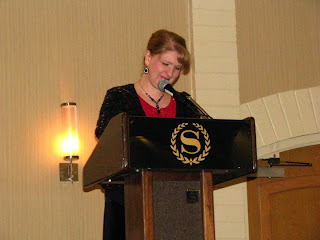 After the gala, with the amazing THREE-time Whitney winner, Stephanie Black. You can just make out the gold box that has the award inside: 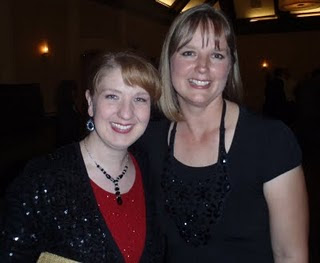 I'll be back to my regular posting schedule soon, including Word Nerd Wednesday and other fun stuff.
Promise!
at May 23, 2011 9 comments:

Email ThisBlogThis!Share to TwitterShare to FacebookShare to Pinterest
Labels: Band of Sisters, Whitneys

I've had Blogger up all day—blank—because this last weekend was just so . . . big. How to encapsulate it in a single post? (Or at all, for that matter?)
It began with the chance to go out to dinner with several writer friends and Marcia Markland, an editor at Thomas Dunne books. Marcia was an absolute delight to talk with and get to know, one of the sweetest women I've ever met.
That night I briefly met up with two of my cousins to celebrate one's university graduation, something she's done with finesse and great courage against huge obstacles. (So proud of you, Jamie!)
Friday morning began the 8th annual LDStorymakers Writers Conference. It was the biggest and best one so far (which is saying a lot). Friday morning while walking through the halls, I immediately recognized agent Sara Megibow from her Twitter avatar and said hello after yelling out her name (and probably taking her off-guard. Sorry about that, Sara!)
Later I attended classes and got to rub shoulders with the other two agents attending, Sara Crowe (I don't think she ever stopped smiling all weekend) and Becca Stumpf (one of the cutest people on the planet).
Over the two-day conference, I taught three times, coordinated the meet-and-greet for the local LDS publishers and attendees, and moderated the panel with the national agents and editor.
At one point during the conference, as I headed up some stairs, an attendee said, "You're so awesome!"
Never one to turn down a compliment (but having no idea who she was or what she meant), I said thanks. She went to say that she had an MFA, but that my class taught her more than any lecture she'd attended. SCORE! (Memory has totally failed me; I don't remember her name. But she has my eternal gratitude.)
I attended several classes, talked to lots of friends (not nearly enough time for that!), and had lots of fun chatting with buddies and eating chocolate late into the night at the hotel.
AND THEN
Then there was the Whitney Awards gala. Ever since Robison Wells, Whitney founder, first told me about the idea of the awards program (as in, the day he came up with the idea, years ago), I've wanted one. Like really, really, wanted one. It's become a goal and an ache.
The first year, I was a finalist. So, yay. But I didn't win.
The ache intensified as the years went on and I didn't get anywhere near an award. I've watched and celebrated as many friends received Whitneys, and I've been genuinely happy for them.
And yet.
This year I was a finalist for the second time. Saturday night, I sat at the gala, all dressed up, hardly able to eat my steak dinner and cheesecake dessert (I didn't finish either, which is very unlike me).
When it was time for them to announce my category, I drew into myself, refusing to hope. I'd read someone else's blog post about the finalists (and that post's comments) and had pretty much convinced myself that the awesome Gregg Luke, who has been a finalist every single year, would take the award. I chanted his name in my head, just waiting for it to be read.
Instead, I heard, "Band of Sisters, by Annette Lyon."
Whoa. The next few hours were pretty much a blur of hugs and lots and lots of happy tears. (Thank you, waterproof mascara.) (Great. I'm crying again.) So many friends and colleagues gave me genuine wishes of congratulations; the outpouring was nothing short of amazing. I've never experienced anything remotely like it before.
The gala was filmed, and if it ends up online, I'll link over so everyone can see me all blubbery at the microphone.
Many people asked if I had a spot picked out for the award at home. I hadn't. I wasn't about to think that far ahead, assume anything, and jinx myself. I have a spot now, though. My Whitney sits right above my computer, where I can see it as I write.
When my husband and I walked in the door, the kids were asleep. But their dad had texted them from the gala that Mom won, and they'd cobbled together a sign, taping several sheets of paper together and then attaching it to the wall: "Congratulations, Mom." (It's still up.)
This last year or so has been particularly difficult on my writing front, for many reasons which I won't go into here (no one really knows all the ins and outs, so whatever you're thinking, that's not it, or at least not all of it).
More than once I've wondered whether I was just done, because often the obstacles have been big, and the emotional side of this writing gig can be so intense. I've been at this since 1994. It was a good run.
Besides, why was I doing this to myself? (Willingly and on purpose?) Maybe, I thought, it was time to hang up the fiction hat and just work on freelance stuff to help pay for the kids' school fees and the like.
Then I got to hold a Whitney award in my hands. MY award, with my name and my book's title engraved into it saying it was the best in its category for that year.
And I felt like I could fly.
Thanks to everyone who has supported me, to everyone in the academy who voted, and (yet again) thanks to the military wives who opened their hearts to me so I could write Band of Sisters.
The fiction hat is back on my head where it belongs.
at May 09, 2011 39 comments:

As I do my final preparations for this weekend's LDStorymakers Writers Conference and the Whitney Awards gala this weekend, I'm already looking ahead to yet another fantastic conference.
But unless your age ends with teen, you're not invited!
The first Teen Writers Conference was June of 2009, put together by several writers in the West who wanted to reach out for young aspiring writers. We thought maybe we'd get 30 attendees.
We ended up with 108.
To say that first year was a smashing success would be an understatement. We knew the event had tapped into a real need: helping teens who love the written word to improve and grow.
So we did it again last year, and this June will mark the third Teen Writers Conference.
Each year, successful, award-winning authors come to share their knowledge and enthusiasm with young writers.
Past speakers include Jessica Day George, Janette Rallison, and J. Scott Savage.
Attendees get to enter a writing contest and get solid feedback. Older teens can attend a class about what comes next, including how they can set their feet on the path of writing and publication now that they're entering adulthood.
Everyone involved with the conference, sponsored by Precision Editing Group, does so because of their desire to give back; this is not a money-making venture for anyone.
That means it's uber cheap for a full-day conference, with fees just enough to cover expenses. It's just $35 for the whole day if you bring a lunch with you, or $43 if you to order a lunch. (Can you say "bargain"?)
Plus, it's loads of fun.
Here are the details:
Saturday, June 18th
8:30 am - 6:00 pm
Weber State University in Ogden, UT.
Keynote: Bree Despain, the author of The Dark Divine series.
Plus ten breakout workshops including classes taught by:

Every class is focused on real things TEENS can apply to their writing right now, while working toward a future in writing.
Speakers will have their books available for sale (usually at a discount from what you can get them anywhere else). Be sure to have the authors sign them before you leave.
Registration is open now (register HERE), but will close when we reach 150 attendees or on June 8th, whichever comes first.
Based on our numbers from the past, I'm guessing we'll fill up before that and registration will close early, so if you know a teen who wants to go, sign up soon.
See you there!
at May 02, 2011 2 comments: