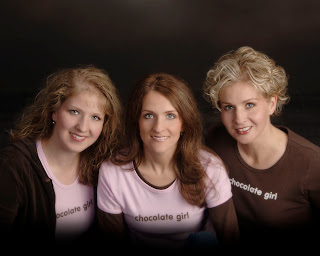 (Above, left to right, the "chocolate" sisters:
Me, Michelle, and Mel.
Photo by Jolley Photography.)
Mel's "fun" idea that she had while driving north on I-15 through the desert on her way from Arizona to Utah was about what kind of business she would like to do.
She'd been a caterer, done the whole dip the chocolate strawberries and make the wedding cake yourself thing.
She'd done event production, such as with receptions for businesses and the like (think Jennifer Lopez in The Wedding Planner, the gal with the headset running the show).
As Mel drove on the open road, she thought that while she enjoyed the catering side, she liked the production end more. Hmm. Ideally, if she could produce any kind of event, what would she produce?
An event centered on chocolate. But what would that be?
By the time she reached Provo, the embryo of an idea had grown. It evolved into what eventually became the The Utah Chocolate Show, first debuting in 2004.
First we took a girls' trip with our mom to New York to see their chocolate show. (And take in a Broadway show, visit Ellis Island, walk through Central Park, see the Met, go on the Kramer Reality Tour [a must for Seinfeld fans!], yada yada.)
We three sisters were the founders of the show, with Mel, the brainchild and oldest sister, as creative director. I wasn't planning on being overly involved, more of a helper and cheerleader, since I was writing and mommying and everything else.
When Mel first asked if I'd help out, I said sure, of course. We all assumed I'd be writing website content and press releases and the like.
Here's the thing: We had no idea how much work this kind of event takes, especially in its first year. We also didn't know that in basically every case but ours, large corporations with huge staffs and massive budgets are the ones putting them on, not three stay-at-home moms. We were taking on something massive.
The result? Next thing I knew, I was Mel's assistant director. I was making executive decisions. I was doing sales and PR. I was freaking attending meetings with ABC and the executive producer of Good Things Utah. (And I've been on GTU a few times.)
Talk about surreal.
As you can imagine, trying to balance family, the show, and my writing career (especially as it grew), all became too much, particularly when the show's preparations reached critical mass each fall.
The show is always the weekend before Thanksgiving, so production craziness peaks beginning in September and never quits until the show is over. For a couple of years there, I had fall releases. Which meant I had a book to promote AND a new book to turn in AND a show to produce all at the same time. Falls were ugly for awhile there.
As a result, each year I gradually pulled back from my involvement with the show a bit more, until now, well, I'm not part of it anymore, which is truly bittersweet.
I attended last year with Will Call tickets waiting for me at the box office and walked through the hall, sat at a demonstration, saw all the booths (many of those business were mine; I first got them into the show), saw the chocolate wedding cake and photography competitions, peeked in at the classes, talked to my sisters, and so on.
In truth, I got a bit teary-eyed. It was hard to not be part of the show anymore, but the change was a necessary step. One person can do only so much, and if I had to pick between the show and my writing, my writing had to win.
So here's where this whole story comes back to my writing journey: Covenant has been well aware of my involvement with the show all along (because I, oh, gave them free tickets and whatnot).
Several years ago, they asked if Mel and I could co-write a chocolate cookbook. Sure, I thought. No problem. Mel is the kitchen and chocolate guru. She can provide the recipes. She's a good writer too; I could do most of the writing, and between us, we could do a great book. We had a 3-4 month window each year post-show where things were quiet enough that and we could get plenty of work done on a cookbook before show work ramped up again.
Two years in a row, starting in January (we gave ourselves a six-week break for things like, oh, CHRISTMAS), we tried to collaborate.
Two years in a row, it just didn't work.
We are two people who function on different wavelengths. (We are also two people with two versions of ADD. That made it interesting.) So while we love each other to pieces and can sit together chatting for eight hours straight (not even almost kidding), we just couldn't seem to write together. I sighed and reluctantly shelved the manuscript, such as it was. Collaboration just wasn't something that would work for us.
Then this last March I got an e-mail from Covenant's managing editor. It arrived right in the middle of writing There, Their They're, doing my blog tour for Tower, getting ready for the annual LDStorymakers conference, and finishing up my work on the Whitney committee--including doing all the Whitney reading I had to do . . . basically as I was doing my headless chicken dance.
The e-mail basically said: "Remember that chocolate cookbook we talked about years ago? There's an increasing demand for it. Could you do it alone? We want it out next year. How fast can you get us a manuscript?"
Mel was the chocolate guru. I was the show's writer and assistant director.
I stared at the e-mail like a deer in the headlights.
Umm . . .
at September 11, 2009

Email ThisBlogThis!Share to TwitterShare to FacebookShare to Pinterest
Labels: Chocolate Cookbook, There Their They're, Tower of Strength, Writing Journey

I SO wish I'd known you back when you came to NYC!

Ok, that is uber cool. Every time I see the chocolate show is going again, I think "ooh, maybe I should go!" I'm waiting for the chocolate cookbook...anxiously.

I love your status updates about chocolate recipes. I really can't wait for this cookbook. :) So keep going!

wow! what a lot going on! good luck and I think what you're doing is awesome!

How great to have close sisters. And you're all so pretty.
Chocolate is close to my heart. I'm so glad you're writing this cookbook. Can't wait for it to come out. :) Ever think of having a booth for your book at the chocolate event that started you on this journey?

I love that picture of you and your sisters!

I can't wait for this cookbook! You are one busy lady.

my first visit here & I really enjoy your blog. William is the chef in our family but I think the chocolate cookbook will be something our whole family will enjoy!

It must be hard to be so darn fabulous that everyone wants a piece of you. Poor Annette, tugged in so many different directions! Can't wait for that cookbook though...

Wow! I had no idea that your sisters and you were the creative geniuses behind the greatest show on earth! I went a couple years ago and my head nearly exploded from the sheer awesomeness.

(and I'll trade you more cupcakes for tickets!!)

You kind of make me wish I lived in Utah. Chocolate bread pudding...be sure to put that in there.

You are awesome. Even with all your headless chicken dancing, you kept it all together and made it all work. I am still impressed.

Ok, now I totally get all your FB updates about making chocolate goodies! hahaha

That is pretty dang cool!

Yummy chocolate. That sounds like something fun. I can't beliee I lived in Utah during that time and didn't hear of the chocolate show. Most likely this was do to the fact I was trying to do the school thing and lived in my own little bubble.

Sounds like you have some more chocolating in your future.

You're a woman of many talents. The more I learn about you, the more I see how inventive you are. I can't wait for the rest of this story but I have to say, your pic at the top is GORGEOUS. You all look so beautiful.

Your talents are endless! I am really looking forward to that cookbook.