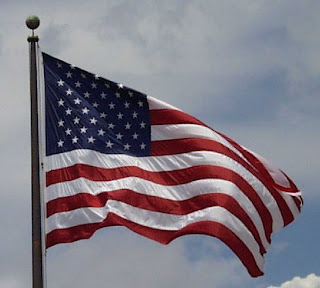 Laurie (L.C.) Lewis is a friend of mine and a historical novelist who has studied U.S. History, particularly the founding of the country. She's written a series of books about the the War of 1812.


(Note: I consider myself relatively well-versed in US history, but I learned a ton reading her stuff.)

She suggested a few words worth looking at on Word Nerd Wednesday for the holiday. Laurie gets lots of feedback from people who see those misused, so she passed some of them on to me.


EVINCES
The text: But when a long Train of Abuses and Usurpations, pursuing invariably the same Object, evinces a Design to reduce them under absolute Despotism, it is their Right, it is their Duty, to throw off such Government, and to provide new Guards for their future Security.


The meaning: To display clearly, or provide evidence of. This part of the Declaration says that the "long train of abuses and usurpations," among other things, show clearly that the intent ("design") or the British government was to absolutely control the colonists. And when a people have such evidence, it is their right to throw off that government.

The text: We hold these Truths to be self-evident, that all Men are created equal, that they are endowed by their CREATOR with certain inalienable Rights, that among these are Life, Liberty and the Pursuit of Happiness.

The meaning: Something that cannot be alienated from or transferred from ownership or relation. In other words, there are certain things human beings own by virtue of simply being alive. Jefferson used John Locke's ideas in his writings, and here, he used the same idea, changing one of Locke's unalienable rights. The Declaration has "the pursuit of happiness" where Locke used "estate" (or property).

PERFIDY In the text: HE [meaning the king] is, at this Time, transporting large Armies of foreign Mercenaries to complete the Works of Death, Desolation, and Tyranny, already begun with Circumstances of Cruelty and Perfidy, scarcely paralleled in the most barbarous Ages, and totally unworthy the Head of a civilized Nation.

The meaning: Being unfaithful and disloyal. Pretty clear in this instance what it refers to: The King George III of England was sending troops to the colonies to keep them in line and make them obey his laws, which felt traitorous tot he colonists.

CONSANGUINITY In the text: We have warned them, from Time to Time, of Attempts by their Legislature to extend an unwarrantable Jurisdiction over us. We have reminded them of the Circumstances of our Emigration and Settlement here. We have appealed to their native Justice and Magnanimity, and we have conjured them by the Ties of our common Kindred to disavow these Usurpations, which would inevitably interrupt our Connexions and Correspondence. They too have been deaf to the Voice of Justice and of Consanguinity. We must, therefore, acquiesce in the Necessity, which denounces our Separation, and hold them, as we hold the Rest of Mankind, Enemies in War, in Peace Friends.

Laurie also pointed out two words that are often misunderstood in our country:

REPUBLIC This is the kind of government we have in the United States. (Remember the pledge: "and to the republic for which it stands . . .") A republic is where citizens vote for representatives who then run the government and are responsible to those who voted them in. This is what we do with our representatives and our senators. The average U.S. citizen doesn't make laws or vote for laws. We vote for leaders who do that for us.

DEMOCRACY In some ways, a democracy can be a republic, and vice versa, but they aren't necessarily the same thing. A democracy usually means that the majority rules. The power lies entirely with the people themselves. Our country has elements of a democracy, but in the end, we're mostly a republic. Even voting for the president isn't technically a democratic situation, because each state is really voting for electoral seats to represent their votes. It's not majority rule. If it were, several recent presidential elections would have ended up with different results.

There's an episode of Monk where he sees a copy of the US Constitution in a bag and knows immediately that the woman who owns the bag is an immigrant working toward citizenship. He explains how he knows: "You're studying the Constitution, something no citizen would ever do." The line gets a good laugh because, unfortunately, it's at least somewhat true. I hope more of us take the founding of our nation more seriously, and that includes knowing what's in both the Declaration of Independence and the Constitution.

Thanks!! I loved this. Happy 4th to you too!

Very cool! And thanks for the reminder of the exceptionally powerful wording.

What a great post!
Perfectly in keeping with your blog AND the holiday.