On our last Word Nerd Wednesday, we talked about how Utahns say mountain and how some people over overboard in trying to be "right" (note the sneer quotes) by pronouncing the T. When my friend Jordan McCollum, who is as big a word nerd as I am (only more qualified, because she's got a degree in linguistics), commented in that post about hypercorrection, I knew I wanted her to elaborate on the topic and share it with my readers.

Don't know what hypercorrection is? Don't think you're guilty of it? Maybe, maybe not. It's worth knowing about. Read on!


Hypercorrection: If talking like this is wrong, I don't want to be right
Guest post by Jordan McCollum Have you ever drifted out of your lane while driving? I know I have. The natural tendency is to quickly correct your course by pulling the wheel back the opposite way. But sometimes, a drifting driver jerks the wheel back in the right direction too much. The over-correction succeeds, but the vehicle shoots into the wrong lane or the car rolls.

The same thing happens in language. (Okay, with fewer fatalities.) Most people want to speak "correctly." But did you know there might be such a thing as "too right"? I'm sure we've all had an English teacher or other "friend" who corrects casual speech with prescriptivist usage and pronunciation.

Fortunately, sometimes, those friends are so right, they're wrong. (But not dead. Whew!)

Hypercorrection is the linguistic term for being "too right." Usually, hypercorrection comes about because the speaker knows the "rules" of the language, in pronunciation, usage, or grammar, but applies them in more situations than they should (hence clip at right).

Hypercorrection is a very common phenomenon. In fact, it's part of learning a language, too. If you've ever heard a small child suddenly start saying "goed" instead of "went," it's a form of hypercorrection. They're learning that you form the past tense by adding the -ed sound, and applying it in situations where you actually don't follow that rule.

A couple weeks ago, Annette blogged about how people pronounce "mountain." People see the T and believe that they pronounce it like you'd say a T in isolation, or at the beginning of a word. However, the American pronunciation of "mountain" uses a glottal stop instead of a "tuh" (and those are just two of the six ways T is pronounced in English words!).

Mountain isn't the only word that uses a glottal stop for a T. Most speakers of American English, in natural speech, will pronounce the first T in important as a glottal stop. (It shows up all over the place in lots of other varieties of English too, so no knocking on Americans.)

However, some American English speakers see the "T" and think the "correct" pronunciation must feature a hard "tuh" sound like you'd hear from a T at the beginning of a word (or in British English). But T is virtually never pronounced as "tuh" in the middle of a word in American English—we rely on four of the other "allophones" of T in the middle of words, and the glottal stop is just as valid a rendition of T as the "tuh."  So when you stick a "tuh" in the middle of "important," you start to sound a little . . . well, self-importuhant.

Phonologically speaking, this pronunciation is unnatural in all varieties of English (because in British English there's no 'r' there).

Another great example of hypercorrection is found in this clip from My Fair Lady, where Professor Higgins is trying to teach Eliza Doolittle to stop her dropping her H's at the beginning of words:

The "hever" is exactly the same principle—applying a correct rule (add an 'h' to the beginning of words that you pronounce as starting with a vowel) to an incorrect situation (a word that really does start with a vowel). Funnily enough, this same principle has changed the pronunciation of the name of the letter "h" in some varieties of English to "haitch." This is also influenced by the perception of h-dropping accents like Cockney as lower in prestige.

Another place I see this is when actors who speak a variety of British English get an American role. In many accents of British English, an R at the end of the syllable isn't pronounced, but in most varieties of American English, it is. So sometimes an actorrr tries a little too harrrd to stick those R's in therrre, verging on another popular dialect, Pirate English. Yarrr. (But yay for trying!) The same principle applies to grammar (maybe even more so). For example, most speakers of English are taught from a young age that you shouldn't say "me" in subject position: Never "me and you went to the store." (Don't you just cringe?!) Always "You and I gave her the gift." But when we move the "me" into another position in a sentence, things get a little trickier: "She gave the gift back to you and I."

Eventually, some people try so hard to speak "correctly" that they end up talking like this:


For our one year anniversary, my girlfriend caused myself to go to a Yankees game, with whomever amongst our friends can go. But, the Weather Channel just changed their forecast and the skies are grey, so we might go with the girl that lives next door to see the movie, "Iron Man 2".

We all want to talk correctly. But keep in mind that hypercorrection isn't "extra right." It's actually wrong.

What do you think? What are your favorite examples of hypercorrection? How do you see good grammar principles go bad? 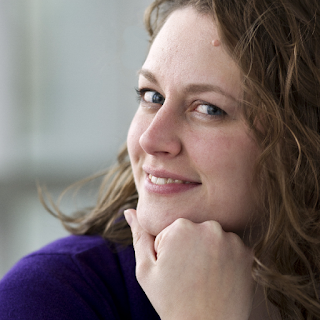 An award-winning author, Jordan McCollum blogs about writing craft and the writing life at JordanMcCollum.com. She holds a degree in American Studies and Linguistics from Brigham Young University and now makes her home in Utah with her husband and three children. Catch up with her writing links, word nerdiness and crazy life on Twitter, @JordanMcCollum.

Thanks for having me, Annette!

Thanks, for the examples.
I don't know what is worse.
Hearing or reading hypercorrection.

Very interesting. I am a former English teacher and found this both funny and informative. Were you corrected often ad a child?

Another example of hypercorrection that makes me cringe:

I have ton's of banana's for sale.

People have been corrected for not using apostrophes so they use them incorrectly.

Lots of misplaced apostrophes flying around these days. And I've seen some hypercorrection with good and well, too.