A Story in Texts and Pictures, Or: I Have Hilarious and Awesome Friends

Long-time readers of my blog know that every year I attend the LDStorymakers writers conference and that it's a bit of a highlight for me. That's for many reasons, one of which is that I have been able to be part of something that had humble beginnings and has since morphed into something massive and awesome. That first conference had somewhere around 42 attendees. This last one had around 700 attendees. Growth, much?

But another reason I love the conference is the opportunity to rub shoulders with my people—with my tribe, as the theme and logo from the conference said.

This year, I had a particularly fun moment in the faculty green room between workshops I was teaching.

Important back story: Child #2 is fascinated by all things psychological (she took AP Psychology and will be minoring in psychology come fall), and that interest began after I handed her Dan Wells' I Am Not a Serial Killer. She devoured it and went on to inhale the rest of the trilogy, followed by The Hollow City, Dan's sci-fi thriller with a hero who has schizophrenia.

It's safe to say she's a huge Dan Wells fan, and she's been eagerly awaiting the release of his next John Cleaver book, The Devil's Only Friend, which is for sale now but hadn't yet been released.

Dan and Rob Wells (both writers and both friends of mine) have a podcast where, a few years ago, they had an ongoing joke about this daughter; they mentioned her by name in every podcast for several weeks. They eventually took the joke all the way by having her on the show as a guest.

While in the green room, I saw Dan. I mentioned that it was too bad he wouldn't be at this year's Whitney Awards gala, because I'd be mentioning him in reference to my daughter in my introductory remarks.

"Is this the same daughter we talked about in the podcast?" Dan asked.

Dan made a generous offer: "I have a few ARCs of The Devil's Only Friend in my car. I could sign one for her."

He promptly retrieved one. But in typical Dan fashion, he wanted to have some fun with the moment. Here is the text message conversation that followed. Never let it be said that I don't have hilarious, if somewhat cruel, friends.

First, I sent her this picture of Dan holding the book, with the following text: 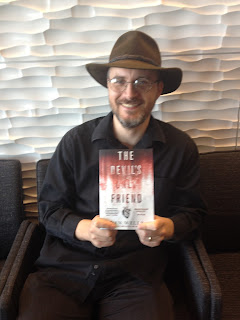 Note the profuse use of question marks and exclamation points indicating intense emotion.

Dan and I cracked up.

"What should I tell her next?" I asked.

Dan suggested a second picture. Fellow writer friend James Dashner, who was also in the green room, happily played along. 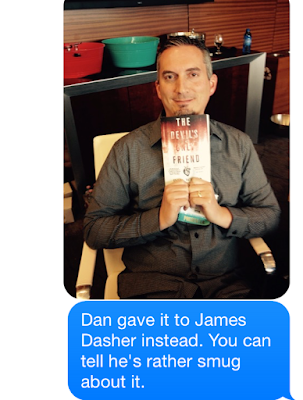 At this point, my child was bordering on freaking out. WHAT was her mother doing to her? She desperately tried to make sense of it all. 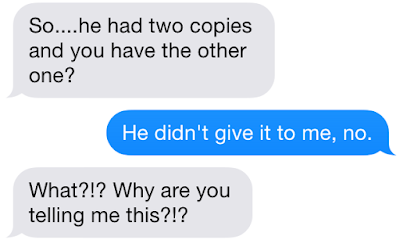 Her frustration was clearly bordering on tears. I confess that those of us in the green room were laughing our heads off.

But eventually we took pity on my poor child and told her the truth with a new photo. 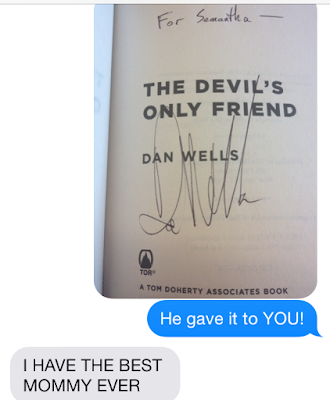 Her reply warmed my heart. What parent doesn't feel a sweetness like nothing else when a child expresses true love and appreciation?

But then she sent one more text, a caveat:

Universal law: Teens can't raise you up without putting you right back in your place a moment later.

Eh. I'll take it anyway. "Best mommy" under any circumstances counts for something.

Besides, Dan, James, and I had a ball creating the emotional firestorm that happened on the other end.

(Who says writers have to grow up to be mature? Pshaw.)