In the Company of Weird

This last weekend I experienced weirdness nirvana—and I had an absolute ball!

For those who keep track, this weekend happened to be the 4th annual LDStorymakers Writers Conference. I spent two days teaching writing, learning writing, and hanging out with writers. If you recall, writers tend to be a weird if lovable bunch, but all of us writers are weird in different ways, so I was right in my element.

So here are a few choice tidbits from my weekend:

First, my weirdness. One of the classes I taught was on grammar and punctuation. Thrilling, no?

Well, to me, it was. And one of the best parts was that a big-shot editor from Deseret Book attended. I finally got to meet Lisa Mangum, who I had heard about many, many times over the course of my career.

Instead of being intimidated (as I had thought I would be), I was thrilled that she sat down in my class. Why? Because really, who else in the world could possibly appreciate a class about commas and semi colons better than an editor?

Several times I turned to her and said things like, "Right, Lisa? Isn't that how YOU would use an em dash?" And she always agreed with me. "Certainly. You're absolutely right." (Or something like that. I was too star struck to remember exactly what she said.)

Of course, after attending my class, Rob Wells had to point out the obvious. "You are such a nerd."

Yeah, well, but he was the one who discovered after attending Josi Kilpack's class that, to his own horror, ROB IS A ROMANCE WRITER!!! GASP!!!

A few other gems from the weekend:

Thanks to Janette Rallison, we discovered that a writer's conference may be the only place on earth where you'll discuss Magnum PI, Dorothy and the Wicked Witch, James Bond, Darth Vader, and Mary Poppins all in the same hour.

It's a ball to find poems written in certain set forms and then sing them to well-known hymns at the top of your lungs. This fun was led by Professor Cynthia Hallen from BYU.

James Dasher has the most bizarre imagination of anyone I know (and that's saying something; I tend to keep company with some weird people).

Every other word out of Jeff Savage's mouth was good-natured rib on James.

Rob Wells admitted to considering using the Hooters logo as a symbol in one of his books.

Josi wore her sunglasses in her hair all day long (and finally told us all why she does that; I always wondered, and now I want to!).

Julie Wright ran the bookstore so smoothly no one realized how much work went into it until after the fact when our books were suddenly just gone.

Other gems: Learning the mystery behind the barbeque smell in the hallways. The freezing cold ballroom, yet the smoldering hot classrooms. All of the keynote speakers who were entertaining, informative, and just plain fun. Getting "crowned" with Heather Moore as next year's conference co-queens (below.) Be impressed I figured out how to add a photo to my blog, because I am a techno-idiot. 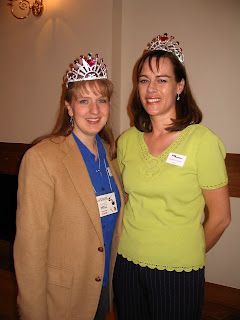 My favorite example of writer weird-dom: Tristi-the-pixie Pinkston. I personally don't like to humiliate myself, but Tristi does just that regularly—and on purpose. For two days straight, she donned fairy wings, a crown, and a wand as the door-prize fairy (the conference theme was "The Magic of Writing"). Every few hours she flitted into the ballroom of the Provo library and "poofed" the magic hat that James Dashner held (who furiously blushed every time). But wait; it wasn't over. Once she added a red boa and sang to James (whose face was so red it nearly exploded).

Did I mention I love Tristi?

My best memory was simply driving away on Saturday night with a tinge of melancholy sadness that it was over for another year, but at the same time pumped to get back to writing.

Finally, and on a more serious note, the conference itself really was spectacular. We've grown and improved each year, to the point that I can honestly say WOW.

We have received an amazing amount of positive feedback from our attendees, but let me end with a piece of feedback from Lisa Mangum (yes, that same Lisa from my class) who works at Deseret Book. Her commentary on the conference says it better than I could, and coming from an outside source as high up in the LDS publishing world as she is, it's saying something:

I have been to many writer's conferences during my ten years as Acquisitions Editor for Deseret Book Company and I can say without hesitation that the LDS Storymaker's Conference is one of the best I've ever attended. I was impressed by so many things about the Conference: the classes were exceptional, the presenters were stellar, the speakers were inspirational, the attendees were enthusiastic. I left the Conference thinking to myself, "Here are the writers who are devoted to their craft, who are willing to work hard and be persistent, who understand the business of writing and of publishing. Here are the writers who are going to revolutionize the LDS writing world." I was so happy to have met so many great people who are involved in such a thriving, active writer's community. I look forward to reading the work that will come as a direct result of the Conference. It truly was a privilege to attend the 2007 LDS Storymaker's Conference. —Lisa Mangum, Acquisitions Editor, Deseret Book Company

Seriously, people, this conference is an amazing experience, and I hope that Heather and I as "Co-queens" can make it just as good as Josi and Julie did in 2007. We'll do our best to make the Storymakers proud and to live up to our attendees' hopes.

Good gracious! I've been waiting for word on the conference, and it sounds like it was even better than I had dreamed it would be. I hope to be there next year. Congratulations on the wonderful feedback!

Annette, you will do a GREAT job. I had such a great time and all your points were right on! fun stuff

Annette, josi is absolutely right! you and heather are going to rock next year! I can't wait to see it!

It is I, The Pretty Pink Present Pixie, flittering down to read your blog! Great summary of the weekend, Annette, and I can't wait for next year, either. I got all the information I needed to pull me out of a serious problem with some of my plots and other difficulties. Of course, I blame Jeff that I had to yank an entire chapter out of my WIP, but after looking at it on the chart, I realized it didn't further any of my plotlines and was boring.

Oh, and I too was interested to see the mystery behind Josi's sunglasses solved!

I am VERY impressed you got that picture on your blog. Mine is plain jane. I can't figure anything out other than a regular post. The conference was seriously awesome! Cheers to 2008!

Hello, Annette. I like your blog. Congratulations on your awards. I hope that your parents are doing well. Thank you for citing me in this post.