First off, I have to say that the writing conference was terrific. Several other author friends were there, including Josi (my abosolute ball of a roommate) and Jules. My co-director for the 2008 LDStorymaker conference, Heather, was also there, and the two of us had our brains going the entire time in planning mode, noticing how they did certain things and getting new ideas for the conference.

It was also a great chance to learn some new things, refresh your mind on others, and just get charged for writing in general. I even squeezed a little writing in on my Neo.

I thought I'd post a little more about the Manti trip, since it was such a great day and my husband and I took so many pictures. (Trust me; I'll spare you most of them--like the dozens of headstones--but some are just too cool not to share!)

First, to address one question from last time: I have no idea why there used to be a tunnel through the bottom of the east tower. Wild tidbit for which I have to answer!

Now for a few new photos:

Here I am standing next to a marker for where the Little Fort used to be, built to protect the early settlers from Indians. The fort was built out of solid stone, and I'm guessing the rock here is one of them. 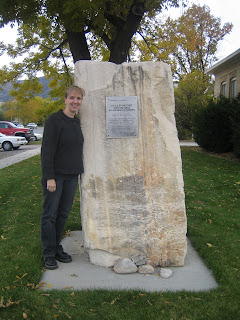 The west doors are huge. Here I am pretending to walk inside. I'm about 5' 5", to give you an idea of how huge these puppies are. A lot of wedding pictures are taken right here. 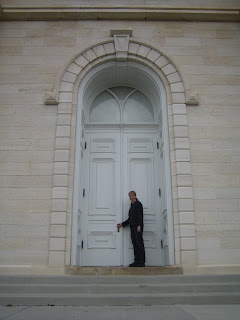 Now this one was way cool. Right up close to the wall on the southeast side (if you go up the staircase there), you can see where this one was snapped. You can still see tool marks on the stone--lots of different sizes of chisels must have been used on these stones. Some look almost pock-marked, while others seem sort of checkerboard-like. Each worker must have had their own style. 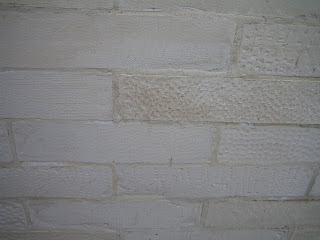 Last one today: the EAST side of the building, which is technically the front, but you almost never see this view, since it faces the hillside. I love the double staircase--which you can't see here at all (they're below the windows; you can see the very tips of the bannisters)--because I couldn't back up far enough. The hill was in the way. 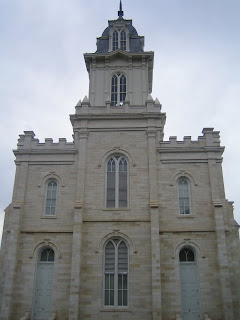 I've had a few crazy days where I've fallen somewhat behind on my daily wordcount, but I will catch up. The Manti book is almost done. It's so close I can taste it!

(Sort of like the lunch hubby and I had at Gandolpho's. Yum . . . I had no idea they make such yummy chocolate cake!)

And may I say, I really love Tabitha? She's such a neat person, even if she is fictional!

You rock! Thanks again for the history lesson. I adore these type of things. The chisled blocks was a very cool picture.

Any ideas on the title yet? When did you start this book? How long has the idea of it been twirling in your head?

Oh- curious...what conference do you speak of? Is it a yearly thing? Where?

Ajoy, No title. I don't bother coming up with working titles anymore, because the publisher gets to pick it, and the ones I pick never stick. (And frankly, I'm bad at titling things.)

I've been working on this one off and on for most of this year, but got busy on it in April & May.

As for the conference, I'm not sure which one you mean--I attended the first even Eden Writers Conference last weekend (up Ogden Canyon), and Heather Moore and I are co-directors for the 5th annual LDStorymakers conference that will be in March. If can make it, I recommend coming--the conference is really good.

I wasn't aware that the publisher changed a titile. Bummer. I can see why you wouldn't bother. :S

Hey, thanks for the info. on the conference coming up in March. I will see what I can do. I was asking about the conference you had just blogged about. The one you reently attended. That's neat that you go to attend- and very cool that you host one with Heather. :)