To Manti We Will Go

A week ago I took a trip down to Manti for research purposes. While I've been there before, it's been several years, and I had never been there using my writer eyes, if that makes sense. I notice things in a very different way when I look at them as possible writing subjects, such as the many old homes still in Manti.

While I normally notice and enjoy things like that, I probably wouldn't remember any particular home after leaving. And I certainly wouldn't drive really slowly through the streets of Manti with hazard lights flashing, jumping out every so often to snap pictures of potential homes for locations in my story. Here are two buildings that will figure quite prominently in the book: 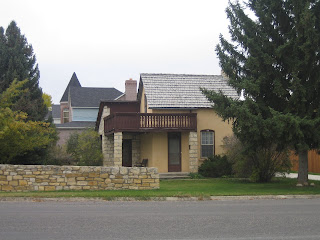 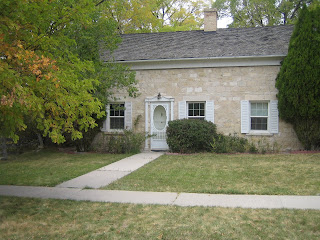 It was also good to be able to see the layout of the city and determine how far my characters would have to walk to get from A to B and whether my scene where I describe C could really have taken place where I put it (fortunately, that one works as I wrote it).

There are a couple of scenes I need to tweak already because now I have a new perspective on the area. For example, I hadn't realized just how close to the temple the cemetery is. The cemetery figures into the story, so that is helpful information. 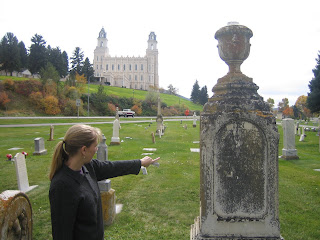 The headstone below has an inscription that struck me as something I might use as well. The intriguing part is hard to read in the picture, but I jotted it down in my handy-dandy notebook, so we're good. 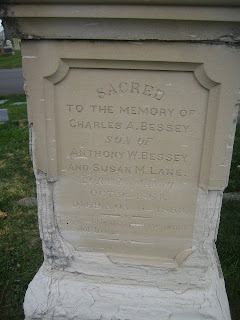 One thing that struck me about the cemetery is the mixture of very old and very new graves side by side. We found graves from 2007 intermingled with ones from the earliest settlers, headstones that were still shiny next to ones that crumbled and were illegible. Among the graves we found Edward Parry, the temple's master mason, and William Fowler, who wrote the hymn, "We Thank Thee Oh, God, for a Prophet."

A fun tidbit I recently learned about the Manti temple is that at one point (years after the dedication) it had a grand staircase leading up the hill from the street. The picture below shows where it used to be. You can tell by the gate opening that's still visible (but padlocked and unusable). 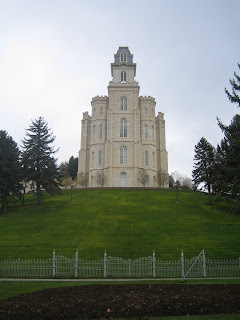 Another fun thing I got to see was the spot where a tunnel used to go right through the east side of the temple. People used to joke that you could "go through" the temple without a recommend. The tunnel was wide enough to drive through in a car. It has since been closed off, and at a distance, the spot looks like another window. A close-up view from the south, however, shows where it used to be: 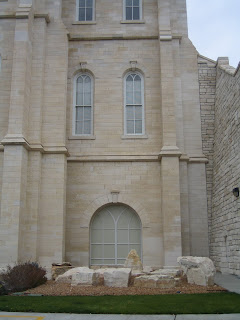 We took a boatload of photos, and I have so many more I'll likely share here again soon.

For now, though, I'm heading off to pack an overnight bag, because I'll be at a writing conference until Saturday night. It should be a great shot in the arm--and a ton of fun to boot, since I'll be hanging out with some of my best writer buds ever.

I hope I'll get a little writing done while I'm there, but when you're sharing a hotel room with one of your best friends, there's a good chance girl chat will interfere!
at October 19, 2007

I'm so jealous! About the writing conference, of course, but even more about your ability to visit the location of your story. I know how some of these details figure into the story, and I can't wait to see how you use the rest.

The conference was great and what awesome photos. I need to be more stuidious about this kind of research. And it was great hanging with you, I'm glad you still managed to get some writing done despite my constant jabbering :-)

You were just a stone's throw from my daughter who's attending Snow College. We were just in Manti dropping her off in August. Even though it smells like turkey farms all aound Manti, the temple is so beautiful. We used to be in the Manti temple district.

We also noticed how close the cemetary is to the temple.

I would never have noticed that there was an old tunnel or that there used to be a staircase--wouldn't it be cool to go back in time and see it as it was when it was dedicated?

How fun to visit the setting for your book.

Thanks for the virtual tour; I've never actually been to Manti. I love prowling around old cemeteries.

You've gotten some great details for your book! Terrific.

Loved seeing Manti through your eyes and knowledge. Thanks.

Great pictures--but why did there used to be a tunnel through the temple?

the conference was fun and I love being with you! Great tour!

Oh so awesome! I loved reading over this blog and looking at all your neat photos.

I absolutely LOVE church history and factual things. I must say I believe you're a true detective to learn all these cool things in order to write your next novel the 'write' way. {pun intended! hehe}

I have never been to Manti before- I always wanted to go. Now that I've read your blog I think i will have to make it happen. We live in Phoenix...so it isn't too far of a drive. About 9 hours. Of course, we'd have to make a weekend of it. Darn.

Keep up the good work Annette! I am constantly amazed at your talent. Oh, and have a blast at your conference...don't forget to sleep!

Way cool! I'm a direct descendant of William Fowler; I'm so excited that you could find his grave.