A Tale of Two Wrists

About four weeks ago, #2 was climbing around some stuff in the basement (a no-no) and fell about four feet onto her arm. She came to me crying and holding her wrist. We iced it and gave her some Tylenol for bedtime.

After school the next day, she was in more pain, and the wrist was swollen. Okay, then, off to the doctor's office. We took her to an urgent care facility, where a nurse practitioner, a doctor, and a radiologist all took one look at her arm and declared that it looked and "acted" broken. To their surprise, they couldn't see a fracture on the x-ray. They made up a custom, fiberglass splint for her and said to come back in a week to get another x-ray.

Not 48 hours later, #3 was out roller-blading, took a turn too sharp, and landed, yep, on her wrist. A neighbor helped her back into the house, and she arrived, howling with pain. We decided not to wait 24 hours like we had with her sister, so off again I trotted to Urgent Care.

The exact same nurse practitioner was working. Since my girls have bright red hair, they're easily remembered. She looked at us and cocked her head. "Weren't you just here a couple of days ago?"

I grinned sheepishly. "Uh, yeah," I said and was tempted to add, "But I really am a fit parent."

Up to that point, we had never had so much as stitches with any of our four kids, and suddenly in a couple of days we had two wrist injuries?

We got #3 x-rayed, and this time the fracture was clear. Even my untrained eye could see it on the film. The good news was that it was a "green stick" fracture, which apparently is the best kind to get because they heal fast. (News to me.)

She was told to return in a few days to be casted when the swelling had gone down. We had to return anyway in a few days for #2 to be checked again, so I made an appointment for both girls on the same day. #3 would be casted, and #2 would be x-rayed again (and possibly casted).

Once again, the x-ray was inconclusive for #2. She got a removable Velcro-like splint to wear for another week or so (a radiologist was going to compare the two sets and give an opinion), and her sister came home with a bright blue cast.

Eventually we got word that #2 didn't have a fracture, although a clear diagnosis wasn't ever given beyond, "Hmm. Maybe she sprained it." The pain has finally gone away for her, though.

And today #3 gets her cast off. Then she'll have to go back to practicing piano. Poor thing.

Below is a picture of their arms. At first glance, it almost looks like it's one person with two injured arms, because #2 hurt her left arm, while #3 hurt her right. 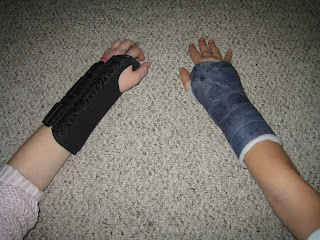 They say things come in threes. So far, we've had two, and it appears we got through the craziness without a third shoe dropping.

Wow! Sorry for your girls. That doesn't sound like any fun at all.

The whole time I was thinking that these things come in threes. Hope that won't happen.

Ouch! I will knock on wood for you and hope that two is the end here.

This will be a funny story in a few years but for now, I can just imagine how embarressing it was to go back to the instacare! The picture is trippy, though. It really does look like one person.

Our oldest had a fracture in his leg when he was about four years old. It didn't show up on the Xray either, but he had some swelling and they did some other kind of scans and figured it out. He didn't have a cast or anything and it healed on its own eventually.

Our family accidents seem to coincide with travel. Kid #3 needed stitches the day I got home from a week in Mississippi. The day after we got home from a big Thanksgiving trip kid #2 bonked into her brother so hard she almost knocked a tooth out and we spent a difficult afternoon at the dentist. So last year when we went to California kid #1 thought travel was jinxed and was certain that he would break a bone as soon as we got home.

Wow, what a "fun" couple of weeks you've had. Do you feel like locking everyone up for a while to avoid any more injuries?
On a different subject: You're welcome to borrow my book anytime.

Sisters! One just can't let the other one get one up on them, can they? I should know, I have two! Aw, well, in years to come they'll look back and have a great laugh about this - "hey, remember that time ...". Painful as it is now, those sorts of memories are priceless later.

well, if it was a shoe dropping, we'd be looking at a picture of a casted foot i imagine. hope they heal quickly.

owwww! poor kids . . . poor mom! I'd have been tempted to go to an instacare across town to avoid the suspicious looks :) Hope for fast healing in the Lyon household!

Ouch! I hope they are both practicing piano again soon.

I promise I'm laughing WITH you, not AT you. How funny that they coordinated their injuries just to make things easy for you (and to make you look like a truly competent mother). I love the photo.