I don't think there's ever been a television show that has had the same social and linguistic impact on English and our culture as Seinfeld. Even though there hasn't been a new episode since 1998, it's still in reruns, and my kids enjoy it (well, most episodes . . . some they aren't allowed see . . .).
Over a decade after the finale, Seinfeld's influence lives on in big ways. Part of that is the fact that the show, which was supposedly about "nothing," was really about everyday life, so there is almost no event that you can't find a Seinfeld episode to relate it to.
Recently, my husband was talking to some coworkers and referred to something as "Seinfeld-esque."
They knew exactly what he meant: something with threads that interconnect in a complex and unexpected way, often at the end, but may have been connected early on and you didn't know it.
He didn't say all that. He just said, "Seinfeld-esque." And they knew exactly what he meant. That's the kind of impact the show had. And has. 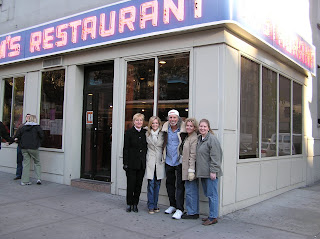 The writing was brilliant, which is why my sisters and I had a ball on the Kramer Reality Tour in New York back in '03 (see above). Mom wasn't all that familiar with the show, so she couldn't quite appreciate references to things like:
I could go on forever. The show was full of gems, and each one listed above refers to an episode that makes me snicker. True fans will recognize every one of those, I'm betting. (And could add many more to it.)
From a Word Nerd standpoint, here's the fascinating part for me:
Even people who say they don't know the show are still familiar with many catch phrases from it.
I had a friend who, during the height of the show's popularity, had never seen a single episode. Yet I caught her using phrases from the show. She didn't even know she was doing it, of course, because she'd never seen it. But the phrases had worked themselves into the culture.
Sometimes Seinfeld coined the phrases. Sometimes the show used already existing phrases, and suddenly everyone was using them because of the episodes that made them famous.
Here's a few:
Yada, yada, yada
This way of getting to the point, skipping over either a boring or secret part of the story, came from a Seinfeld episode where one of George's girlfriend skipped over things like, oh, her shoplifting habit.
Double-dipping
I'm guessing (but I'm not sure) that people used this term before the episode where George is at a funeral and redips his potato chip in the dip and promptly gets chewed out by a family member of the deceased. The scene became so memorable that the phrase promptly became a popular part of the lexicon.
Degift/Regift
An entire episode was built around the concept of whether it's okay to regift, and if so, then can't you also degift?
Hand Sandwich
You know this one: the type of handshake where the other person grabs your hand with both of theirs in a hand sandwich. Annoying.
High talker/Low talker/Close talker
These are all types of speakers who make it difficult to hear what they're saying to you. High talkers have voices with pitches so high they're hard to make out. Low talkers speak quietly. Jerry really could have used a volume control on the low talker so he could hear her request and not end up wearing that hideous puffy shirt on the Today Show. A close talker is a person who has no clue on personal body space.
Mimbo
A combination of the terms "male" and "bimbo." Therefore, a male bimbo.
Vomit Streak
A long period where someone's managed to not vomit, such as a good decade or more.
Shmoopie
An annoying term of endearment between a boyfriend and girlfriend that drives others nuts.
Germaphobe
I'm sure others used this term before the show, but it exploded after Seinfeld.
Rageaholic
Same here.
Little Man
This is sort of the inner voice in your head, your conscience telling you what to do. The voice you should listen to. The one Jerry rarely listens to, of course.
Hand
A version of the concept of "having the upper hand." If you "have hand" then you've got the upper hand in a relationship. If you've given up your superior position, you've "lost hand."
De-smellify
What they tried to do to Jerry's car after a valet driver with beyond BO drove it. Didn't work, unfortunately. It smelled so bad that Jerry tried to let his car be stolen, and even the thieves wouldn't take it.
The Second Button
The series begins and ends with a debate on the location of the second button of a shirt, and how that location makes or breaks the entire shirt. Too high, and it's awkward, too low, and it ruins the look. Scary thing? They're kinda right on that.
Worlds Colliding
We learn about Relationship George and Independent George and how his two worlds cannot mix without Independent George vanishing for good. We've all experienced those bizarre moments where our worlds collide, whether it's high school self and current-day self or work-self and church self.
I'm sure my readers can come up with more.
I read blog posts or hear stories throughout my days, and it's a rare week where I don't come across something that reminds me of a Seinfeld episode. That's how good the show was at understanding humanity and daily life. (It's also evidence that I've watched a few too many episodes . . .)
Recently on a friend's Facebook status, she was having a bad day and wrote, "Serenity now!"
I laughed and responded with, "What you need is a Festivus miracle."
A good chunk of her friends began adding their own Seinfeld references, knowing immediately what she meant. They were all referring to a show that's been off the air for over decade. You can't tell me that's not significant.
A couple of weeks ago on WNW, I mentioned Catch-22. The author, Joseph Heller, managed to get a single word into the lexicon, and it's stuck for nearly fifty years now. I consider that a huge accomplishment.
Yet Jerry Seinfeld and his show got dozens of words and catch phrases into our language. Whether they'll all still be here in fifty years, I don't know. But we're coming on twelve years now, and so far, so good. How did they do that, and what does it mean about their show and our society?
I'm sure someone has studied it, but all I can say is WOW. For our family, one thing it means is that we still TiVo the reruns.
One more:
"Seinfeld . . . four!"
at September 16, 2009

Thanks for this fun post and all the funny memories it brought back. I have Seinfeld moments and references throughout my week also.

I've been to Tom's restaurant and had some great chocolate cake there, but I never took the reality tour. Dang, I should have done it. It would have been fun.

Sadly, I've only seen a handful of episodes, so I don't recognize some of what you're talking about. (I am just not much of a TV watcher, and I never have been...)

But, I do think it's amazing how popular culture can so completely embed itself into language. Very cool.

Thank goodness Jerry didn't choose Cat's in the Cradle for his theme song. I am actually a fan of Seinfeld, as well, but being slightly older I venture back to another show that I liked the best, MASH. Reruns of this show are also available.

Our old apartment was just up the street from Tom's Restaurant. They have the best burgers and chocolate shakes there.

Charlie,
I'd venture to say that MASH and Seinfeld are the two best-written sitcoms of all time. I love MASH--and I often use it in examples when I do writing presentations.

I used to watch Seinfeld religiously. Thanks for the laughs!

I had "Serenity now!" engraved on my husband's iPod (which you can do if you order directly from Apple).

When we were first married, Pizza Pipeline (super cheap) and Seinfeld comprised our Thursday night "date" each week.

I love "pimple-popper MD". And the ham slicer. And Kramer's anguished cry of, "Kenny!" And Elaine the shiksa. All of it.

Like Charlie I'm a huge fan of M*A*S*H as well (we have the whole series on DVD). I don't understand the phenomenon in the least but I do know that if I'd had a hand in the writing of Seinfeld I'd spend much of the rest of my life grinning over how it's become a part of our culture somehow.

I LOVE Seinfeld! I recognized all these fun little words and phrases! What a fun post!

Oh, I love you more today than EVER!

Personally, I'm in love with the Summer of George and "Cantstandja". There simply are no words (literally) for the hilarity of Kramer. The varying range of his shrieking just makes me giggle.

I've seen most episodes multiple times and there's still stuff on your list I don't remember.

I do remember that "No soup for you!" covered a multitude of situations for me and my college friends.

I don't want to be a pirate.

Who leaves a country full of ponies to come to a non-pony county?

I'm out there Jerry, and I'm loving every minute of it!

The summer of George.

Maybe the dingo ate your baby.

So he's a bizzaro Jerry?

I am Costanza, lord of the idiots.

I'm disturbed, I'm depressed, I've got it all!

and now I've swept myself off my feet.

It's Susie, not Suz.

I've enjoyed reading the comments almost as much as reading your post. It brought back so many happy moments of Seinfeld. I just saw the one with the Jr. Mint "miracle from above." It had been a while since I watched a full episode, and I honestly forgot just how funny it really is.

"Oh they're real. And they're spectacular!"

Seinfield was an amazing show, wasn't it. it's one that I'd love to own on DVD. My kids are watching the reruns now and finally old enough to get it--which is a hoot. Great post.

There is not a reference on your post or in a comment that I can't place with the correct episode. I guess I watch a lot of Seinfeld, too. Not that there's anything wrong with that.

I didn't watch Seinfeld very often (not much of a TV watcher), but I am amazed at how much Seinfeld slang I know:) !!

I loved this show. Thanks for a great post!