With the writing conference over, I figured I had roughly four months to pull together a chocolate cookbook. I'd told the managing editor I could probably get her a manuscript by the end of August, and this was late April.
Originally they had pictured a number of recipes somewhere in the neighborhood of their last cookbook: 200. I sort of choked. Since that book included appetizers, main dishes, salads, desserts, and all kinds of categories and this was all chocolate, I asked if we could lower that number. We settled on what still seemed high but at least in the realm of possibility: 120.
120 recipes in 4 months. I already had several recipes in my own stash, plus others my Utah Chocolate Show sister would be willing to help me out with. So it wouldn't really be 30 each month, or one a day. I would be more like 20 or 25 a month, and if I could whip out 2 recipes a day, three days a week, I'd be so golden.
I'd have the recipes done in July and could spend an entire month adding content like chocolate melting and storing information and a glossary and fun chocolate tidbits and all kinds of cool stuff. Then I'd have extra time just for polishing.
This would be a piece. Of. Cake.
Murphy laughed.
What I hadn't counted on is that while I could easily make 2 or 3 recipes in a day, having all of them turn out every time wasn't guaranteed.
Not even almost. I ended up doing EIGHT batches of chocolate cupcakes before I was happy with them.
The first few batches tasted great, but they fell in the center. My kids kept saying I should just call them "Chocolate Bowls" and fill them with ice cream. Um . . . sure . . .
The seventh batch was pretty darn good, and I almost stopped there, but several weeks (and a few dozen other recipes) later I had an epiphany and realized how I could make the cupcakes even better. Being the masochist that I am, I made an eighth batch. (It was worth it.)
Then there was the chocolate brittle . . . which I scorched the first time (and smoked up the house and made the entire family sick with).
Then there was the chocolate marbled pumpkin chocolate chip bread that took six tries to get right.
And so on and so forth.
Some recipes (YES!) turned out great the first time, like the chocolate waffles. Oh, those were good. I celebrated such successes by eating them and then hurriedly typing them up while I could still read my scribbled notes. 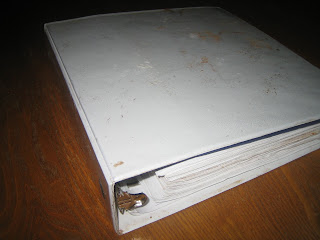 I kept vigilant track of how many recipes I had in my recipe binder: how many did I still have to try out versus how many I'd already succeeded with and how many ideas I still needed to come up. (See my pretty binder above? Note the flour, sugar, and cocoa splotches on the cover.)
The numbers climbed way too slowly.
I'm not a very good cook. I admit to that fully. This was a giant and hard learning curve in both baking chemistry and in chocolate, which is another beast that reacts differently than any other substance when you add it to ingredients.
But I had to learn, and fast.
The cool part is that I did learn. I remember seeing a so-called "recipe" online that was basically thrown together store-bought stuff and thinking, "How lame. I could totally do that from scratch and make it ten times better." A light bulb went off in my head. I jotted down my idea of something similar but oh-so-much better and ran with it. The recipe worked, and it'll be in the book.
I could never have done that a year ago.
But as the summer went on, no matter how hard I worked, the number of successes never came close to climbing fast enough because the successes didn't come quick enough.
(There was also the fact that entire family got sick of chocolate. I once walked into the kitchen, caught a whiff of cocoa, and felt nauseated. I never thought that was possible.)
One of my biggest hurdles was time.
In June, one of my children got a horrid bug and was sick for over a week.
For the fourth of July, we had a family reunion on my husband's side.
Later that month, my husband and I both got some nasty flu bug (I think it was H1N1. The doctor didn't swab us to confirm, but it was going around our neighborhood at the time), and we were both laid out for nearly two weeks.
The last week of July, I had to travel for speaking engagement. Plus I had two children's birthdays, and my son was ordained a teacher, so we had lots of family visiting.
(That last part was a very happy time, but a time-sucker nonetheless.)
The upshot is that by the time the dust settled the second week of August, I knew full well that I wouldn't have a manuscript by the end of the month. There was just no way I could possibly pull it off.
at October 23, 2009

What a project this was!

You must have been so sick of chocolate even halfway through!

I think that's so awesome that after working so hard and learning so much, you found "instinctive" ways to improve on a recipe from scratch! That's just amazing to me. (Clearly, I'm not a cook)

Nauseated by chocolate: that still floors me.

Yeah, I'm with Luisa. And you may be sick of it for the moment, but I can't WAIT for this cookbook to come out.

I had NO idea what it would take to do something like writing a cookbook. I will be much more appreciative of all the hard work, effort and sacrifice that went into it when I get my copy. Thank You!

I guess that explains why I buy cookbooks instead of trying to write them.

It's an amazing amount of work.

I can actually say that I think I would have been sick of chocolate too and, heaven help me, I would never have made eight batches of cupcakes.

Me and the kitchen just aren't that good of friends.

Your efforts will be rewarded- you're going to sell a ton of those books, and I'm going to be standing in line to get one.

Thanks for sticking it out so the rest of the world could know what chocolate perfection tastes like.

Oh, but the delicious things we will be able to make because of your hard work. My husband, mother, children and brothers all thank you in advance! (likely my neighbors too)

So when is the yummy chocolate cookbook coming out???
Sounds divine...

so how long did it take you to eat chocolate again?

I want that cookbook!! And, so would my SIL!

I hope you include all this backstory in the cookbook. Seriously!

I can't wait to see it! I've never felt like a very good cook either, but maybe I'll give it a try with your cook book!

Can't wait for this to come out. I can think of a friend whom I will make VERRRRRY happy with this book.

So...is it done? I WILL buy this! And although I wouldn't want to go through the struggle to do the book, I would certainly love to have the experience and knowledge you've gained as a result. (but I want it downloaded into my brain, because I don't ever want to get nauseated at the smell of chocolate)

Cliff hanger. I'll eat some chocolate in your honor tonight.

A whole receipe book about chocolate ---Oh---My----Gosh Willy Wonka.
How do you keep up with all you deadlines, and books, and posts and well----life in general I guess.

And I kinda like the idea of a cupcake with a dip in the middle for ice cream.

Sick of chocolate???
I don't think we can be friends any more...

I'm exhausted just reading about all of your work. I can't imagine doing all of it. That is just plain crazy. I'm excited for the next installment.

What I want to know is - how much weight did you gain? ;>

Sue, I haven't stepped on a scale in months. There is a reason for that.

But it's probably less than you think, because we were pawning off treats to friends and neighbors (and even throwing stuff away) like nothing else. A taste or two to be sure it worked but enough after awhile. I DID get sick of it.

I'm past that. I can eat chocolate again. I just can't MAKE chocolate yet. I imagine that, too, will pass eventually.