Some time ago I stumbled across a blog post (how and where I don't recall). I was immediately impressed and had a feeling I'd be smart to follow it. I promptly added the blog, The Creative Penn: Adventures in Writing, Publishing and Book Marketing, to my Google reader.
I'm glad I did. 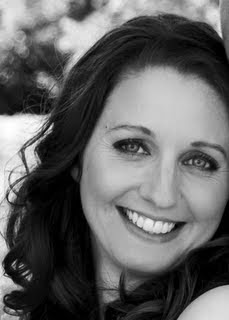 The author, Joanna Penn, has written four books and seeks out all kinds of tips, sites, and helps about writing, publishing, and marketing. She's a great resource for all writers, whether they're doing freelance work, shooting for traditional publishing, or blazing their path on the indie route.

(Is it just me, or does she look a little like Elaine on Seinfeld? And you know how I love me some Seinfeld.)

I enjoy Joanna's posts, Skype interviews, and energetic personality. She's a great tweeter; if you follow me, you've probably seen me re-tweet her, many times. 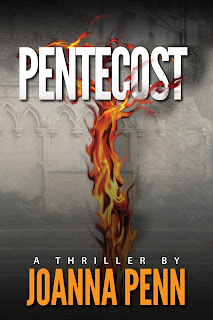 Her first novel, a thriller called Pentecost, is out now on Amazon.com in print and Kindle formats. Buy it TODAY, Monday, February 7, for a chance to win one of her great prizes. (It's all of $2.99. That's less than a good burger, and I'm betting the enjoyment will last a longer than one too! See details on the book's Facebook page. Link below.)
Watch her book trailer (I dare you to not be intrigued by it), and then read my interview with Joanna:

You started out with technical writing and other non-fiction. When and how did the fiction bug bite?

I’ve always wanted to write fiction but I was crippled with self-doubt for years because I thought I had to write prize-winning literary fiction or nothing at all. Then I looked at what I love to read—fast-paced, action-movie style thrillers—and decided to write one of those. I finally attempted to write fiction during NaNoWriMo in 2009, and that became the first few chapters of Pentecost. I loved the process of writing it and I’m already planning the next one. I can’t believe I waited so long!

Where did the idea for Pentecost come from?

I have a Masters in Theology from Oxford and also a post-graduate diploma in Psychology, so I was always going to use my academic knowledge in my writing. Religion, mythology and the supernatural fascinate me so I wanted to explore some of those areas. I also wanted a topic that resonated with people and where the fiction could hang on established tradition. Pentecost and the Acts of the Apostles are known to Christians, but I took the basic idea and then extended the story further without impinging on what the Bible says.

The premise of Pentecost is that the Apostles took stones from the empty tomb of Jesus and wore them as a symbol of their Brotherhood. These stones were empowered at Pentecost and handed down through generations of Keepers who kept their secret, but now the Keepers are being murdered and the stones hunted by those who would use them for evil.

The specific idea came to me when I was in Venice at St Mark’s Basilica looking up at the Pentecost mosaic and I realized that little is known about the Apostles, so it would make for an interesting theme.

What research did you have to do for the book?

As the story ranges across the world, I spent a lot of time researching physical locations. I have been to many of them but had to refresh my memory (e.g. Jerusalem) but also had to write from research for Tabriz, Tunisia and Santiago de Compostela in Spain. I used websites and also Flickr.com for photos to write more visually. I also researched Carl Jung and The Red Book, his journal of a breakdown that I used images from. The synchronicity was incredible as Jung painted a pillar of fire emanating from a stone, which of course, I had to use in the book!

What was the most interesting thing you learned (either for the book or about research)?

The hunt for the stones of the Apostles centers around the locations where their relics are kept, so I did a lot of research on where the twelve men died. Little is written about what happened to each apostle after the book of Acts. Peter’s crucifixion in Rome and John on Patmos are well-known, but for others there are conflicting traditions. So I took as much as I could and then fitted the story around that, which meant that I learned a lot about the Roman Empire and early Christian world.

What is your writing style? Are you an outliner or a by-the-seat-of-your-pantser? Somewhere in between?

I started off by writing the scenes that were playing in my head, mainly the opening and climax as well as scenes in Jerusalem, Venice and Rome. Then I did an outline to join those together with a coherent story. Of course the outline morphed as I continued writing, but it was a good guideline. I used the outline as more of an editing tool to track what I needed to change in the second draft. One lesson learned was that I should be using an outline earlier for faster production of the first draft but still leave room for change as I write each scene.

I’d describe myself as a binge writer! I have a day job and now two blogs as well as a podcast and videos to produce (and a life!), so I have to balance my time. In my productive writing phase, I was up at 5am to write 1000 words before my day job and then scheduled four hours on a Sunday to immerse myself for a longer session. I’m currently in "gathering" phase for the next book and not writing fiction at all, although I write every day for the blog and other places. I anticipate gathering ideas and research for the next month at least before I start another binge writing phase!

From another interview, I gather that you have a “regular job” four days a week. How soon do you foresee the day when you can write full time?

Yes, I work as an IT consultant four days per week, and it is a mixed blessing! I like the income, which means I don’t have to write for money, only for pleasure. I also enjoy the social side and my work is intellectually stimulating in a different way. Fitting everything in keeps me motivated to write, so I’m pretty happy with this way of life at the moment. I do want to be a full-time writer/blogger/speaker, but I see that as maybe two years away at the moment, and it will be a portfolio-style career. I enjoy the writing, but I also love speaking and blogging.

How did you make the decision to self-publish your novel?

I’m basically impatient and a fast worker. I hate to sit around waiting for anything to happen. With Amazon Kindle, you can have your book published in 24 hours, and with print-on-demand, your print book can be for sale in 3 weeks or less. I have a market ready to buy it, as I have built an author platform, so it seemed crazy to wait. I also hate the negative energy of rejection and would rather try to get a book deal by getting publishers to notice me than chase after them.

There are more stories now of self-published books being picked up by traditional publishers after they achieve great sales. So it’s win-win. I carry on writing and marketing, and whether or not I get a book deal, I am selling books!

What is the most important thing writers hoping for self-publishing success to know/do?

It’s critical to use a professional editor for both editorial review and copy editing. You cannot pick up all the problems in your book yourself, and you need your book to be a professional final product. Self-publishing gets a lot of criticism for lack of quality, so please organize editing. Professional cover design is important and will help your book stand out for good reasons.

Building an author platform is also critical because no one will know your book exists otherwise. There’s lots more info about publishing options HERE.

Social media seems to have played a big role in your success to date, Twitter especially. What advice do you have for writers feeling overwhelmed by the idea of social media? (Where should they start, and/or what has made the biggest impact for you?)

It’s important to be into social media in some way now. It’s expected by publishers and agents as part of your author platform, and it’s critical for independent authors as a marketing angle. But you need to choose what is best for you in terms of personality and audience. Different sites have different audiences as well as etiquette and ways to be successful.

I love Twitter, and it’s my focus for social networking although I do use other sites. I made a conscious decision to grow my influence there, so I dedicate time to it. A big mistake people make is to scatter-gun their efforts, and then they achieve nothing and give up. It also takes time. I’ve been on Twitter nearly two years now and spent the first six months in the wilderness like everyone else! Here’s a longer article on how to use Twitter effectively.

Which authors have had the biggest influence on your own work?

In terms of fiction in the thriller genre, I love James Rollins, Matthew Reilly, Michael Crichton and Douglas Preston & Lincoln Child. In order to share more of the books I enjoy, I’ve started a new blog for lovers of the mystery and thriller genre, Mystery Thriller TV. Come and check it out if you’re a fan of the genre!

Any additional advice for aspiring authors?

The publishing world is changing, and opportunities are growing for authors who are willing to write and promote themselves. Ebooks now outstrip paperback sales on Amazon.com, so you can get your work out there without barriers to entry anymore.

If you have ever dreamed of writing a book, now is a brilliant time to do it!

I love the idea of a thriller involving the apostle stones. How cool is that? Thank you for the excellent resources and I'll be sure to check out the book!

Thanks so much for having me on the blog!
@LT - I'm glad you like the idea :)

Thanx for the new author idea and the link--just dropped her book in my cart on Amazon!

Wonderful interview from one binge writer to another.