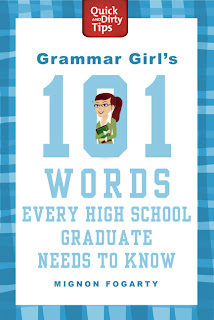 Today's Word Nerd Wednesday post isn't what I expected it to be. I had two of Grammar Girl's books. One was really short. Surely discussion on both books would fit into a single post, right?
So I started with the (short) first one, Grammar Girl's 101 Words Every High School Graduate Needs to Know, by Mignon Fogarty. (If you haven't stopped by to check her out, you must.)
I jotted notes and thoughts on my bookmark (a business card). I didn't think I'd need more room than that. I did. Let's just say that I'll have to talk about the other book another time, because one post simply won't do them justice.
When I first flipped through 101 Words, a few entries caught my eye. (Glacier? Really?) I wondered why Fogarty had included them in a list of words of importance for high school grads. Then I read it. Now I get it. (Yes, glacier. Really.)
The words in this book aren't necessarily ones that high school grads will know if they did their homework. I've seen similar lists for high school grads, and they usually do include boring stuff like hypothesis that grads should know when they get a diploma.
This one's different. If incoming college students knows these words, they'll be a step ahead in cultural literacy and understanding the world around them, whether it's the news, politics and what the politicians are saying (or calling each other), technology (important in today's world), science (ditto), or even pop culture.
The book has a fun tone. It's a quick and easy read with lots of white space (easy on the eyes) and humorous drawings. The words are alphabetical, and every letter of the alphabet gets at least one.
A few of my favorites:
The explanations are easy to understand, and each word gets a quotation to show how it's used. I really enjoyed these; they're totally entertaining. She quotes classics like Shakespeare and Jane Austen, contemporaries like Dave Berry and Obama, and even fictional characters like The Simpsons and House. (The 101st word quotes someone many of my readers will perk up at: Ezra Taft Benson.)
In the end, if you read the whole thing, you'll get more than 101 words, because several entries include opposites and related words.
This is one I'll be keeping on my shelf. And making my teens read.
*I received a copy of the book from the publisher. Opinions are entirely my own. I have standing policy of not reviewing books unless I have personally contacted the author with that intent.
at September 07, 2011

This sounds right up my alley. And what a neat graduation gift for nieces and nephews!

I love it! I think my daughter will too! Thanks for sharing.

I have a question for you. I am getting ready to do a giveaway over on my blog and I am planning on giving Chocolate Never Faileth away as one of my gifts. Would it be possible to purchase an autographed copy from you?

I am getting ready to move to Texas and need to come up with a new blog name so I am asking my followers to give me ideas. Whoever's name I choose to use for my blog will get the gifts.