Today I welcome Christy Dorrity to the blog and interview her about her new release, Awakening. I haven't read her book yet, but I'm intrigued; I love mythology, and her cover is awesome!

I love what she had to say about crappy first drafts (TRUTH, people!), and that she enjoys my good friend Robison Wells' work. Enjoy! 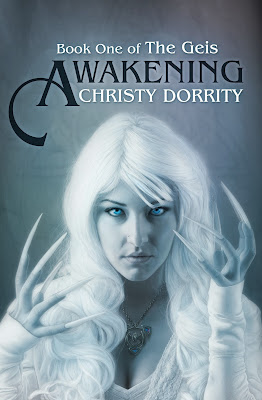 About the Book
. . . because some Celtic stories won’t be contained in myth.

A little magic has always run in sixteen-year-old McKayla McCleery's family—at least that’s what she’s been told. McKayla’s eccentric Aunt Avril travels the world as a psychic for the FBI, and her mother can make amazing delicacies out of the most basic of ingredients. But McKayla doesn't think for a second that the magic is real—it’s just good storytelling. Besides, McKayla doesn’t need magic. She recently moved to beautiful Star Valley, Wyoming, and already she has a best friend, a solo in her upcoming ballet recital—and the gorgeous guy in her physics class keeps looking her way.

When an unexpected fascination with Irish dance leads McKayla to seek instruction from the mute, crippled janitor at her high school, she learns that her family is not the only one with unexplained abilities.

After Aunt Avril comes to Star Valley in pursuit of a supernatural killer, people begin disappearing, and the lives of those McKayla holds most dear are threatened. When the janitor reveals that an ancient curse, known as a geis, has awakened deadly powers that defy explanation, McKayla is forced to come to terms with what is real and what is fantasy.

A thrilling debut novel based in Celtic mythology, Awakening is a gripping young adult fantasy rife with magic, romance, and mystery.

Our Interview
AL: How long have you been writing and how did you get started? (When did the bug bite you?)
CD: Funny, it really was like I got the bug. I was pregnant with my fifth child, five years ago, and all of a sudden, I had this itch inside of me that I couldn't get rid of. I started writing and now, if I go a day without working on writing, I feel unproductive.

AL: Where did the idea for Awakening come from?
CD: My husband bought us tickets to go see Riverdance, an Irish dance show, and I was fascinated by the music and the rhythms. I began taking lessons and soon became enthralled with the Irish culture and mythology as well. When I began seriously writing, it was natural for me to write about something I felt so much passion for.

AL: What research did you have to do for the book? What was the most interesting thing you learned?
CD: Much of the research that I did for Awakening had to do with learning about Celtic mythology. I suppose you could count my Irish dance training as research, and that's the best kind of research, in my opinion. I would have to say that the most interesting thing I learned about is the geis—a complicated curse that I drew on for inspiration in this first novel in the series.

AL: What is your writing style? Are you an outliner or a by-the-seat-of-your-pantser? Somewhere in between?
CD: With Awakening, I wrote by the seat of my pants, and when it came time to edit, my manuscript was a disaster! I have since learned how to structure a story, and I am fully outlining the second book in the series. I'll have to see how it works out.

AL: What is your typical writing schedule like?
CD: I write in the afternoons when my big kids are at school and my preschooler is napping. It is probably my least productive time of day, but it is the only time I have right now.

AL: What is one big thing you've learned through the process of publishing your first novel?
CD: It doesn't matter how crappy my first draft looks—I can go back and fix it.

AL: Why did you choose to self-publish? What was that process like?
CD: I love the flexibility that comes with self-publishing. I can set my own deadlines, and have creative control over my content. The success of my books lie with me, and no one else.

AL: What's been the biggest surprise about the publishing process?
CD: I thought that I would feel somehow different when I released my first novel. That I would feel like I had arrived. But, instead, I'm thinking of the next book and forging ahead. We all know that it's about the journey, and not the destination.

AL: Which authors are your biggest literary influences in the national market?
CD: I love big, sweeping series, such as Twilight and Hunger Games. But I also love small, character-driven stories about every-day people. Tyger Tyger by Kersten Hamilton, and Descendant by Nichole Giles are a few of the books that I've loved recently that have a similar vein as my novel. Other books I've been loving lately are Open Minds by Susan Kay Quinn, Variant by Robison Wells, and The False Prince by Jennifer Nielsen.

AL: In the LDS market?
CD: I have to say that I was very much influenced by Jack Weyland's books as a young adult. His books were real to me and helped me learn in a way that wasn't preachy or forced.

AL: Any advice for aspiring authors?
CD: Believe in your book. Write it, put it out there for everyone to see, and be proud of it. If you don't, who will?

Christy Dorrity lives in the mountains with her husband, five children, and a cocker spaniel. She grew up on a trout ranch in Star Valley, Wyoming, and is the author of The Geis series for young adults, and The Book Blogger’s Cookbooks. Christy is a champion Irish dancer, and when she’s not reading or writing, she’s probably trying out a new recipe in the kitchen.

Email ThisBlogThis!Share to TwitterShare to FacebookShare to Pinterest
Labels: Interview

Thank you for helping get the word out Annette!

Good interview. And, while not my genre, sounds like a good plot!