Know of a sale I missed?
Let me know in the comments!

I shared this book last time it was on sale too, and I'm sharing it again because it was one of my top reads of 2015. SO GOOD.

The Reckoners Series, by Brandon Sanderson 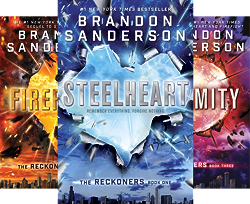 The entire trilogy is on sale, each volume only $1.99. It's an award-winning series by the famed fantasy novelist, now writing for young adults. If you're not quite into the huge epic fantasies but love super heroes, this is your series!

Get each book for only $1.99: SteelheartFirefightCalamity

The Princess and the Billionaire, by Barbara Bretton

A runaway princess looking to start a new life in New York City. A golden boy billionaire who likes his life just the way it is.

She grew up in a castle high in the French Alps. He was born in Queens.

She cut her teeth on caviar and champagne. He loves Big Macs and supersized fries.

From the snow-covered Alps to the noisy streets of Manhattan to the ramshackle cottage in the Pennsylvania Poconos, Isabelle and Daniel fight their attraction to each other every step of the way.

The Last Goodbye, by Caroline Finnerty

Sometimes the decisions we make can last a lifetime . . . and sometimes we cannot shake off the shackles of decisions made by others in the past.

The Last Goodbye is a powerful story of love and loss, forgiveness and new beginnings - a heart-wrenching and emotional page-turner for mothers and daughters everywhere.

Heart and Soul, by Jennifer Youngblood

Don't miss this heartwarming collection of 4 love stories that will feed your need for swoon-worthy romance.
Stories included:

"Kisses over Candlelight"
"The Cowboy and the Billionaire's Daughter"
"How To See With Your Heart"
"Seeking Mr. Perfect"

My Sister's Keeper, by Jodi Picoult

Sara and Brian Fitzgerald's life with their young son and their two-year-old daughter, Kate, is forever altered when they learn that Kate has leukemia. The parents' only hope is to conceive another child, specifically intended to save Kate's life. For some, such genetic engineering would raise both moral and ethical questions; for the Fitzgeralds, Sara in particular, there is no choice but to do whatever it takes to keep Kate alive.

And what it takes is Anna. Until Anna, now 11, says no. Seeking medical emancipation, she hires her own lawyer (Alec Baldwin), initiating a court case that divides the family and that could leave Kate's rapidly failing body in the hands of fate

The Unbroken Line of the Moon, by Johanne Hildebrandt

For fans of Nordic mythology:

In this savage saga of love, war, lust, and magic set in the tenth century, young Sigrid is destined to be the mother of the king of the Nordic lands that would become Sweden, Norway, Denmark, and England.

In these accelerated times, our decisive and businesslike ways of thinking are unprepared for ambiguity, paradox, and sleeping on it." We assume that the quick-thinking "hare brain" will beat out the slower Intuition of the "tortoise mind."

However, now research in cognitive science is changing this understanding of the human mind. It suggests that patience and confusion--rather than rigor and certainty--are the essential precursors of wisdom.

A hilarious and biting memoir from the actor, comedian, and Saturday Night Live alumn David Spade.

David Spade is best known for his harsh “Hollywood” Minute Sketches on SNL, his starring roles in movies like Joe Dirt and Tommy Boy,  and his seven-year stint as Dennis Finch on the television series Just Shoot Me.

Now, with a wit as dry as the weather in his home state of Arizona, the “comic brat extraordinaire” tells his story in Almost Interesting.

Disclaimer: If I find new deals throughout the week after the post has gone live, I'll update it and note anything new. As always, the responsibility to confirm any price before purchase is up to the reader. Titles listed in deals posts may or may not be ones I've read, and determining what books are right for you, including any content issues, is also the reader's responsibility. Posts include Amazon affiliate links

Waiting for You by Heather Moore is free until Friday the 5th.