A Friend's Success So Sweet

There's almost nothing as exciting as holding your first book in your hands for the first time.

So it was a little weird to be feeling as giddy and excited as I was last Saturday when I held Counting Stars by Michele Paige Holmes in my hands. I mean, it wasn't my book.
And yet, in some ways, I felt a tiny bit of ownership in it, sort of like a midwife might feel. No, that's not right, either. That implies that I had more to do with the book than I did. Cheerleader, maybe? That's not enough. I watched this baby grow, develop, take its first steps. I feel like its mother, but I'm not. Great aunt, maybe? 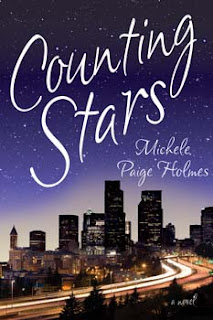 I tend to wax long when I back-up too far in my stories, but this one goes back a long ways. Bear with me. :)
I met Shauna Andreason (hi, lady!) in a social dance class at BYU back in, well, the Jurassic Era, maybe. I had no idea at the time that our husbands had served their missions together. I also didn't know that we'd end up living next door to each other as newly weds. We're still awesome buds and close friends.
Fast forward several years: Shauna meets another great friend in her new Provo ward, Michele Holmes, an aspiring writer. At the time, I'm also an aspiring writer. I joined a critique group a few months prior, and thanks to Shauna, Michele and I meet at a League of Utah Writers meeting. Eventually, Michele joins our critique group.
We both have a very bumpy ride as we learn (the HARD way) that we aren't that great of writers (okay, to be honest, I had more to learn than she did), we had A LOT to learn about the craft, about how to put a book and characters and a story together. There are times when I've left our meetings frustrated because she's so dang talented and I feel like a hack. (I've even blogged about it, and I'm hereby revealing who MH is.) Our group has morphed and changed over the years. Seven and a half years later, though, we're still plugging along. What started out as mostly wannabes has turned into a group of polished, published writers. Every one of us has sold our work. Heather and I were unknowns when we joined, but we've managed to make pretty darn good names for ourselves in this market, as have Jeff and James. Lynda has sold several stories to the Friend. Lu Ann has regular newspaper columns and has sold articles and other pieces as well, and so on.
Michele has consistently wowed me with her talent. She's spent years pursuing national agents and getting fabulous feedback but rejections nonetheless, largely because she doesn't write the in the standard formula. (She's realizing that to GET INTO the national realm, you often have to write that way, and then you can break it, no matter how many agents say they're really looking for something different. Hah. No they're not.)
Jeff, Heather, and I (the three of us from the group who publish with Covenant) have spent the last year wooing Michele to the "dark" side (in other words, trying to get her to submit to the LDS market). She finally did. We knew that her talent is so dang amazing that she'd be a shoo-in.
We were right; Covenant snatched her newest book up in no time flat.
Now it's in stores. It's not your typical formula romance. But it IS a romance. A killer of a romance. It's poignant. It's drop-dead hysterically funny. It will make you cry. It has twists you won't see coming (because yeah, it's NOT that formula!). It's different than anything you've ever read in the LDS market. And it's GOOD. (This coming from someone who is notoriously picky in her reading material.) It pushes the envelope just a bit. It's refreshing. It's fun.
And by golly, I'm so dang excited to see Michele's face on the bio page and her name on the cover.
I've been working like crazy to get my book to press lately, but I've still managed to sneak in a few chapters of her book here and there. Even though I've already READ the thing in critique group (a couple of times) and know exactly what's coming, I still laugh. I still cry. I still shake my head and think, wow, Michele. You are one talented writer.
Congratulations, woman!
at June 14, 2007

How inspiring! You're a great friend, and your writers' group is lucky to have you.

Many thanks, Annette. Though I would beg to differ as to who had more to learn. You are still light years ahead of me, and I'll never dare submit anything without your thorough eyes reading it first.

Thanks for awesome editing and mostly for being a wonderful friend.

I tagged you for a meme today. I hope you'll find a few minutes and play!

Man, I wish I still lived in UT so maybe I could start hanging around in your circles. Perhaps you could still rub off on me in cyber-world? I've sold two articles to the Ensign, but I have much higher aspirations!

Jenna, Seriously, try coming out to the LDStorymakers Writing Conference in March. It's a terrific conference and a GREAT chance to rub shoulders with a bunch of awesome people. I always leave with batteries charged. If you attend, you can then sign-up for an e-mail Storymakers' sister list of aspiring writers so that when you go home, you still have that contact. The next conference is March 21 & 22 in 08 in Sandy. Check out my blog about the last one--Lisa Mangum from Deseret Book was so impressed that any submissions she gets that say they attended jump to the top of her pile.