I recently came across a blog that talked about older sisters' influences, and boy did it ever transport me back in time. The author of the post has a sister seven years her senior who molded the younger into a devoted Duran Duran fan.

I know from personal experience just how powerful an influence older sisters can be. In fact, my being a writer is essentially because of her.

Mel is about four years my senior, and while I’ve heard her scoff at the idea that she should be held on a pedestal, for most of my childhood, she not only was on one, but I buffed said pedestal daily.

If asked which flavor of ice cream I wanted, I’d have to think, Hmm. What flavor would Mel want? If she was present, I’d take a peek. Pralines and Caramel? Make that two, please.

She was so grown up, and I wanted to be just like her. She took advantage of this.

Such as when, in third grade, she learned the multiplication table and cursive. Ever the vigilant devotee, groupie, and/or apprentice, I wanted to know what she knew. She enjoyed playing school and recognized an opportunity presenting itself. She took the worksheets her teachers had already corrected, erased her marks, and made me do them.

Keep in mind here: I wasn’t even in kindergarten yet.

Yet Mel was giving me timed tests on the multiplication tables as I curled up with a pencil on the kitchen floor. Then, tongue sticking out of my mouth, I painstakingly tried to write my name in cursive—even though I could barely PRINT it.

Enjoying our teacher/pupil relationship, Mel moved our "school" to other subjects. She gave me hands-on projects. I remember (and no, I’m not making this up) being assigned the task of creating a shadow box model of the solar system.

Once she pulled a volume of the encyclopedia off the basement bookshelf at random. It fell open to the anatomical drawings of a horse. She promptly informed me that I was to memorize all the muscles.

When I went into my kindergarten pretesting and Mrs. McKay said, "Can you write your name?" I happily complied—in cursive. "Alrighty then," she said, looking a bit puzzled. "Let’s try that again . . . "

We think my horrendous handwriting is due to the fact that I learned cursive before my motor skills were ready for it. To this day, Mel willingly bears the blame. I’m happy to give it to her instead of, oh, taking responsibility for being too lazy to write cleanly.

But I can thank Mel for getting me into writing because when she was in sixth grade, she had these brown notebooks that she’d scribble stories in. And of course, I thought that was an intensely cool thing to do, so I had to do it, too. I wrote stories and had her read them for "feedback." At the time, I didn’t actually want criticism. I wanted my icon to rave about my wit.

But being as we already had a teacher/pupil relationship, she wanted to mold my writing into Pulitzer material. After all, she WAS in sixth grade. When she told me my story about a sniffing cat wasn’t brilliant (it had too much smelling in it; it wasn’t funny), I was devastated. But I was bound to make her proud and try again.

Years later, she took a hardbound blank book and started writing about personal beauty and makeup. (She was a mature teenager of fourteen at this point and knew about womanly stuff.)

Naturally, I trotted in her footsteps. I purchased a hardbound blank book and wrote what I knew about—big kid stuff. She never finished hers, but I did finish mine. It was called Helpful Hints for Kids.

I mentioned recently that a screenplay was my first completed work. Looking back, I realize that’s not quite accurate. This little tip book was really my first one. Interestingly, Ardeth G. Kapp (although she doesn’t remember this) even took it to Deseret Book in the mid-80s and pitched it to their editors. They said no (being as there was zero market for that kind of thing at the time), but they thought it was a great effort from a kid.

So they contacted The Friend magazine, which did a feature about me. By the time it ran (a year or two later), I was actually a second-year Beehive (they got my age wrong), but hey—it was my first sort of published piece ever, and they even paid me to use some of the pages of the book in the piece.

So in some ways, I can thank Mel for setting my feet on the path of writing. What started out as a little more than copy-catting has become a life-long journey and passion for me.

I'm a big sister too, but my little sister Michelle and I are only two years apart. I attempted to play teacher/pupil, and she rebelled since instead of seeing me on a pedestal we were more like peers. We ended up playing bank/post office/grocery store, having eraser wars across our beds, and staying up late at night behind our parents' backs talking on our purple phones that really worked. But that's for another post.

Below is a picture of me with my sisters at the Gala (I think it's the only recent photo I have of the three of us). Mel's on the left. Michelle's on the right. 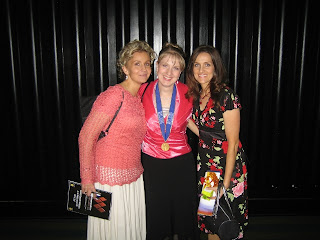 Oh, Annette! I LOVED reading this! How wonderful to have such a relationship with your sister(s). I'm disappointed that Deseret Book didn't publish your tips book, but I love that The Friend did!

I'm so glad you came by my site today (and thanks for the linky-love!) and I'm so glad to meet you. I expect to enjoy many wonderful reads here at your blog!

Great post, Annette. I grew up always wishing for an older sister or brother--especially when I became a teen. I thought it would be great having someone's makeup to borrow, or a brother bringing home his friends for me to date.

But now, looking back, I see many skills I developed because I was the oldest--creating stories to keep the others quiet being one of them.

I see one of my granddaughers, who is the oldest of seven, becoming quite the little mother already. She also teaches the others whenever she gets the chance, and her skills as a responsible babysitter are outstanding.

Thanks for letting us get to know your super sisters. And good luck with this year's chocolate show.

Mel is awesome, what a team you've turned out to be. I'm the middle of five sisters (with 4 boys bringing up the rear) I think we were all to busy hating each other to inspire greatness.

This is SO fun. I'm the oldest, so I love reading about life from a younger sister's perspective.

How fun to read the article about you in the Friend!! You just rock!

Ah sisterhood! What a great thing! That was fun to read about you and your sister. It makes me want to call mine and remind her that she made me do all her laundry until I was old enough to know I was getting snookered. :)