Knit One, Purl One 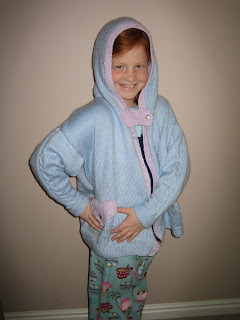 At long last, I'm making good on my promise to Luisa by posting photos of my daughter's jacket that I knitted. I'm the first to admit that it's nowhere near the cutest thing I've ever made with my knitting needles (for starters, I much prefer the one I made for her in kindergarten. It had two beautiful tones of cranberry red and ivory in a checkerboard pattern, make of luxurious wool yarn . . .).

But she was five then, and I got to do the picking. Now she's coming on eleven. She has her own opinions and desires, so she designed what she wanted me to make. Which meant I had to invent the pattern. It sort of worked. At least I made it big enough that she won't outgrow it too fast.

I actually began this project about a year ago, and although I finished it awhile back as well, I'm only now writing about it. The thing is, the story behind this jacket makes me see how amazing it is how a little detail in your life can lead to something so much bigger.

But I'll get to that in a minute. 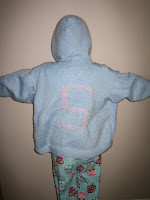 The first thing my daughter did was pick the light blue and lavender colors. She didn't care what the yarn was made of; she just cared about the colors. Then she informed me that it would need a big S on the back (her first initial). The letter didn't turn out as great as I had hoped (and it took me forever to figure out how to invent a pattern for it--and it ended up lopsided), but at least it's recognizable as a letter.

She also asked for pockets on the front (and picked out darling little heart buttons for them). The one thing I added to her design (with her approval, of course) was cables on the sleeves (those braided looking things going down each one. I love doing cables). 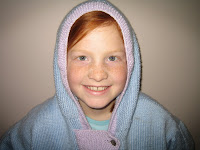 The next thing she insisted her jacket have is a hood. This posed a slight problem, seeing as I had never made a hood and didn't own a single knitting magazine or book that had a hood pattern in it.

So I did what all good modern mommies do: I turned to the Internet in search of a pattern. I found a couple, but not quite what I was looking for, including one that had such convoluted instructions I panicked and moved on.

It was during my search that I discovered Knitty Magazine. I trolled through their web site and after reading a few pieces, thought that hey, I could write something for them. I wouldn't send them a pattern (I'm not THAT good . . .), but they also publish fun essays.

So I wrote a humous piece about how I got started knitting, and they bought it. (You can read it here.)

A short time later, I got a bunch of e-mails from readers who had found the article and clicked on my contact information. They came from all over the U.S. and even a few European countries.

All but one of the messages fell into two categories:

1) My, your daughters have gorgeous red hair (Yes. Yes, they do, I'd reply. Aren't my girls cute?) and

2) How can I get the pattern for the pink sweater? (I'd tell them what book I got it from.)

But one e-mail came from a reader who, I'm assuming, went to my web site and deduced rather quickly that I'm LDS. (Not tough to do, really, when I have book covers with temples on them.)

She contacted me saying that she lived in New York and was also:
1) LDS
2) A writer
3) A knitter

What are the chances of someone being all three of those and reading my article?

The reader was none other than Luisa of Novembrance.

We soon began a cyber friendship, and I got lucky enough to meet her in person last summer when she visited Utah (and enjoy lunch . . . and a sundae . . .) We soon discovered that we have a lot in common besides those three things.

Through her, I've met several other awesome blogger friends like this one and this one and many others. In turn, she found a bunch of bloggers through me, such as many of the LDStorymakers.

Over the last year, I've found a great friendship and source of support through Luisa.

Oh, and my daughter got herself a jacket she loves.

Who knew that a simple search for a hood pattern would lead to all this?

Post script to finish the jacket story:
I never did find a suitable hood pattern. I ended up inventing my own, using a hood from a jacket we had around the house as a model.

I'd never heard the story of how you and Luisa knew each other. How cool is that??!!

And how frickin' brackin' cool is that jacket!!!!!

The jacket turned out great! I'm very impressed. And she obviously loves it; what a great mom you are.

And what a great friend you are! Thank heaven for Knitty....

What a gorgeous jacket! And I loved the Luisa story. We all benefit from you two meeting, because she's now a firm fave on lots of LDStorymaker blogs.

Oh, neato! Friends can be found in all shapes, sizes, colors and blogs. hehe

Your knitting is so pretty and I love the make-shift hood that looks just as god as any I've ever seen. Except hands of love made it. ;)

Ohhhh, I'm SOOOOO bummed, Annette!!
I ordered 2 of your novels from two different sources. "House on the hill" & "At the journey's end".

I've been patently waiting and then today one comes...and I was so excited! Uh, oh- It's 'Journey's End' and I can't dive into it as I'd hoped because it's the sequel to "House on the hill'. Oh, the pain, the agony, the hurt! This is not something I can easily recover from. The only remedy: To WAIT for 'House on the hill'. Whhhhaaaaaaaaaa

Wow, I'm way impressed because I also knit and it can be long and tedious. I have never made a jacket, only smaller less time-consuming projects like blankets, booties, slippers, hats, scarves, and baby buntings. When my son said he was freezing on his mission in Italy, I whipped up a "manly" scarf and sent it to him. I love to knit on a snowy day next to the fire. I love to buy yarn (Simply Soft is my favorite) and I have a collection of patterns and knitting books. I hope to get back to knitting one of these days and I'll look up Knitty Magazine--what a cool story about Luisa!

The world is just a nicer place because Luisa's in it, isn't it? That's my take, anyway.

Is there no end to your talents?! Wow!

You incredibly talented woman, you! Not only do you make cute knitted jackets, but you make darling children as well! :)

It came! 'House on the hill' made it to my home and I'm so thrilled!

Autumn, you cracked me up and made my day. I feel so evil enjoying the fact that the arrival of the wrong book first could upset you even a little. :D Hope you enjoy them both!

You are amazing--you probably bake bread everyday too, don't you? I figured that because I was a writer I was exempt from having to produce any sorts of crafts. Now you're making me look bad.

ps Your daughter is a doll!

Wait! I commented! Where's my comment? Darn. Oh well, I just went and read your Knitty article and just wanted to tell you how great it was. And thanks for the love. I'm glad to know you too!

Where in the world do you find the time to KNIT TOO? You are just too fabulous!

Soooooooooooooo Do you give lessons? I have always wanted to learn how to knit.

Your daughter is beautiful, so is the jacket, and because you met Luisa, we all got to meet her too!