I wish I had a picture of a particular moment at the LDStorymakers Conference. It was one of those times when your worlds collide, although it wasn't traumatic like when George from Seinfeld was at risk of being destroyed when Relationship George collided with Fun George, but it was a funky moment nonetheless.

After a session on Saturday, I walked over to a table to grab my things. Standing beside it were three people.

Jeff Savage, who has been part of my critique group for about six years, joining just a couple of months before my first book, Lost Without You, was accepted for publication. As the first man in our group, he's been a great asset. We finally had a guy to tell us when our men were acting like sissies. Of course, he's also known for his "Well, I really have just one comment," critiques. When you hear that, brace yourself. The "one thing" is probably major. And darn it all, he's usually right.

Here's a picture of Jeff at the Whitney Gala before presenting an award . . . giving a "talk." You can tell that the figures at the bottom are in their "pre-author" life, because they don't yet have their blogs . . . (That talk will go down in Whitney history. It was hysterical.) 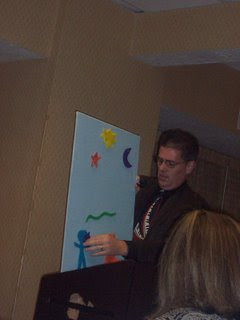 Angela Eschler, my beloved editor who has been the one who worked so tirelessly on all five of my books. I'm not a person who deals well with change. Consequently, when she recently left Covenant, I came close to flipping out. (Fortunately, she left me in very good hands. Kirk totally rocks.) Below is critique group gal pal Michele Holmes at the Whitney Gala (left) with the amazing Angela. 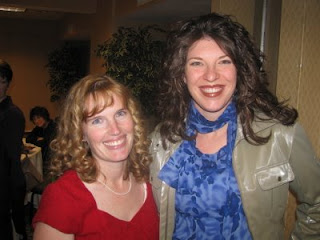 And the last person of the trio was Sarah, one of the Babes that Spires is dedicated to. I've known her since the 8th grade when we started our L.M. Montgomery fan club. We were part of a tight-knit group of friends in high school, took creative writing together our senior year, and in college collaborated on a novel. She was the first person to give me honest feedback. As we wrote together, she freely told me when I had suggested something really dumb . . . and when it absolutely worked. The first time I tried writing a book on my own, I panicked; I didn't have Sarah there on my shoulder to guide me.

And we both have way too many things we could blackmail each other about.

Here these three people from very different areas of my life were standing together, chatting. I had to smile.

And then I thought about all the frightening stories they could share with each other about me.

I can picture it now:

Jeff: You should have read that pathetic opening chapter Annette brought to critique last time. I mean, really. Holy lame. Well, okay. The writing was good on a sentence level. Of course there weren't any grammar or punctuation errors. She's the stinkin' grammar police. But the overall arc didn't work. I really just had two comments. But if she takes my advice, she'll be rewriting that chapter for a good month.

Angela: And I bet she used a dozen semicolons. I can't count how many of those I've had to take out of her books, and she argues over every one of them. Touch-y.

Sarah: Just try drafting with her. [shudders] She's such a control freak. But she listened to me, at least most of the time. If she hadn't . . . man, our book would have been a sappy mess.

In all reality, each one of them represent an important part of my life, and I'm grateful for their friendships and the impact each one has had on my life.

As soon as I can get my hands on some of the other photos taken at the conference (since my own camera hung out at the bottom of my bag the entire time), here are a few I do have. If you've been reading other blogs about the conference and Whitney Gala, you may have seen several of them already.

Here I am right before the dinner at the Gala, with my sweet husband at my side: 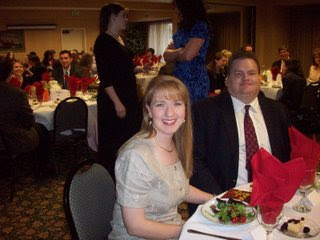 With Whitney winners Michele Holmes and Heather (H.B.) Moore. All three of us began attending our critique group as unpublished but hopeful writers. It's amazing how far we've come. 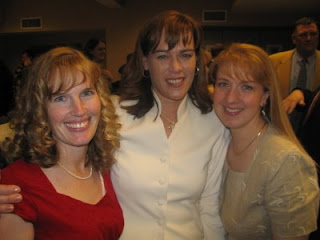 Hard to see, but this is right after I read the winner's name for Best Romance/Women's fiction and got to give the award to the very-much deserving Michele. Also pictured is Lisa Mangum of Deseret Book. 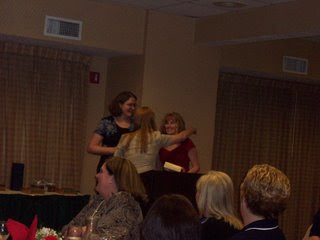 Two years of conference "Queens." Heather and I flank Josi Kilpack and Julie Wright, who were the conference chairs for 2007. As the conference wrapped up, they presented us with big boxes of chocolate. They know me so well. 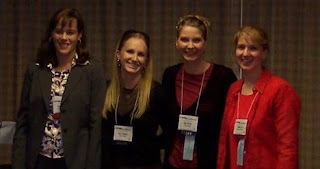 I have read about these fun awards on several blogs now. It seems like everyone had a fabulous time! Congrats on being a published writer!

Oh, I love all those photos! Your dress is gorgeous.

"Worlds are colliding" is something P and I say all the time.

We actually did have that conversation--how in the world did you know? :)It was so fun to get a peek into your world and I was very impressed by the quality of that conference--thanks for inviting me.