My local library has a lot of fun throwing parties for families. They do at least two every year, and they're quite the productions.

For years they had a Harry Potter party each summer around Harry's birthday. (Last year's in celebration of the final book was mucho cool. Totally blew me away.)

And there's the an annual princess ball, which they always connect to a neat theme (this year it was Chinese new year).

Kids often dress up for these things, and there's always a ton of fun activities connected with the theme. Families come in swarms. It's a big deal.

This year the fantasy party focused on a new series. Yesterday, the library turned into Fablehaven. The lengths to which they went for the celebration were stunning. Among the features of the night:


The big draw of the night was the author of the NY Times bestselling series, Brandon Mull, showing up to talk and then sign books for an insanely long line.

As in the past, I was once again roped into helping with a library party, and this time I got to be one of the hags running around, doling out curses. (As soon as some kids realized that chocolate lifted the curse, they kept coming back for more curses. I had to put a limit on how many times I'd curse the same kid.)

I struggled at first on what to wear, but finally put together something I thought worked okay. You can't see all the glory in this picture (the huge rusted earrings, the thick gray witch stockings, the torn and ragged shirt, the moles, the blackened teeth). But as I trotted out to my kids to get opinions, they all shrieked.

I guess it did the trick: 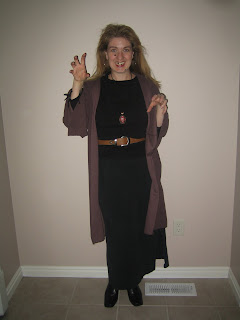 A lot of people showed up in costume (mostly preschooler girls as fairies), and my family came to enjoy the evening as well.

When Brandon himself arrived and mulled around, I thought I should go say hello, because while we're not exactly close friends, we had met before when we sat at the same table at the Whitney Awards dinner in March. And I don't know about him, but fellow writers are always a happy sight for me.

But I don't think he recognized me. I mentioned my name. Nothing. That we were at the same Whitney table (WHEN YOU WON. REMEMBER THAT NIGHT?!). Nothing seemed to turn on a light bulb. I think he was stuck staring at the black teeth and icky eyebrows. He just smiled and nodded.

It was all I could do to not tell him that while I think Fablehaven is a really great series, that no, I'm not a weird fanatic woman who dressed up like a hag just for his party like most of the six-year-old fairies running around had. I was there working as a vol-un-teer.

And I'm a fellow writer. We have a ton of mutual friends. Oh, and I was a Whitney finalist too. That night, I presented one of the awards. Ring a bell? Rob Wells mentioned during the ceremony that I came up with the name of the award?

Hmm. How about: I was the only one at your table who didn't take home a trophy?

Never mind. Next time I'll be sure to talk to a fellow writer (NY Times bestseller or otherwise) when I'm, oh, not sporting two gigantic moles on my face.

But hey, I got my daughter's book signed. Before the actual book signing. So there. :D

What a fun way to promote a book. Hope I get to do something like that sometime--as the writer would be my preference. Oh, and I remember you from the Whitneys. You looked beautiful.

Ooh! I wish we had gone now! We love the Fablehaven books and you look like you are straight from the pages!!! cool costume!

Too funny! Sounds like you have a great library.

What a fun event--but very lame he didn't know you. I mean, you're ANNETTE LYON, how does that go unknown? I don't get it.

Yeah, I know. I mean, come ON. My name alone is so recognizable. :D

This sounds so fun! I want to hand out curses at my library. (Perhaps the librarians wouldn't appreciate this though . . .)

and i dare you to put that great photo of you in/on one of your books where the author is highlighted. that would be a hoot.

hey, thanks for coming by my bloggy and leaving sweet comments. you are a sweetie, kathleen

How fun! I wish I'd been in town for it. And you look great!