I'm Tagged; You Get Chocolate

I don't get tagged all that often, but on Sunday Amanda D from The Little Things tagged me for this one I'd seen going around blogland: 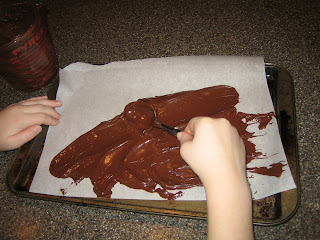 This is my daughter's hands as she makes the first layer of Chocolate Bark. I took pictures of her doing the entire process as part of a query for a girl's magazine article. The department I was shooting for likes recipes girls her age can do with little to no adult help. Chocolate Bark totally fits.

I'm far from a chocolate expert, but I have had some fun with it, and I've collected a lot of recipes. At some point (in the relatively near future, I hope), I plan to write a chocolate cookbook. More on that another time.

In case you're interested, here's how to make it. (Some day I may post more specifics, like how to actually melt the chocolate and so forth, but today, I'm going for simple.)

Melt three kinds of chocolate, making sure you don't overheat them (they'll seize, turning into a grainy, icky mass). Then stir them a bit to get some air into them, cool them down slightly, and to get the chocolate tempered right so it won't bloom.

You'll be using different amount of each chocolate, so decide how you want to layer them. I prefer to use dark chocolate for the bottom layer (the most you'll use), milk chocolate for the top layer (you'll use slightly little less), and then white or some other fun color for the drizzle (you'll need the least of this one).

Spread the first layer of melted chocolate into a 1-2 mm thick rectangle.

Spread the second layer of melted chocolate on top of the first, leaving a small margin so the first shows around the edges.

After putting the final kind of chocolate into a zip-style bag (some day I should post about the nifty trick for filling the bag), seal it off and snip the corner with scissors. Use this as a decorating bag to drizzle over the entire surface. If you're using a color that contrasts well with the other chocolates, the effect will be really cool.

Put the cookie sheet into the fridge and leave until the chocolate is set, half an hour or so, depending on the thickness. Remove from the fridge and break by hand into bite-sized pieces.

Just for fun, here's the final shot we took of the project: 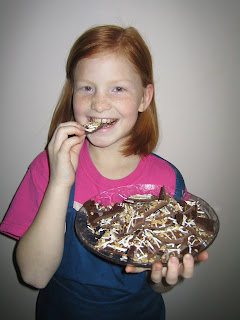 For the tagging (I don't remember where all I saw this tag, so forgive me if I'm forgetting to tag someone or forgetting that you've already been tagged!):

This would be fun to do with my activity days girls. Thanks!

I was so hoping this was going to be Chacon, but bark is good too.

I love this tag. I don't know what it is about it? Maybe the mystery of what the sixth photo might be, or how random they sometimes are. Fun stuff!

And now I want chocolate.

Oh, my. I refuse to read the recipe portion of this post until I have lost my last eight pounds. Yum, though!

I've never purchased parchment paper. Is it so much better than wax paper?

This bark looks so good. Your daughter sure looks happy eating it!

Well, I don't have a single picture on my computer since my husband brought it back to life, but I'll have HIM dig up his sixth on his sixth and I'll post that. If it's a good one. Well, he's a good fotog, so it'll be good either way.

I've done this tag before, only it was the 4th picture and the 4th folder.
So, I suppose we'll find out what's 6th and 6th now. (I'm like Heather, I like this tag because of the mystery involved!)

YES! Chocolate. I would expect nothing less from you.

Thanks for the tag!

Thanks for playing along! And for the recipe. Good luck with your chocolate cook book. :)

That's a fun game of tag. And even better that it involved chocolate! (For those that like that sort of thing. I know, I'm in the minority.)

Yummy! If you need tasters for research for your cookbook, I'm available! You should know I give all chocolate great reviews. And you wouldn't have to pay me either!!!!!

Looks like something my kids would love to do and that we all would love to eat. On of these days I need to get going on that 20 lbs I have to lose ...

Do you cool it between layers? This looks like a fun treat for my daughter and I to make.

I want the chocolate cookbook yesterday.

It shall be done!