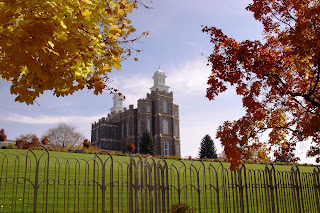 Of all my temple books, House on the Hill tells more about its temple than any other. The Logan Temple is almost another character, it's such a big part of the story. Even though there are more stories in that book, plenty more aren't in it. Here are two of my favorites.

Carpeting the Temple
The original plan was to purchase factory-made carpet. 1,516 yards were purchased, but that wasn't nearly enough. Worse, the order had pretty much depleted the supply available. What to do?

Superintendent Charles O. Card asked the committee for permission to use handmade carpets. As soon as it was granted, stake Relief Societies were called on to band together to make the carpets.

The women donated rags, which were torn into strips at rag-tearing sessions. The strips were then sewn together by color and rolled into balls. The balls were taken to a weaving machine, which created long strips of cloth. They then sewed the strips together carefully so the carpet wouldn't twist or bulge.

As they were sewn together, the carpets were stretched across a room, tied to doorknobs on either side, to help keep them square. Some wards had to work together on pieces for the larger rooms to make sure the pattern remained consistent.

In spite of how hard they worked, the women weren't able to complete quite all of the carpet on time. The last of it was delivered to the temple on Tuesday, May 20, three days after the dedication. The carpet was installed all that night, with the last bit being laid at 8:00 AM, barely in time for ordinance work to begin that day.

In all, the Relief Society sisters made 2,144 yards of carpet, about two-thirds of the total 3,660 yards in the temple. The homemade carpet remained until 1925, when it was replaced by store-made carpet, with the exception of one bit, which hung on in one of the towers until 1959. When it was removed, that last section was cut into pieces, which were given to officiators and others. Presumably, one piece is still in the temple office.

The Hay Baler
One of the saddest stories in the construction is something I wanted to tell in the book, but I couldn't find a natural way to fit it into the plot. Since I refuse to throw in irrelevant history just for history's sake, I reluctantly left it out. So I'm going to tell it here instead.

Since the construction era was well before things like gas-powered cranes and other motorized vehicles, much of the power came from animals like horses and mules who hauled stone, pulled ropes on pulleys to raise stone blocks, and the like. (I do tell about Old Jim the donkey in the book. Fun story there.)

As a result of the animal labor, they had a temple stable where the work animals were fed and housed. For many families, their donations for the temple consisted of hay for the animals. To keep the hay in good condition and to be able to distribute it easier, they needed a baler.

Nolan P. Olsen describes it as being, "15 feet high, consisting of a large wooden enclosure, with a hole through which the hay was pitched. A large flat rock was rigged up so it could be hoisted up high by horse power, and when it was tripped it would fall into the enclosure and mash the hay flat."

The 300-500 pound bale would be tied up with ropes or wire and then stacked for later use.

One day the rope got stuck, and they couldn't trip the rock to make it fall. The workers couldn't get the rope to loosen or the stone to budge. At that point, a young man of 13 years, John Hincks, put his head inside the baler to peer up in hopes of seeing what the problem was.

Of course, that's the moment the rock tripped on its own. It came down and crushed his head, killing him.

The death of John Hincks was the first connected to the construction of the Logan Temple, but while it wasn't anywhere near the last, to me, it's one of the most tragic because he was so young.

As his grave marker said, he was "Like a flower in bud just bursting into view."


Today's tour stops:
Is It Just Me? (Featuring the Lunar Temple and a new face for me!)
Heather Justesen
at April 06, 2009

Email ThisBlogThis!Share to TwitterShare to FacebookShare to Pinterest
Labels: House on the Hill, research, temples

Oh, how sad!! I can't imagine watching that happen. Everyone must have felt so helpless.

And I'm trying to picture how the carpet would look based on the description of the manufacturing process. It sounds like a backing they were making. Did they not pull any wool through the backing? Was it more flat like woven fabric?

Wow, what an interesting history! I've only been to Logan twice in my life, and the second time was last week. I would love to do a session there.

That story is very tragic, but I assume it was probably his time to go. (Although I hate when people say that!)

The carpet is very intriguing. Like Mina, I'm trying to visualize how it actually looked from your description.

I wish there were pictures of the carpet.

What a tragic accident. It doesn't make any sense.

I very much enjoy your entries about historical temple facts.

That is a terrible tragedy. What a beautiful marker. He must have been loved very much.

I've never been to the Logan temple but I have a strong desire to do so. I think I shall have to plan it.

The Logan temple was the first temple I attended as a youth. We took a huge bus and traveled 13 hrs. to go there. I am still madly in love with it today. It is one of my favs.

Thanks for sharing this great history trivia. Loved it. See ya tommorrow.

I love the Logan temple, it's where all of my history is. I went once with my mom and a worker told us a story about the walls. When they renovated the temple, they painted over all of the murals (I guess it used to look like the SL temple). The prophet (I think Pres. Benson, but I'm not sure) said that it was the biggest mistake they should not have done. He said it was tragic to lose all of that history. I guess they regretted painting white over all of those beautiful murals, and since then, they have learned and not painted over others (in other temples) that they have renovated. Anyway, I don't know if that makes sense, but I thought it was kind of a cool story. Thanks for sharing those cool stories about the temple I love.

Touching stories. I loved all of the temple detail in your Logan temple book and was a little disappointed that you didn't add more temple incidents to the other books in the series, though I loved the detail of the Honeymoon Trail in Journey's End.

I've always thought the Logan Temple was one of the coolest looking temples, and I've heard that there are some great stories in it's history.

I'm sure this is another great book!

It was fun listening to conference this weekend because there were several talks (at least 3) where the speaker alluded to something about temples and because of your research posts, I was able to fill in the details mentally. Thanks! I even read my husband your post about settling St. George.

Aw, what a sad story (but thank you for not forcing it into the book. I hate when you can tell how hard the author researched from what s/he forces/dumps in there).

So some of that carpet was still there when my grandpa went to be sealed to his parents there in 1947!

(When we drove out in 1997 and attended a cousin's wedding there, we heard about the '47 trip ceaselessly. It wasn't until we were in SLC and saw some sesquicentennial lit that we started teasing him about coming with the pioneers in 1847.)

That is a sad story.

I would love to have seen those carpets. That's neat. And not sad at all. :)

I didn't know these stories. Thank you for sharing them with us!

Oh...that's sad. But thanks for digging that up to share with the rest of us lazy people! :)

I thought of you during conference when the man who was called on a mission just after losing his farm was talked about. When they mentioned him getting a call to go and grow cotton, I thought about your post about that.

That story caught me totally off guard, I thought it was going to be something funny. NOT. Poor boy, his poor parents.
I LOVE the homemade carpet, that is awesome!

I so enjoy reading these stories as they are amazing. My oldest son was married in the Logan Temple.

You are so stinking cool. I would never know any of this if it weren't for you! Thanks for all the cool trivia!

The second story is so sad...We take for granted nowadays what it took to build temples. Thanks for sharing these stories.

I love coming over here and learning something. I have never been to the Logan Temple but after reading this I hope to someday do a session there. And now I want to read your books. :)