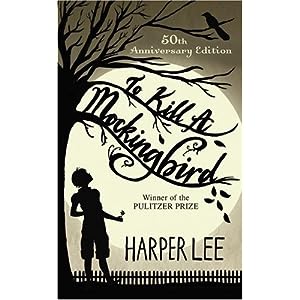 This month marks the 50th anniversary of the publication of Harper Lee's classic novel, To Kill a Mockingbird.
I was first introduced to the book my sophomore year of high school. I really enjoyed it, I'm sure in large part to a great English teacher (Hi, Miss Drummond!) who helped us students "get" that the story is so much more than what the first page proclaims it to be.
As teenagers (and kids who hadn't experienced racism firsthand, for the most part) we saw Scout's world through Scout's lens. She opens the story by saying that here are the events of one summer that led to her brother Jem breaking his arm.
And yes, that's true. Everything in the book pretty much leads up to the night Jem breaks his arm. But who did it, the underlying motivations for why, and how Jem ended up having only a broken arm instead of losing his life entirely . . . that's what the book is about.
Through Scout's interactions with the townspeople, her father (Atticus Finch, one of my all-time favorite characters), and Boo Radley, We learn about stereotypes, racism, goodness, justice, mercy, strength, weakness, courage.
We learn about doing the right thing even when you know the result won't be happy.
We learn to not judge others . . . especially when you have no idea how that other person may be your guardian angel after all.
It's a powerful book that has impacted millions of lives.
It's also the only book Harper Lee ever wrote. Many have guessed as to why she never published again. Any interviews she grants (a very rare occurrence, indeed) are on the condition that the interviewer does not mention "the book."
Count me as one person who has read and reread the book, a reader who loves Scout's innocence and fire with her school teacher. I'm one of millions who vividly recall Atticus pulling the trigger to save the neighborhood from a rabid dog (and shocking his children at the fact that he's a sharp-shooter who never shoots), of Atticus sitting beneath a single light bulb next to a cell that housed an innocent black man, in an effort to protect him from a potential white mob. Of Boo saving the lives of the children he'd come to love.
If you haven't read To Kill a Mockingbird, do. I recommend the movie as well. Gregory Peck captures Atticus perfectly. A very young Robert Duvall shows up briefly at the end as Boo. Harper Lee let them use her father's own pocket watch in the opening credits. And word has it that even she was pleased with the film adaptation. High praise.
Harper Lee is still alive, although she's getting on in years. Here is one great article about the history of the book, her reclusive life, some possible reasons for staying out of the limelight and not writing anymore, and about the anniversary of the publication.
An estimated 40 million readers have been impacted by Mockingbird. Here's looking forward to another 40 million in the years ahead.
Note #1: This weekend was my turn over at the AML Blog.
Note #2: WEDNESDAY is my 4-year bloggy-versary. There will be PRIZES! If you or someone you know wants to sponsor a prize to advertise your business, let me know right away.
Note #3: Remember that you can download a free sample from the new and rewritten version of Lost Without You . . . and that you don't need a Kindle to read it.
Note #4: Those with Sony Readers, Nooks, and other e-reader devices: Can you get Kindle software? I know the iPhone, iPad, Blackberry, and PC can. I'm trying to figure out of I need the book available on other platforms. Any insight would be welcome!
at July 19, 2010

Email ThisBlogThis!Share to TwitterShare to FacebookShare to Pinterest
Labels: Kindle, Lost without You, reading pleasures

I've only read this book once, in high school, but I loved it.

I have an acquantaince who named her little girl, Scout. I always thought that was so cool.

Man! I wanted to name my girl Scout after reading this book too!!! Of course, by the time we had our girls we we actually Boy Scout Leaders... so it lost it's appeal a bit.

Still love - I think I should re-read it in honor of the anniversary :)

I'll offer "Alma the Younger" (the book, that is) as one of the prizes for Wednesday :)

I just finished reading TKAM maybe three days ago, in celebration of the 50th anniversary. I know! You didn't think I was that deep, huh?

I've always thought of it as a story about emerging from darkness into light. Even without having seen the movie, the image of Atticus illuminated under that single bulb as he faces down that mob which is still in darkness is incredibly evocative. And there is so much to be said about the "Christian" missionary woman who is the only character in the book to use the word "darkie".

Start to finish, it's a beautiful story that everyone should read at least twice.

I love To Kill a Mockingbird, and I thoroughly enjoyed your book, too. (I read it on my Kindle.)

I really loved that book and movie. Probably the only movie I ever did really enjoy after reading the book.

I can't use a Kindle book on my Nook. I can use almost any other format. But Kindle is exclusive (kinda like Apple iTunes) and therefore not loadable on the Nook. Bummer!!

Ya know, I have never read the book...only seen the movie.
books are always better. so much deeper.
I better get to reading it eh

interesting that the author never wrote another book

My all time favorite book.

2. I have an autographed copy of To Kill a Mockingbird from the 40th edition re-release. I keep it in a glass box next to my first edition Huckleberry Finn (I know!)

3. I am angling to name our next daughter Harper. Still working on that one.

I have been meaning to read this book. I've seen the movie and liked it. Thanks for the reminder to put that on my summer read list.

It's one of my all time favorite novels, too. Thanks so much for posting the link to that article on Harper Lee. I had no idea so much of the story came from her own childhood.