Thought I'd post a few pictures of what I've been up to lately.
In September, I went up to the League of Utah Writers Round-up conference. Due to mommy commitments, I wasn't able to stay the entire time (next year, I hope!). I did some one-on-one manuscript critiques for Precision Editing Group. At the hotel, Josi, Heather, Julie and I wrote, laughed, ate snacks at a bakery, and ultimately buckled down to go over mutual scenes from the Newport Ladies Book Club series to make sure they all match.
(We had to finish that over the phone Saturday night, since I was no longer at the hotel.)
Saturday morning before my critique sessions, I spent some time with my laptop. I literally kicked off my heels and typed away. Unbeknownst to me, Josi snapped a picture.
I believe this is the only photo in existence where I'm drafting something involving the military wives from Band of Sisters. Here, I'm working on the sequel (as yet unnamed). The book is about the re-entry time after the husbands come home. 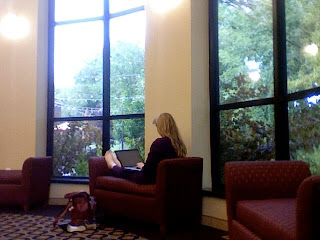 Above: Me, hanging out with Marianne.
Later in September was the triple launch party for Josi, Sarah, and Mel. Because I'm smart like that, I didn't get picture of them, but here's one of some of us who were there: 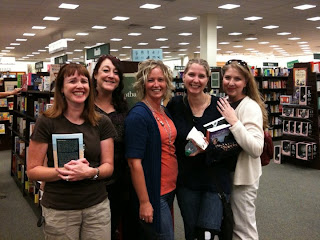 Pictured: Mindy and Sheila from the LDS Women's Book Review
and novelists Becca Wilhite and Julie Wright, with me on the end.
Then on October 6th was a day my entire critique group has been waiting for: the release party for Robison Wells' Variant at The King's English bookstore.
First we gathered in a small room to hear Rob speak. It was super inspiring and totally awesome. Here I am right before Rob spoke, with critique group member Michele Paige Holmes. 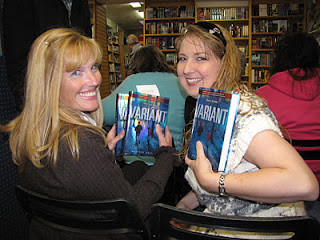 (Image from Krista Lynne Jensen's blog.)
After Rob spoke, we had yummy refreshments and an insanely long line to get books signed, plus lots of friends and writers to chat with (I'd name drop, but I know I'll forget someone). I even got to meet Rob's parents, who are seriously cool people.
Here I am with Rob at his launch with my very own signed copy of VARIANT: 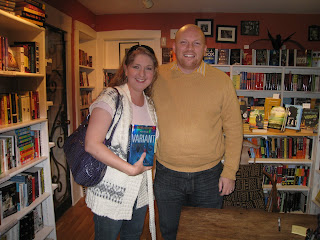 I actually have two signed copies, one for me, and one that I'll use as a giveaway sometime in the future.
Coming in about a month: I get to attend the Authors Incognito writing retreat. If I can keep up my drafting goals this month, I should be able to finish the BofS sequel at the retreat. Then it'll be time to get it hammered by critiques and alpha and beta readers, revision, and, soon after that, I hope, submission.
Of course, I have several other pots in the fire as well, but that's my biggest focus for now.
Also:
Something for local writers out there to be thinking about: in the first quarter of 2012, Precision Editing Group will be doing another live critique workshop like the one we did in August. Be sure to watch for the date announcement and registration information. It was a great experience last time, and you won't want to miss out.
Here's a picture of my workshop table from last summer. They were awesome, and we had a great time! 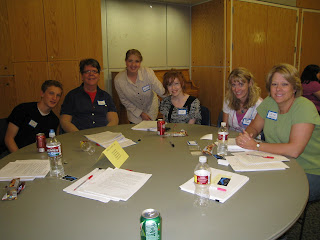 Busy girl! You inspire me daily.

It's so great to be busy with such wonderful things. And I love that you're writing BofS2! You're so cute on that seat with your toes up!

What a fun picture of you in action!

I am looking forward to the sequel.

that all tires me out!

and still SO excited for the sequel...

in learning more about the writing/publishing process I am constantly amazed at the amount of work that goes into each and every sentence...

oops, on that note I just realized I have some feedback to send off before the author gets annoyed with me!

How did you miss taking a picture of us together at the fudge table at Mel's (et al) book signing? And I could have taken one of you, writing, right there in the middle of Barnes and Noble. So apropos!

Also, I'm bookmarking this post because you talk about a ton of stuff I didn't even know about but kinda think I should.

Wow. It's great to have you as a friend!!