WNW: The Influence of a Madman

If you've frequented my blog for any significant period, you know that I adore and rely on the Oxford English Dictionary (known as the OED). An entire blog label is devoted to my references to the beloved OED (including this post!). I turned to my most beloved dictionary a lot when writing my historical novels. (Was "cookie" used in the 1880s?) Many friends ask me to check the OED for similar reasons. (Among them, J. Scott Savage, author of The Fourth Nephite books, to be sure he's got the 1830s lingo right.)

This post will have two parts:
(1) What is the OED anyway? (What makes it different from any other English dictionary out there?) (I've covered this briefly in past posts, but it's been a long while.) (Yes, I know that multiple sets of parentheses is atypical.)

(2) What does a madman have to do with the OED? 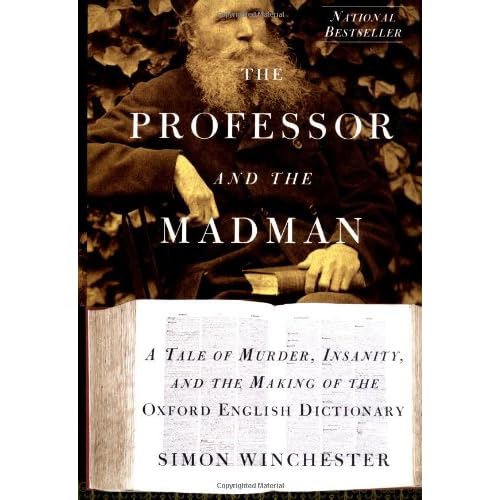 What Is the OED, Anyway?
In 1857, Professor James Murray began one of the most ambitious linguistic projects of all time. His goal: to create a dictionary that went beyond definitions to recording the first instance of each word used in print. His dictionary would show the change and evolution of the language.

Understandably, the project took years and years. An entry in the OED lists quotations from multiple sources, so you can see when a word was used, fell out of use, and came back. How the meaning has changed over time, and so on.

During my university days at Brigham Young University, I often walked past a copy in the library. It sat atop a waist-high bookcase, which the blue volumes covered in two full rows with somewhere around 30 volumes. (In that edition. It's longer now.) The OED is constantly being updated, as new words constantly enter the language (today more than ever).

My dad owns the shrunken-down version of the OED. It's only two volumes long, but each page has four complete, miniaturized pages. And no kidding, the set comes with a magnifying glass because even someone with 20/20 vision would go cross-eyed trying to read that puppy.

I own a CD version of the OED from about 10 years ago. I got it for my birthday one year and use it regularly.

What does a madman have to do with the OED?
While working on his dictionary, Professor Murray sent out calls for help in looking for early printed instances of specific words. This wasn't a one-man task. Even with help, completing the dictionary would take decades. And this was way more than a century before computers. Many people sent in slips of paper with quotes and sources.

But one man came to Murray's aid more than any other, somehow managing to find the time search for words hours on end, constantly, eventually submitting over ten thousand quotes, including many obscure words Murray wrote to him about, specifically assigning him to look for.

What Murray didn't know was why this man, Dr. W. C. Minor, had so much time on his hands: He was an inmate at an asylum for the criminally insane. A murderer.

You can read the true story, which reads like a novel, in a book I love: The Professor and the Madman: A Tale of Murder, Insanity, and the Making of the Oxford English Dictionary, by Simon Winchester.

I read it years ago, marked it up, and still count it as one of the most fascinating non-fiction works I've ever read.


Oh, and if you're on Twitter, be sure to follow @OEDonline for fun word nerdiness throughout your day!

See? Only crazy people are as obsessed with words as you are. ;)

I love The Professor and the Madman, and I love the OED. I have the edition your father has! I bought it when I was 21, and it has served me faithfully.

I'm trying to find the recipe and instructions for your chocolate molds. I bought the chocolate never faileth book but can't find anything about making the chocolates. Can't wait to try them!

I stumbled upon your blog this morning and have to comment on your use of the OED to verify historical usage. I am glad that Shakespeare did not have such habits, or Julius Caesar would have been written entirely in Latin. Certainly, none of the characters in that play would have used any English words.

Of course, it would be ludicrous to hear Lincoln describe the end of the civil war as "groovy". And, if Sigmund Freud were to respond to a patient with the phrases "OMG" or "TMI" it would, certainly, sound unauthentic. But, I think it is safe to say that if you need the OED to ensure that a word is historically accurate, you could safely use it without creating confusion. Remember, you're writing in the vernacular.

An extreme example is the film, A Knight's Tale. The movie uses devices from our time to create a context that makes the story accessible to its audience. Of course, it's ridiculous to see a knight's supporters with their heroes crest painted on their faces like an NFL fanatic. But, it was a humorous device and made the point it was intended to make.

So, I would say that if the inaccuracy is undetectable to your reader, ignore it.

Thanks for dropping by!

While I see your point, that's not quite what I meant.

For example, a good friend of mine, Sarah M. Eden, writes Regency romances. If she were to keep all of the language in her books entirely accurate, it would be harder to access for today's reader, so she lightens it up a bit with somewhat more modern usage.

YET she's careful to make sure that vernacular, fashion, food, technology, and so forth are absolutely accurate to the period.

Readers expect to be given accuracy on those things, and when I was writing historicals, it was important to me to be as accurate as I could.

As far as language, it mostly meant checking to see if a word had entered the lexicon by the year the story was set in--so not using "groovy" in the 1800s, using your example.

That said, some stories work with--and even because of--the inaccuracies, such as A Knight's Tale. That's one of my all-time favorite movies, and it's filled with inaccuracies. It works because it's totally open with that fact and never pretends otherwise.