One of my earliest posts here was about my long-time friend Sheryl. By long-time, I mean since we were all of four-and-a-half years old, when my family moved two houses down from hers. We spent so much time together growing up that we both practically had two homes.

At a recent lunch (see my last post), I finally remembered to get a picture of the two of us together.

Since I'm guessing most readers didn't read the original, here it is again (although now the time period involved is twenty-nine years . . .), along with a photo of the two of us.

Now you can answer the burning question for yourself:

Do Sheryl and Annette look alike?

What do you think?

Since it’s been happening for twenty-eight years, you’d think I’d be used to it now, or at least I’d be able to figure out why it’s happening. But no.

When I was four it made some sense for people to mistake Sheryl and me for sisters, twins, or each other. It doesn’t take much for two chubby-cheeked, strawberry blonde little girls with pig tails to look alike. Have them play together a lot, and they’ll naturally end up acting and talking like one another.

But when our baby fat melted away and my hair lost any trace of strawberry (Sheryl kept hers) and mine was a plain old dishwater blond, people still thought we looked alike. Maybe it was the pigtails. We still wore those.

The worst case of the identity mixup was around second grade when I took dance lessons. The studio picked you up for class in a van and dropped you off afterward. I had gone to my first dance class the day before, and now my sister had hers. The van pulled up just as Sheryl crossed my lawn to come play. The driver assumed the girl had to be my sister since she looked like me.

When he tried dragging her to the van, saying, "Come on. You don’t want to be late for class," poor Sheryl thought she was being abducted.

The look-alike thing continued all through high school. When people saw our prom picture, they’d say, "How neat! Twins taking twins to prom!" Not quite. Twins taking a pair of childhood buddies to prom.

On Sheryl’s birthday our senior year, I passed out dozens of suckers to the student body with instructions to give them to Sheryl and wish her a happy birthday. If they didn’t know who she was, I’d say, "She looks like me," and immediately I’d get, "Oh, yeah. I know who she is."

By the time we went to college, we were adults with our own hairstyles, fashion tastes, different heights, and different majors. But I’d still get high school alumni yelling across the BYU quad, "Hey, Sheryl! How ya doin?" I’d wave back and make a mental note to tell Sheryl that so-and-so says hi.

Sheryl and I have since married and had kids. We live apart and see one another maybe once a year. Not long ago I arrived at the school with my kids to see a lady who had grown up a street away from me. Our sisters and mothers were both great friends. Immediately her face lit up and she said, "You’re a Stringham!"

I laughed and said, "Close. Two doors down."

We keep finding new variations of the old theme, like with my sister, who has always insisted she could never see the Sheryl/Annette resemblance. Recently at church, she reached down for something and saw a woman across the room—upside down from her vantage point. "Wow," she thought, "That girl looks like Annette." When she righted herself, she realized it was—you guessed it—Sheryl, who was visiting for the day.

Or the time Sheryl’s son saw my picture in the back of one of my books and declared, "Mom, she looks like you."

But the most unusual variation came last April [2006] when my friend Jeff Savage came to speak to my ward book club after we read his House of Secrets. His wife, Jennifer, came along. I’ve known Jen for years, and never once had we ever gotten asked what we were that night:

"Are you two sisters?"

We looked at one another and with a laugh, shook our heads. I took another look at Jen and thought, "Wow. I never noticed that Jen looks a lot like Sheryl."

Sheryl and I used to joke that some day we’d end up in the same nursing home as old ladies and be able to fool the nurses.

Ha. Like we’d still look alike in another fifty years. What are the chances of that?

With twenty-eight years down so far, the chances are looking better all the time. We might as well start planning how to really have fun switching places and confusing the nursing home staff.

Just so long as they don’t mix up our medications or give me her enema. 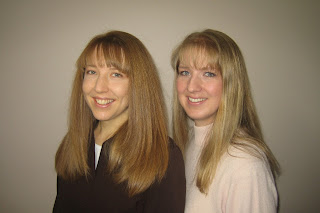 Okay, folks, now here's the picture, taken just days ago. Do we look that much alike?

Hmm. I've kept the cheeks (as we all know . . .) and she's lost hers, but maybe there's still some resemblance.

Wow! I'll say! Must be that the two of you were friends in heaven and had to look alike so you'd recognize one another here. So cool!

Yup, I agree! But another interesting thing is that they say that really good friends grow to look like each other over time. Or do you think this is just some weird fluke?

wow - the likeness between you two is amazing!

Wowzers! That's just plain shocking. I would definitely mistake you for twins!

that is amazing! you DO look alike!

Okay, I don't see it. At all. You're both adorable, but I would never mistake you for sisters. And I'm feeling dumb because I disagree with everyone else.

Luisa, I'm glad I'm not the only one who can't really see it. We've had a few pictures in years past where there is some resemblance even for me, but this one I thought we really looked different. I wondered if I should dig into my old stuff and find a better example. Maybe our prom picture is lurking around . . . You're not the only one. Several of the Babes swear they can't see it, either.