My partner on the university summer ballroom team almost didn’t ask me out.

We’d spent every morning for a good chunk of the summer dancing together. I’d gone out once with another guy on the team—a boy that, while nice enough, didn’t exactly impress when he went on about how desperate he was to get married.

Over the course of the summer, my partner and I became great friends, and yeah, we flirted a bit. But I kept talking about how I was going to serve a mission, and he took me seriously on that.

I don’t remember the first time I saw him, but I do remember the first impression I had of him. It was early in the summer before we had assigned partners and instead the guys rotated between the girls every few minutes. He was my last partner of the day, and I remember thinking, Wow, this guy can really lead, and we work well together. We both finagled things so we’d end up assigned together, and we had a ball all summer long.

During that time, the film Strictly Ballroom came to theaters. I thought it would be a great excuse to hang out—ballroom is what we did, right? It wouldn’t necessarily be a date . . . I was going on a mission, remember. And I insisted that I didn’t like him like him, although when my friends asked about him, I had a hard time sticking to the story . . . . and not blushing.

He and I made plans to see Strictly Ballroom, but then it left the theater before we had the chance. Here was this guy who wasn’t afraid of a smart girl with a scholarship (big points in my book), who could quote Shakespeare for crying out loud, and who had the warmest chocolate-brown eyes ever, and my one excuse for seeing him off the dance floor had fallen through.

Fortunately, he decided that we should still see a movie, so we went to Sleepless in Seattle. Best first date ever. No awkwardness at all. We already had inside jokes and plenty to talk about. It did take him awhile to stop looking for me four inches taller than I really was, because he was used to my silver Latin-heels-enhanced height. That first date turned into many more.

He proposed on my birthday, and the following spring, we were married. It’s been fourteen years now, and each has been better than the last. Today we work together better than we did in our fancy dancing shoes and costumes.

I love you more! 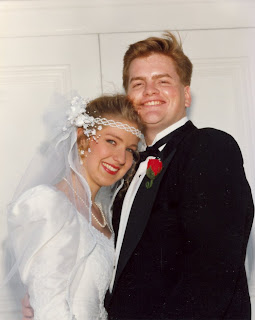 I used to do ballroom dancing, too, but it has been a LOOONG time. You should put up some clips of you and your husband dancing away!

I love your story, Annette. :) So sweet and fun!

Happy Anniversary. What a cute picture. It will be 14 years for me in July.

I loved your story.

My daughter is one of your biggest fans and is going to like you even more when I tell her you met your husband ballroom dancing.

She dances to and insists that's how she's going to meet her husband.

What a great story -- and a beautiful wedding picture! Happy anniversary!

I'm sorry; I find myself a little choked up. Excuse me for a moment.

I love the photo! But now I'm coveting one featuring the silver Latin heels.

Awwww--how sweet! I guess there's no need to ask where those cute little hed-headed kiddos came from. You two make a great pair. Congratulations!

Okay that picture of you is simply stunning! You are always beautiful but man aree you ever glowing in that picture. I loved the movie striclty ballroom and love to ballroom dance. Kudos to you for marrying a guy who likes dancing . . . It is my huaband's one flaw that he doesn't. It is a measure of my love for him to overlook that one flaw. ;)

I love "how we met" stories. Yours is a great one. Happy anniversary.

Thanks for sharing your story. What a great picture!

I forgot to ask if you two still danced together? That would even be better!