Attack on the Grammar Fascista

My family is out to get me.

It began a few weeks ago when #2 left the piano bench during her practice time and sought me out in the kitchen.

Before I could answer, I had to clear my throat and get my face under control. Then I launched into a speech about count nouns versus non-count nouns and therefore the proper usage of less and fewer.

“It drives me crazy,” I told her. “Commercials mess them up all the time. It’s not less calories. You can count calories, so it’s fewer calories. It’s not like time or flour, which you refer to in general quantities—less time, less flour. So it should be fewer calories. Fewer, people! Fewer!”

(For any other grammar fascistas out there, I don’t hold to the antiquated school of thought that one must use “may” in requests such as these instead of "can." I’m not a savage.)

The song really was easy. Normally the kids are required to run through all songs five times each, but I decided to be flexible. “Fine,” I said. “You can play it three times today . . . if you ask me again using fewer. Say, 'fewer times.'”

She grinned. “Awesome, Mom. Thanks! Can I play it fewer times?”

“Yes,” I said, glad to have bestowed such a great grammar lesson upon my offspring.

As I turned away, she shot out, “Less times!” Giggling hysterically, she bolted into the living room.

“FEWER times!” I yelled after her.

That exchange has since snowballed into the family finding glee at torturing me. They’ve always known that Mom’s a bit of a nut when it comes to grammar and usage, but they’ve never used it against me.

I don’t even know how the conversation got started the other night at dinner. All I know is that suddenly everyone was thinking up horrid grammar mistakes and hurling them across the table just to see the vein in my forehead pulse.

My husband even got into the game. Knowing one of my all-time pet peeves, he found ways to inject imply and infer into every conversation for the next few hours. He purposely (and rather brilliantly, I might add) used them wrong every single time.

That night, by the time I had on my pajamas, I was on the verge of calling for a strait jacket.

But after a good night’s sleep, something wonderful dawned on me. If my family knows enough to use incorrect grammar just to tease me . . . they also know the correct grammar because I’ve taught it to them. 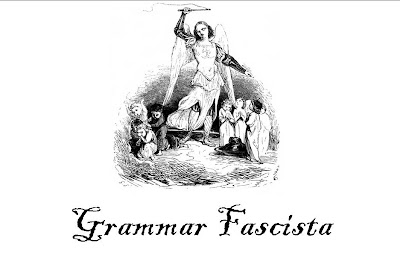 Note: Thanks to Luisa, the Ultimate Grammar Fascista (one of the highest forms of praise I am capable of), for the use of her banner.
at April 24, 2008

Email ThisBlogThis!Share to TwitterShare to FacebookShare to Pinterest
Labels: family, my inner editor

Gotta love kids who finally understand how to give Mom a hard time. It's good they do understand grammar enough to do it. I wish I were a little better at it.

You are a well writer.

You DO win! Excellent.

Reminds me of the "Tastes great/Less filling" commercials. (And since 'filling' is non-count, Madison Avenue got it right on this one.)

Growing up, my best friends' mom was an English Professor. Language-skewering games were all the rage at their house. She was by far the best, because she had the strongest grasp of the rules.

The fact that your family knows how to intentionally butcher their grammar shows you have taught them well.

Haha, that sounds like me.
I can't stand it when people use incorrect grammar and the wrong word....grrr hehe.

Love the blog by the way ;)

Funny story. Any family that gets into grammar wars is on the right track. I had an older brother who would poke me with his fork at dinner if I ever used faulty grammar. I guess I should thank him for that.

That was awesome! I was thinking the same thing: if they know how to mess up on purpose just to annoy you, then...

hehehe, so cute how they know how to torture you. you done good! hehe