1) My son is going to grow taller than me in a few months. I'm so not ready for that.

2) The other day, DD5 proclaimed her requirements for the boy she will marry someday:

When pressed, she admitted that making sure he's NICE would be a good idea as well. ("Like Daddy," she decided. Couldn't go wrong on that one.)

3) I've been an avid watcher of American Idol since the very first season. It's the one show hubby and I TiVo and then watch together, often when the little ones are asleep. This year the turbo-giant cell phone company, Nokia (based in Finland, my other homeland), is a sponsor.

Now you'll all know what a total nerd I am: I was so pleased to hear Ryan Seacrest pronounce the name of the company correctly; most people don't.

The stress of any Finnish word is always on the first syllable. Sheesh, people. It's not like it's an insanely difficult language. Oh, wait . . .

4) On a similar note, I've been brushing up my Finnish (once fluent but accented, now covered in brain dust) by reading the Book of Mormon in the language. I have the online English version in front of me so I can consult it when I come across passages that I don't understand.

I'm doing pretty well, except for those Isaiah chapters in 2 Nephi. If I don't understand it in English, what are the chances it'll make any sense whatsoever in Finnish?

That, and even though I attended Finnish public school for three years and could speak with the best the grade schoolers around, you decide how likely it was that I would learn the Finnish terms of things I run into regularly in the scriptures.

During just today's scripture reading, I had to check the English version to translate several words.

Yeah, those are words I used in everyday conversation when I was 12 . . .

Okay, I probably heard "nostrils" from some boy classmates. But the others? I don't recall any conversations involving soothsayers or bats.

5) And finally, because it's just too good NOT to post, here's next year's conference king, Jeff Savage, being a total sport after I "crowned" him with all kinds of goofy stuff like "gauntlets of courage" (silver oven mitts) and a crown my daughter helped decorate with foam hearts and glitter. (The red sleeve is mine.) 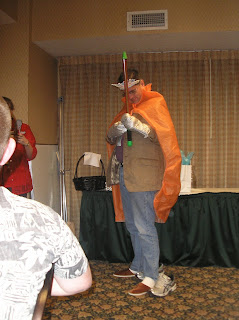 I am all over American Idol this year! In past years I've usually given up after the first few ridiculous weeks of horrible singers (ya gotta admit that is hilarious!)
I'm not sure why I'm so hooked this time around but I am loving it! Perhaps it's those cute and very like-able LDS contestants

Wait. Don't I get to give last year's queens gifts next year. Heh, heh, heh!

Thanks for comning to crtique last night even though you were on your death bed. Feel better soon.

Oh, wait. Crap! You give me presents. I guess I'm just toast. Unless I start a NEW tradition.

Your daughter is so cute to be making her list already! Jeff looked great in his crowning moment. And you have an excellent point about Isaiah. We're reading scriptures as a family and I swear my kids really do get glazed over looks as we read through thosepassages. I have a swedish edition of the BoM. I should try out your language brush up skills idea.

Good for you for brushing up on your Finnish! Hopefully you can reward yourself with a trip at some point.

My oldest son is now 6 feet tall. The rest of the crew is growing fast. I am resigned to my runty fate.

Luisa is hardly a runt. That would be me. :)

And I love that your daughter has it all figured out with men.

Your blog is hilarious and so are your daughter's requests for a husband, all of them being essential. I'm glad I found you on the web!

Your daughter is just too cute!

Finnish - sheesh, Annette. I'm just impressed you ever learned, retained any portion of it and now you're reading the Book of Mormon in it? Holy Cow!

I decided, after Alvin's transplant on the 15th, I'm going to buy that Rosetta Stone software and try to learn a new language that way. I hear it works. It better, because I'll be getting my money back otherwise.

Isaiah in Finnish--yeah you are amazingly Finnish!

I totally understand that pet peeve with pronouncing Finnish words correctly. I have noticed that now that Nokia is a common household item that a lot of people actually pronounce it correctly.
Good luck reading the B of M in Finnish. Not easy. I read my B of M in Finnish when I get tired of reading it in English.

Your daughter's list of requirements is so simple, yet smart. She's got the basics down.
I haven't looked at my German BoM in years. It's all I used even after having lived here for a few years. It was more comfortable that way. Then I realized I better switch to English because whenever I was called on to read in Sunday School or RS I had to decline :) So I reluctantly switched. Thanks for the reminder. I'll find my old German one today and take a look.

We TiVo American Idol and watch it together after the little ones are in bed, too.

And I love the list that your DD5 made : ) !! How fun that you have it preserved now for when she is older!

this is sooo cute what your daughter said.

adorable RANdom thoughts post. i made random a finnish word! he he