ABBA. Not the Election

Thought I'd say that upfront. Yes, go vote. Yes, I already did. (I got to last week in early voting. Duty done.)

With that out of the way, I thought I'd post something a bit more fun.

Shortly after high school graduation, I was invited to what was called a "Better Sounds" party. I had a very . . . interesting . . . group of friends at the time.

The focus of this particular party was the Mamas and the Papas . . . and ABBA. (Light bulbs going off in anyone's heads about now?)

We were encouraged to show up in 60s clothing. At the risk of Sam killing me, I'll post this: 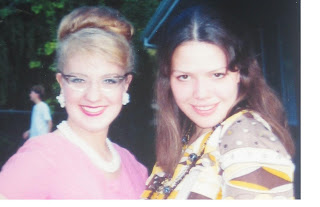 Weren't we adorable? I'm wearing clothes Mom actually wore in the 60s. She even gave me the beehive. Scary glasses, no? (I just did the math on how many years it's been since that picture was taken. Holy freak, it was almost half my life ago. I'm not old . . . I'm not old . . .)

Will, our host, gave us an education on both musical groups, and then we listened to their music while having food and fun and I don't remember what else.

And thus began my love of ABBA. From that point on, whenever we cruised around at night in Sam's white convertible Mustang (oh, the stories I could tell about that!), nine times out of ten ABBA Gold was playing, and we girls belted out the tunes right along with them.

A few years after we got married, my husband and I were wandering through a music store and came across a book of piano music for ABBA Gold. Even though I hadn't touched a piano in years and couldn't play all that well, we bought it anyway. It would be fun to have around.

That piano book gathered dust until this past June, when my son's piano teacher asked for me to send some "fun" music for him to play over the summer. Because 1) he's getting darn good on the piano and 2) I sort of forgot to go to the music store before his next lesson hit, I sent along the ABBA Gold book.

Ever since, he's been working his way through and loves it. He's almost done with it now. He practices before school, and it's been a ball to have "Waterloo," "Gimme" and all the other greats reverberating through the house in the early morning. (Right now it's "Does Your Mother Know.")

He insists I keep my ABBA Gold CD in the car so he can listen to whatever song he's working on as I drive him to school each morning. And as he listens, he air plays on his lap, head bobbing to the rhythm.

I've carried the ABBA legacy on to the next generation. Will would be so proud.

But you do look adorable.

I had never even heard of abba until the Mamma Mia movie came out, which I still haven't seen.

You better believe I've got a copy of ABBA gold in my collection as well. Didn't discover them till I was 14 but have love love loved them ever since.

Where in the world did you dig up that picture--good grief! Yeah, I agree that that party was influential to say the least--ABBA came with me through my trip to Great Britain, through all my grading sessions as a teacher and still comes on some of my runs with me. How fun to have it playing in the house and that you don't have to do it!

You DO look smashing!

Did you know ABBA recorded a little song I wrote?

Did you attend high school in Orem?

I attended high school in Utah County, but not Orem.

I think you look so cute in that picture!

My parents bought ABBA Gold when I was 13 and I played that CD to death. I still love it. It's good 'get the house clean' music

I just read where you went...I went to Mtn.View-probably when you were still in elementary school.

Yeah...um, I wrote about my songwriting abilities here.
To be so talented at such a tender age...

You rock! I LOVE ABBA... and have done my civic duty of passing on ABBA love to my children (oh and I voted too)

ABBA Gold is one of our car's soundtracks. I need to get that piano album for my boys!

My 13 and 12 year old daughter's fell in love with Mamma Mia this summer and we now own the soundtrack.

I had almost forgotten about that party! Thanks for the reminder? I think. What fun days those were, huh? Yes, ABBA Gold is still a must listen on my i-pod and at our house. Last Christmas my sweetie replaced my old, worn out copy with a new one! Yeah!

And, thanks for the tip on the piano book. I think I'll have to get it for my son too. I'm a little tired of listening to him play Star Trek music!

You haven't aged a bit! I never did piano, but I have two kids that not only play, but LOVE to play. Maybe I'll get them the ABBA piano music--that would be awesome. They are both doing songs from the nutcracker right now and I love waking up to Dance of the Sugar Plum Fairy.

I was 10 when ABBA won the Eurovision song contest in 1973 with "Waterloo". I remember it like it was yesterday. That's when my love for ABBA songs started.
During all of our road trips, ABBA songs are played many, many times in the car.

Mary, never even heard if ABBA?? That is so wrong. I have never had a mixed tape or home burned CD that did not include Dancing Queen.

And you look exactly the same, you're so not old.

Holy smokes, look at all the ABBA love. I feel out of place because I only like ABBA. So out of place it's taken me a while to even decide it was okay to leave a comment despite my non-ABBA devotion.

I can't wait to get my kid into piano lessons. I have a sneaking suspicious we'll be treated to the musical stylings of AC/DC all day long, though.

This picture was taken right after high school? I thought it was recent -- you look just as gorgeous today as you did then, you lovely!

I love the picture of you! What a fun party idea...I think it would be even fun now, after we're double the age, eh?

My girls have really been into ABBA since I bought the Mamma Mia soundtrack. It's fun to hear them singing the tunes.

ABBA is a fav of my neighbor. You guys look so cool and great for sure.