Thanksgiving with the Apes 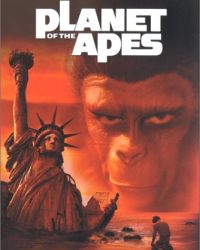 Since hubby's family generally went up to Idaho to visit both sets of grandparents for Thanksgiving, and since Christmas tended to be a bigger deal for my family, that that's how we split up the two holidays the year we got married.

November, 1994: The day before Thanksgiving, we leave our little apartment (complete with puke green appliances, aqua sculpted carpet in the living room and rust-orange shag in the bedroom) and headed for Shelley, Idaho.

We spend the night at Grandma Lyon's house with the rest of my hubby's family. I wake up bright and early Thursday morning, determined to have a good Thanksgiving with my new in-laws and to not miss my own family too much.

Grandma has cable. In our little apartment back in Provo, we have rabbit ears letting us view a total of one channel (we watched a lot of Star Trek: The Next Generation that year), and the rest of the family is pretty stoked about the cable too, so the TV is on a lot.

We end up watching Charlton Heston and Roddy McDowall in Planet of the Apes. Odd show, but I'm always up for a classic, so I hunker down to watch.

When the movie ends, the next one in the series, Beneath the Planet of the Apes, comes on. Turns out the station is running an Apes movie marathon. (There are something like NINE of them . . . bet you didn't know that.)

Everyone's in the front room watching the movies. And I'm wondering, At what point will someone start with the Thanksgiving feast? I wait for a cue, like my mother-in-law going into the kitchen, whereon I'd follow and help her with the meal. But no one's been in the kitchen since breakfast. And I'm not smelling a turkey.

Hmm, I think. Maybe they eat the feast later in day than I'm used to?

The third (or maybe the fourth) movie comes on. I imagine my family eating their Thanksgiving meal several hours to the south of me. Still no turkey in the oven, no potatoes getting peeled. No stuffing or gravy or anything like that. Nothing.

Confused, I finally lean in to my new husband and ask the burning question. "Shouldn't we be getting the Thanksgiving meal ready? It's getting kinda late."

"Oh, no. Not today," he says, as if it's the most natural thing in the world. He returns to the movie. My mind is racing. Are my days off? Is it not Thursday? I determine that no, it is Thursday.

I lean back in. "But it's Thanksgiving."

"The Lyon Thanksgiving is on Friday," he says then returns to Roddy in his ape costume as if he'd just said something totally normal, while my brain was swirling. Um . . . what?

I probe further to get a full explanation.

That year the Jensens were spending the holiday in Boise with one of their other daughters. But since the Lyon meal is always on Friday, they kept it there. That way all the other Lyon cousins wouldn't have to be told to come earlier. It was just easier to keep up the tradition of holding Thanksgiving . . . not on Thanksgiving.

Everyone saw this as normal. No one saw any reason to explain this to the new daughter-in-law.

At the time, I sat there thinking, "Wait. You mean I could have been with my family today and come up here for your family's meal tomorrow too?!"

I felt like the only ape in the room, the one person not getting that it didn't matter when you ate the pumpkin pie as long as you ate it. To me, it did matter. It was either Thanksgiving or it wasn't. Celebrating on a different day would be like ringing in the New Year on January second. It didn't really count.

Years later, I get it: the point isn't so much the meal or the day as much as it is gathering as a family, feeling thanks, and all that comes with it.

So it's all rather funny to me now to remember how I sat there staring at hairy apes talking to one another, confused for hours on end and trying to figure out why there was no turkey in the oven.

To this day, no one in the Lyon family understands why I thought this was even little bit odd.

And to this day, I can't see or hear anything about Planet of the Apes without a chuckle.
at November 17, 2008

My mom always gets out the crystal and the china, and everyone dresses nice. But my first Thanksgiving with the inlaws included soda pop cans on the table and the tv blaring the ongoing football game. Different strokes for different folks, I guess :)

OH. I completely abhore the old planet of the apes. I even did a post about it on my blog... I actually did know there were 9 of them. My Dad used to make us watch them ALL!


Getting married and merging family traditions is tricky!

I would have been very bitter.

Oh, dear. I'm afraid I would have been very much less polite. I have relatives in Shelley, BTW--do you know of any Kiholms? There are't too many in the U.S. so if you know any, that's them. (Oh, and they are all also old--I think the married daughter is Durban maybe)

Man! I would have had a hard time being very Thankful on that Thanksgiving. So weird.

And I bet I DID know about all those Plantet of the Apes movies! And, unlike Kristina, we quite like the new one.

You're right...I had no idea there was so many of those movies!

I find it amusing that the tradition was so obvious and normal to your husband that he didn't even bother to tell you, because everyone knows already. :)

Wow, that's funny. I could just picture you going through their pantry pretending to look for the trash can but in reality scouring it for a can of cranberries...

Ha, the infamous in laws--set to destroy our holiday dreams! I had a similar experience but there was food, it just showed up one dish at a time over a 10 hour period of time. Ridiculous.

OMG!!! Yeah, that probably would've been a fight back when we were newly weds. I would've been sooo frustrated to not have spent the day with my family when I could've done both. You handled it like a champ!
Here's what I don't get:
Why on earth were they watching movie, and Planet of the Apes, no less, instead of watching football?
I mean, Thanksgiving day is one of the biggest football days of the year. It's almost no Thanksgiving without it!!

Oh, I love this story! First holidays with in-laws are always interesting, but it's more fun when it's so unexpected/different.
:)

Hahaha! I can't believe no one told you that!

Hi. You seem to stalk a few of the same blogs that I do, so I thought I'd check you out. I'm embarrassed to admit that although I've been a Mormon my whole life, I've never really been up on the Mormon media scene. So I had no idea I should even recognize your name. Sorry about that.

Hilarious story. I'd not have been so nice. Unless I'd been given a heads up. I don't really care about the day so much myself, but I'd be quite annoyed if I expected something that was never planned to be.

Mina, There's no reason you should recognize my name! It's not like I'm an Osmond or something. :D

The Mormon media scene is pretty small. Thanks for dropping by!