I've known Rachelle so long that I don't remember the exact moment I met her, but it was probably at one of the first LDStorymakers conferences. I've always been impressed with her determination to work (versus the writers who daydream but aren't willing to invest the blood, sweat and tears) and to learn (too many people refuse to set aside the ego, thinking they know all).
Her first novel, Wrong Number, is now available. I look forward to reading it, but I must admit that when I heard what it was about, I had to take a step back. Rachelle is such a sweet, innocent thing . . . and her book is about murder? Who knew she had this side? (LOVE THAT!)

Here's what Wrong Number is about:
When Aubree Stewart answers her cell phone on the way to work one day, she isn’t prepared for her life to change. Someone dialed a wrong number, a simple mistake. But the call changes everything when Aubree overhears information about the murder of a government official. Now she must run for her life as the caller tries to eliminate her.
Aubree is placed in the witness protection program, but when the FBI’s protection fails, she heads out on her own. She soon realizes she’ll never stop running until she can solve the mystery behind the wrong number. Unable to trust anyone but herself, she’s cautious about accepting the help of a Park Ranger named Wyatt Erickson. As she struggles to keep herself hidden from the enemy, she finds it harder to protect her heart. 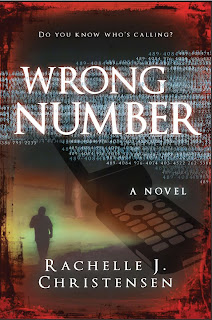 I got to ask her some questions about the book and her writing:
AL: How long have you been writing and how did you get started? (When did the bug bite you?)
Rachelle: I've been writing for as long as I can remember. When I was young, I loved writing poetry and short stories. After I graduated from college, I began to focus more on writing novels.
AL: Where did the idea for Wrong Number come from?
Rachelle: I wanted to enter a chapter into the first chapter contest at LDStorymakers in 2007. I came up with the first chapter of Wrong Number, it won second place, and then I went on to write the rest of the novel.
AL: What research did you have to do for the book? What was the most interesting thing you learned?
Rachelle: I had to do a lot of research. It was fun! I researched different routes through the US so I could decide where I wanted Aubree to go. One of the really interesting things I learned is that California has its own witness protection program under the CBI, California Bureau of Investigation. Some other states have similar programs and it was intriguing to study into how all of the different programs work. I also was amazed at how much schooling a Park Ranger has to go through according to the program they want to work in--check it out HERE.
AL: What is your writing style--are you an outliner or a by-the-seat-of-your-pantser? Or somewhere in between?
Rachelle: I guess you could say somewhere in between, but now leaning more towards outlining. I did have a very rough outline for Wrong Number that I worked from and I talked through a lot of ideas with my brother and his wife. They helped me to come up with a believable motive for murdering more than one person. I’m actually trying to do better with outlining and I think it helps. My outlines aren’t set in stone, more jumping off points for how I want the story to flow. I like to have a general idea of the beginning, middle, and end, but my characters usually end up writing scenes in interesting directions.
AL: That's very much how I work! What is your typical writing schedule like? (I know . . . you're a mom, so *SNORT*!)
Rachelle: Ha, ha, ha, a schedule! :) I have 3 young children so usually my writing time comes at night when they go to bed. Once in a while I can squeeze in a few paragraphs here and there during the day. I just try my best to have goals that I'm working towards and not get discouraged when the diaper count is higher than my word count for the day.
AL: Great way to put it. :) What is one big thing you've learned through the process of publishing your first novel?
Rachelle: There's a lot of work when it comes to promotion. There is so much you can do, that sometimes I feel overwhelmed. I feel that I have to do my part as a first-time author to make my mark on the world, but I'm also trying to balance these demands with the rest of my life. I'm enjoying the challenge and hoping to get Wrong Number into as many hands as possible.
AL: What's been the biggest surprise about the publishing process?
Rachelle: How fast or slow it can move according to demand/desire.
AL: Which authors are your biggest literary influences in the national market?
Rachelle: That is such a hard question for me because I'm reading all kinds of different genres and authors all the time. An easy way out is to have you check out my Goodreads list of favorites and repeat-offenders to see more all time favorites. But I will say that I like Mary Stewart, Agatha Christie, Mitch Albom, Nicholas Sparks, Jessica Day George, and Shannon Hale.
AL: In the LDS market?
Rachelle: For mystery/suspense, definitely Clair Poulsen
AL: Do you have any advice for aspiring authors?
Rachelle: If you’re serious about writing, attend writers conferences and classes, join a great critique group, read novels in your genre of interest, and write, write, write! Also, learn how to take criticism and know when to apply it to your writing and when to chuck it out the window.
AL: GREAT advice. I heartily agree!
Don't forget to enter Rachelle's blog giveaway HERE. You have just a few more days!
FINAL NOTE: Rebecca Irvine is doing a study about LDS readers. She needs a large enough sample to get accurate results. Her short survey and takes just a minute or two.
Click here to take survey

That book sounds right up my alley. I love suspense.

Great interview. It was fun to learn more about Rachelle, and her book sounds awesome.

Fun! Interviews like this always give me hope. And I needed some today.

Great interview! I especially loved the joke about diaper count vs. wordcount. ;) Ah, the joys of motherhood and writing. =]

Thank you so much, Annette, and everyone for letting me tell you a little about my writing life. :) This was fun!

Love the interview! How exciting that it all started because of a contest she won. Can't wait to read this one. I'm a sucker for suspense.

I like her bit about not getting discouraged when the diaper count is higher than her word count!! :)