I found an online article today about Agatha Christie. It was fascinating to learn how totally disorganized and chaotic her writing method was and how often, even she didn't know who the murderer was at first.
My favorite part is near the end and is something that could be put into neon lights for all writers, referring to how some unpublished short stories didn't really sound like her because she hadn't had time to rework them before her death:
She understood that in order to sound like yourself, you have to get up every day and get it all down—the trunk in the hallway, the revolving bookcase on the landing, the old children's books in the library—and then, crucially, you have to edit it as if you are someone else, working through every possibility, before finally settling on the story and telling it as if it had been that way all along.
(Read the full article in Slate.)
And now for something totally random. You may recall how my youngest (currently seven AND A HALF . . . you're not all0wed to forget the half) has long been fascinated by how the human body and other things work.
There was THIS POST about snails and how they poop. THIS video about a brain bank (and sliced pieces of brain studied by scientists) is one of her favorite things to watch online. Santa totally scored points when she got The Human Body DVD from National Geographic for Christmas. Thanks to that DVD, she knows all about how babies' cartilage turns into bones. (How many first graders can even SAY "cartilage," let alone know what it means?!) She loves watching her siblings gross-out when you see the stomach churning food.
You also probably recall that we've been doing photo shoots for my upcoming cookbook, Chocolate Never Faileth! (These two topics are connected, I promise. Read on.)
Part of a shoot featured some non-edible recipes, one of which was chocolate play dough.
After the shoot, my daughter re-discovered play dough and had a party with it. She was SO PROUD of her creations. At first she made animals and fun shapes. But she was most proud of two particular gems:
A treadmill: 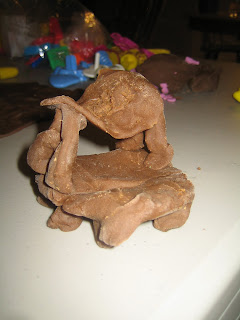 Note the stands on the bottom that support the treadmill and the complex control panel.
Then, in typical form, my anatomy-fascinated child made this: 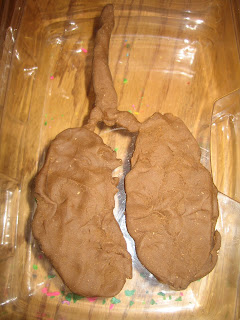 No, my kids ALWAYS make body organs while playing with playdough. :) That is so cute and funny and weird. :)

We currently have a tub of pillbugs on the kitchen table. So far they have not died!

Yummy enough to eat!!
Body organs?
LOL. How funny. You might have a budding doctor on your hands.

Your kids are very unique. In a good way!

I had to use play dough in my college class to form a part of the throat. I wish we could have used the chocolate play dough. It looks delish (especially that treadmill!)

I have been on a major Agatha Christie kick, and am so impressed with her as a writer because she is so non=formulaic.

And, I'm pretty sure your daughter is going to be a doctor or something. Love the chocolate lungs.

I really and sincerely hope my girls turn out half so cool as yours. Love it!

And now I want to read "Ten Little Indians" again...while coughing. But there's no getting me on the treadmill - even one made of chocolate.

Methinks you have a future doctor on your hands! ;)

I love that about Agatha Christie. Nathan Bradsford posted a funny "conversation" between a writer and another person only instead of saying writer, it was substituted with "reviser".

LUNGS. That is the best thing ever.

So like, do not tell your daughter this, but the first thing I saw on that first picture (before I read the title) was two turtles being lovey.

It's probably because I just came from reading cake wrecks. Now my mind is in the gutter. :)

I'm glad to learn that about Agatha Christie. I'm hoping that I can let some more misconceptions about writers go after next week's conference!