It's been a busy few weeks around here between me doing proofing (three times) and getting constant changes and tweaks to my computer guy (the husband).
Oh, and then there was getting two covers made.
One was a new one for Lost Without You. It's in the header and over in the side bar, but for your viewing pleasure, here it is again: 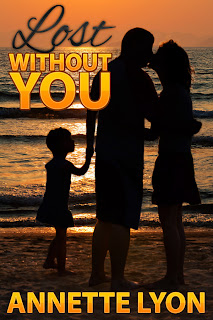 (If you've read it: doesn't the new one reflect the story so much better? I know!)
But the biggest news right now is what's behind all the proofing and coding and the second cover.
All of that was for a brand new e-book.
I got the idea for the story during my senior year of high school.
(Here's where I wax nostalgic.)
I was part of a program called the Senior Honors Seminar. About a dozen seniors were picked for it through an application process. It was essentially a way cool book club run by the principal and one of the English teachers. They gave us books to read, and about once a month, they excused us from class, fed us donuts or pizza, and we talked books and ideas and concepts and had a ball.
The last meeting before graduation was of particular note, when one of the more eccentric members, a student known for his intellect more than his grades and good behavior, showed up high on drugs. (That freaked out several of us young, naive high schoolers.) Fortunately, most of the meetings were interesting for the discussions.
One month, instead of reading a book, we arrived not knowing what to expect. They divided us up. A girl I'd known for years, Steffani, was my partner. Each pair got a painting to look at. We had to come up with a story based on the painting. Totally cool exercise.
Steff and I got "The Timpanogos Storyteller" by James Christensen. In the four or five minutes they gave us, we came up with an adventure based on two characters sitting in the foreground, a boy and a girl. Clutched beneath the girl's arm is a golden object that looks like a dragon. (She's got bluish hair and he's wearing a dark green tunic. Can you see them?) 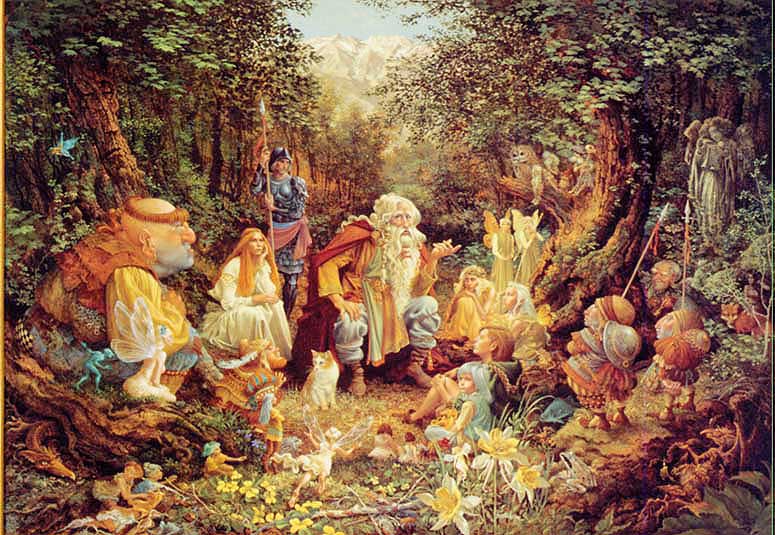 (Image from Inthepagesofabook.blogspot.com)
We said that these two were siblings. Their father was a prisoner of war, and they had to go rescue him with this magical goblet (that's what the gold dragon thing was, we decided), and that along they way, they find this group of people and creatures in the wood (including a wizard who tells stories, per the painting). This eclectic group would help them find the prison and free their father.
We didn't have time to come up with more details than a skeleton, but I loved the general idea. I went home and jotted it down: a single paragraph in a notebook. That scribbled idea stayed in there for years, but eventually I opened up that notebook, read the idea again, still liked the idea, and began writing the story.
In the end, lots and lots of things changed, and I fleshed out all the stuff that Steff and I didn't come up with in four minutes. The siblings ended up closer in age than in the painting (they're 14 and 12), and the sister doesn't have blue hair. I gave them a wounded knight as a traveling companion. A scene in the book that's inspired by the painting does show up (as does a bunch of other fun stuff; see the blurb below).
I played with the story off and on for years. I took it to my critique group. At one point I had some nibbles submitting nationally, but when I decided to pursue the LDS market in earnest, I let it gather dust. Later, I played with (and polished) the manuscript yet again.
When Kirk at Covenant, who was my editor at the time, expressed interest in the fantasy, I sent it to him. He loved it, but turns out that in spite of his enthusiasm, Covenant wasn't doing youth fantasy at that point, so it was a no-go.
I'll go into more detail next week as to why I decided to put it onto the Kindle instead of wooing an agent with it, but for now, I'll say that after all these years, it's out there for kids and grown-ups alike to read, and that's just cool.
Here's the cover and the blurb: 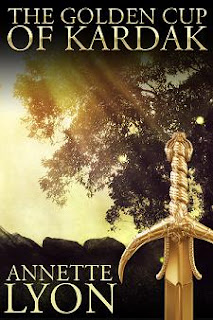 Ever since their father went to fight in Midian’s War, fourteen-year old Torin and twelve-year-old Merinne have been forced to fend for themselves, hoping one day their family will be reunited. But when a short woman with odd clothing finds Torin in the wood and tells him their father is a prisoner scheduled to be executed in fourteen days, his hopes for ever being a family again are dashed. Then a tiny green dragon shows up at their cottage, wounded and near death but lugging a legendary golden goblet behind him. He brings word of a prophecy that the siblings are to not only rescue their father but save the kingdom. With the help of Markanus, a wounded solider, they set out on a quest to free their father. In their search for the secret prison, the small group faces near-capture by the ruthless enemy army, a maze of terrifying underground caverns, kidnapping by giant hairy creatures that will kill them to keep the goblet, capture by outlaws, and attacks by snake-tongued flying beasts with razor-sharp talons. To succeed they must find help to deliver the goblet to their father and somehow muster the courage it will take to stay alive.

Email ThisBlogThis!Share to TwitterShare to FacebookShare to Pinterest
Labels: Golden Cup of Kardak, Kindle, Lost without You, publishing, writing life

Sounds like a pretty cool story. I will definitely check it out.

And I like the cover to your new book, though I haven't seen the other one to compare.

Kudos to you on all the good things that are happening!

Mmm! I like your new cover much better than the old one.

To clarify for other readers: The book is $2.99. For some odd reason, Lisa can't get for that, but she'd in Poland. We think the exchange rates are affecting the price over there.

I did seniors honor seminar. It's really cool that they did that.
Story sounds really interesting!