I spent most of Thursday at the annual LDS Booksellers Association convention. It was my second time there, and I loved every minute of it . . . except for when I was walking, because I had the stupidity to wear some shoes that, while incredibly cute (thanks for letting me babysit them, Mom!) pinched something fierce. I hobbled my way back to the car at day's end.

On the up side, this year I remembered to bring a camera. On the down side, I didn't remember to take it out very often, so I don't have pictures of things I really should have: hanging out with Michele Holmes and Stephanie Fowers at the Covenant breakfast, spending time with Josi Kilpack and Julie Wright, and chatting it up with the Covenant editors, especially my very own editor, the illustrious Angela (who rocks beyond measure and recently found my blog. Hi, dear!). 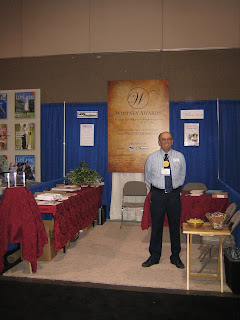 So we'll make do with the few photographs I did get.

First is a picture of the Whitney Awards booth, where I spent the time between the Covenant breakfast and my signing, helping to spread the word about the Whitney program and getting retailers and other industry professionals to join the voting academy. (The gent you see in the picture is BJ Rowley, one of the members of the Whitney Committee.) An example of the award is off to the left, but being as the award itself has no color and is transparent, it's hard to make out. It looks (quite fittingly) like an open book. 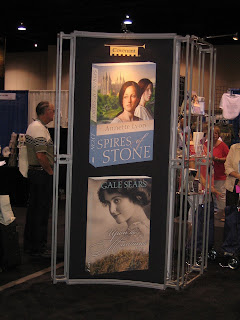 Next is the giant banner with my book cover on it. Last year when I saw At the Journey's End on such a banner, it was so dang cool to see it blown up so big that I vowed to be sure to bring a camera next time. So I did. :)

Lastly, there's a picture of me at the signing table with a stack of ARC's of Spires of Stone that I got to touch, hold, and flip through for the first time. On the right is a basket with white chocolate temples I made to give away with the books because I'm a total idiot and make more work for myself than necessary (hey, but I have fun doing it)! 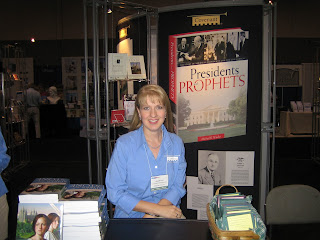 This was the day that the reality struck home. Spires will be on shelves in a couple of weeks now! The road getting it to press felt long, and at the time the release felt a world away, so the fact that it's staring me in the face is wild. It crept up on me fast. I'm suddenly realizing all the promotional things I wanted to do and now need to get going on because it's TIME.

Funny thing is that I've been telling people that my fifth book is coming out, and then I have to stop myself and count to double-check. Yes, that's right. Five. A whole hand! The journey to this point has been amazing, and I'm so grateful to be where I am, writing the stories I do and having the chance to share them with readers. I can't tell you how gratifying it was to have book store owners get their copy yesterday and talk about my books in such glowing terms: asking how many more are coming, when the NEXT one will be done ("Hurry!" they said, even though one is just now coming out. I am trying to hurry. I am!) Several people had to be turned away from getting a copy after the 50 brought for the signing were gone.

One moment from the day stands out for me. Backing up: A creative writing professor I had in college warned the class that the chances of any of us getting published were pretty slim. He also said that most of us weren't good enough and really shouldn't be writing. He was just being realistic, trying to not inflate our hopes, I know, but I decided right then and there that I would prove him wrong.

Yesterday as I walked from one side of the hall to the other, I saw him. He was there because his own latest book just came out. He recognized me, and we had a brief exchange. I have no idea if he remembers what he told the class over a dozen years ago.

But he does know that at least one of his students defied the odds.

And that fact makes the success just a little sweeter.
at August 17, 2007

Camera--what a brilliant idea! congrats on 'selling out' don't you wish every signing was like that? It was great to see you--and the shoes were very very cute :-)

Great pictures! How cool that you saw that creative writing professor!

What a dream, Annette! But we all know that behind every dream come true is a lot of hard work! Congratulations! You've earned your success, and I wish you much more.

Congrats several times over! I am sure you were more than thrilled when you sold out of your books :) !! Hopefully my library system will pick up your book. (I'd purchase it myself, but with the DH in grad school the library is my only way to go!)

That's so cool. What a wonderful experience to sell out of your books and have people saying such great things about your writing.

And, cute shoes are well worth a bit of pain! I looooove shoes.

Congratulations on all of your success.

Lest everything think I was ridiculously popular, let me clarify how the LDSBA book signing thing goes at least w/ my publisher:

They bring 50 copies of the book. 30 minutes before the signing, they hand out 50 tickets that entitle the bearer of each one to a FREE copy. So during your signing, the publisher is giving away 50 promotional copies of your book to retailers to pique interest in your book and (you hope) increase sales down the road.

Hence, I "sold out" in quote marks only. :) It's the one and only time I'll have a line at a signing!

LDSBA was a blast. It really is one of my most favorite things to do every year. I was privileged to work with Annette the day she did her signing.

Annette, I'm so happy you proved your professor wrong. I have a couple I'd like to visit as well.

Don't downplay your sell-out. I do know of a situation like yours, where only about 10% of the people who got tickets bothered to show up for the free book.

And hey, it was great to finally meet you in person for a few minutes. I'm just ticked that my allergies were so bad, I could hardly hear what people were saying to me.

Great pictures! I wish I could have gone. And that is so cool that you met your old professor. That's definitely a moment to savor.

Annette, you are invited to join the LDS Blog Webring I set up. You may do by going to my blogspot, locating the webring on the righthand side of the page and clicking on Join. Hope to see you come aboard.

Be sure to insert the code on your blogspot right after signing up or it halts the progression of the webring as people click on next.

Oh, GOOD for YOU. How fun! Now I'm dying to know who that professor was....

Can't wait to see you Thursday!!!

Super photos, Annette. Hope you got a chance to see the one on my blog that BJ took of you. You are very photogenic. If this book is anything like the others, I'm sure it will be another best seller. Can't wait for it to get in the stores. Yay for you!