WNW: The Power of a Hyphen

I adore how these little marks allow writers to "conduct" the music that is their sentences and paragraphs. If a writer knows how to use punctuation well, the meaning is clear, rhythms flow, and everyone lives happily ever after.

Fine. That's a slight exaggeration. But the basic concept is sound.

One of my favorite punctuation situations involves hyphenated compound adjectives, because leaving off a hyphen with these little buggers is a classic way of inadvertently creating writer bloopers.

What?! Hyphenated compound adjectives sound as interesting at burnt toast?

Try this on for size:

Not long ago, there was an episode of Monk where sportscaster Bob Costas guest-starred. Bob expressed his gratitude for a time earlier when Monk had saved his life from a situation involving a demented cat salesman.

Bob tells the story to Captain Stottlemeyer of the San Fransisco Police. Since Monk is known for catching murderers and solving apparently unsolvable mysteries, the good Captain and the audience are all picturing the demented cat salesman as some shady dude who sells cats on the side then takes on the role of psycho murderer in his down time.

Bob clarifies: The cat was demented. It tried to kill Bob, not the salesman.

In which case, he wasn't talking about a demented cat salesman.

He was talking about a demented-cat salesman.

Now the image shifts: Bob was nearly killed by something like this: 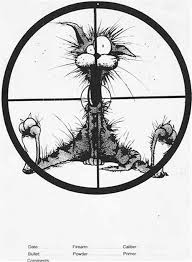 Amazing what a little hyphen can do, don't ya think?

Very interesting! I have to admit that I am not very good at knowing when to use a hyphen and when not to.

That is interesting. I'm horrible at punctuation. I just do it by feel, without really paying attention to rules...I look forward to learning how to use colons and semi-colons and em dashes properly! :)

Is it a bad sign that I had to read this 3 times to realize what you meant? A man the sells demented cats, right? But it was the cat that tried to kill Bob, not the salesman? My head hurts.

(I love the Monk reference!)

I'm an over-hyphenator but I'm working on it. I just like my words to feel connected, I guess.

I love hyphens, and all other kinds of puncuation. I-probably-use-them-way-too-much.

I love hyphens. I think I over-use them.

I over use hyphens. I put them in spots they shouldn't be. But I love the look of them Annette. I am laughing as I am typing this. I will probably have a hyphen on my grave site.

I love hyphens. I use them constantly, mostly because I think they best represent how my mind flows from one idea to another. (In stutters.)

I love hyphens, too. I don't think I always use them correctly, but I love them. And commas. Oh, how I love commas!! I'm always adding them to whatever my husband writes because he doesn't believe in punctuation, or spellcheck. But it makes the editor in me giddy to have so much work to do!!

When I wrote my humor column it would drive me crazy when an editor would change my punctuation and cause a sentence that I intended to be sarcastic, instead end up making me look like I was completely stupid.

And I'm still trying to figure out the difference between a demented-cat salesman and a demented cat-salesman.

Aren't they both salesmen that sell cats?

I used to know - and actually use- rules of punctuation.
Blogging has been a freeing thing for me. I pretty much make up my own rules now.

But I do appreciate knowing how it's SUPPOSED to work.

For Josi and Anna--

With the hyphen, the CATS he sells are demented.

That was very funny. I think I know how to use hyphens!

One of my fav posts Annette.
I love it

Oh, yay! Now I understand the hyphen thing - for a few minutes, at least :-) Thanks, Annette.

I love hyphens, but they're a bugger to use in HTML.

Good point. Not sure I could use it properly but I can see that you did. Love your picture!