"We have the evaluations back on your murder mystery," the managing editor told me over the phone.

"And?" I gulped and held my breath.

"And the readers feel it's a little dark."

Ya think? The story was about a serial killer. That sort of ensures that the story will be dark.

Turns out that wasn't the primary issue. House on the Hill had been out just a couple of months by this point. "And here's the thing," she said. "Your historical is doing really well."

I hadn't known that.

Another thing with being published that people don't usually know: you're often in the dark about sales. I get a statement twice a year, in February and in August. Those are the only times I ever see sales numbers. HOTH came out the first part of February, so I'd get my first statement on it in August. The call was early April. I was months out from having any clue how well my book was selling.

This time I had gotten one clue that it was doing better than my other two books had, but it didn't come from Covenant directly. A newspaper reporter from Logan called for an interview, and one of her questions was how I felt about the book selling out of its first printing in just a few weeks.

I sat up. It what?! Cool! That was news to me. The reporter had gotten that information from Covenant, but they hadn't told me.

So I knew that much when the managing editor called. I guess selling out of my first printing in less than a month was highly unexpected for them. In a happy way, of course.

When I got my royalty check at the end of the summer, the news was somewhat confirmed.

With book #1 I got that microwave.

With book #2, I bought these adorable stools for my kitchen counter, stools I still love: 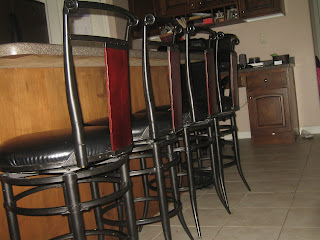 Then with royalties from HOTH, I bought something that looked like this:

So, yeah. In comparison, the royalty check was quite a bit bigger, which mean I sold more, which meant I hit a readership nerve somewhere along the line.

Back to that spring-time conversation, though: "We feel like you're good at the historical thing, and we'd like you to ride the wave." While they didn't outright reject the murder mystery, they said they wanted to "shelve" it indefinitely.

At first I was irked. I'd spent a year on a useless manuscript. But then I saw they had a point. I already had three very different books out. If my next one was totally different from them, my readership would get dizzy.

In a sense, publishing creates an author brand. I can list a bunch of authors, and immediately you know what "brand" they represent:

Right? You know right away what to expect when you pick up any of their books.

Did my readers have any clue what they'd get when they picked up one of mine? Not really. And putting out a murder mystery next would only muddy already-murky waters.

Here I was in the same predicament I'd been in after LWY: I had nothing else ready to submit. If I wanted to have another book published without a 2-year (or more) gap, I'd better hit the keyboard, and do it hard.

(Lesson for aspiring writers: commit to a genre early on!)

In all honesty, I am quite taken aback with how in the dark publishers leave their writers. Is this normal? This would drive me bonkers :) !! Especially if I am getting information from a third source about how my own book is selling?!

But congrats on the big royalty check ... my kids would love it if I brought home something like that :) !!

My publisher is the same way about leaving me in the dark and I hate it. How hard can it be to send an e-mail update with the sales numbers?

Looking forward to the next installment on this series--love it!

No kidding--it's frustrating to not have a clue without asking and hunting down the information yourself. It's pretty widespread for all publishers, as far as I know.

Well, I've committed to my genre. It's been five weeks since Covenant got my resubmission. I wonder how many more will pass before I find out if I'm posting about how to handle success as a first time submitter, or how to handle failure.

I'm learning so much about this. Who knew that you had to commit to one genre? All though it does make sense, I guess.
WOW.

I used to think it would be such a pain to be confined to a genre. At this point, I would welcome it if it meant that I were getting published!

I suggest writing about a completely ridiculous blogger who sometimes cuts her own hair at the root and almost puts an astringent soaked contact into her eye.

I'm loving this series, Annette. It's taught me so much! And I love hearing your story, too...

You should resubmit that suspense novel--they'd probably gobble it up now!

I guess that would be a hard thing to decide --I mean actors/actresses don't like to be "type cast" do authors??? I just think it is awesome that you have this talent --and can make $$$ from it, so I say, write what you feel,,,,,,,,,,

Another great chapter in your writing story!
Sometimes when authors become more established they can branch out though. After all, the only James Patterson books I have read are the Maximum Ride books, which are not his usual...and which I really enjoy.

I've never thought about writers committing themselves to a certain genre, but now that you say it, that makes sense! I just never thought about it before. Thanks for sharing this part of your story with us! I love hearing about your writing journey.

Congrats on the sales first of all. How rewarding that must be to have the 'verification' that people are liking what you're doing. Fabulous.

I need to go back and read the rest of this series.

It was so great to meet you today (even if you were shorter than I was imagining).

Wow! I can totally see your dilemma! But how cool is that to have your book sell out of its first printing with in weeks! That's incredible! I can't wait to read one of your books. I plan to pick one up this week! Glad I met you.

I'm loving this story AND I'm feeling jealous and feeling petty about that since I have had way more dreams come true than so many gifted writers out there. Bummer.