I'd been writing for years and years (buckling down and getting serious for eight years by this point). That meant I'd written lots of manuscripts. What that didn't mean was that they were all good. It also didn't mean I had several just lying around, ready to be submitted.

In fact, one of them in particular is so awful I don't think I'll ever open the file again. I call it one of my "learning experiences." (What NOT to do . . .)

I had a problem, though: if I didn't submit something else very soon, I'd end up with a two-year gap between my first and second books. I was working on something else (more on that in a minute), but I wasn't anywhere near done with it. At the rate I was going, trying to finish it might take a year or more . . . which could mean three or four years between books.

Not a good way to build a readership.

As things stood, I'd spent nearly 3 months on promotion and about that long again adapting to life with another baby. I hadn't done much by the way of writing during those months. I was burning daylight.

I decided to pull out the manuscript that Covenant had requested I revise and resubmit more than a year before, the one I'd sent in right before LWY. It was the book that sparked my lunch with Valerie, and Covenant had shown interest in it, right? So I sat down and revised the puppy . . . yet again.

This time I made changes based on what Valerie had told me about the market, which meant some hefty revisions. For starters, I aged my protagonist by six years (the average Covenant reader isn't going to go for a high school graduate as a protagonist; that's way too young), so Annela now had a dream of going to the States for graduate school instead of college. I had to redo several opening chapters because a 24-year-old isn't going to be living at home, but I needed to get her there temporarily for the rest of the story to work. Stuff like that.

I submitted it and hoped for the best.

Within a few months, the book was accepted for publication (yay!), but of course, I didn't get lucky by landing another release date only 5 months out. Turns out my books would be nearly two years apart anyway: LWY hit shelves July 2002, and this one would come out February 2004.

Our family ended up moving right in the middle of edits. This caused a couple of problems.

First, I'd just gotten my first royalty check, with which I bought a fancy-schmancy microwave. My hubby got an equal amount from the check to buy a guy toy with. (Wait. You thought writers are rich? Hahahahaaa!) I was not about to leave my hard-earned (and did I mention fancy? I mean, it had a setting for melting chocolate!) microwave behind.

We took it with us even though it wouldn't match my new kitchen. But we were installing a little kitchenette downstairs (for future popcorn popping and whatever when kids have friends over to watch movies), so that's where it is now. It still brings me joy: 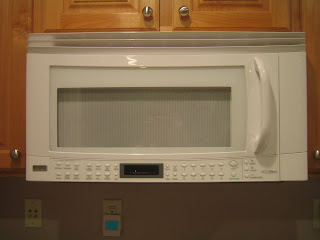 The second issue moving caused was losing access to my computer. I remember being in a panic because I couldn't retrieve a file I needed, and I might miss an important deadline. At one point, in an effort to get me an edit, I ended up having Angela e-mail a file to my dad. It was nuts, but it all worked out.

I got the title and cover after we were somewhat settled in the rental we'd be living in while our house was being built. (For me, memories of where things happened are inextricably linked to the events themselves, so I gotta include that. Stupid rental. I hated that place.)

When I first heard the title, At the Water's Edge, I thought it worked pretty well on a couple of levels. Annela is on the verge of baptism at the opening, so symbolically, she was at the edge of the water. And then a lot of significant things take place on a big stone protrusion (nicknamed "The Elephant Rock") at the beach. So again, the water was meaningful. 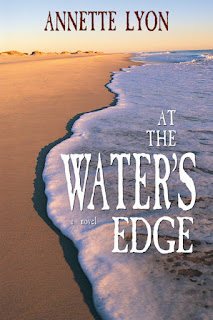 My biggest reason for not liking the cover is that the book takes place in Finland, a land of lush pine forests. The picture on the cover, on the other hand, looks like it could have been snapped in Saudi Arabia.

When my husband and I got to visit Finland last fall, I made a point of visiting the real Elephant Rock, where a lot of the book takes place.

Here is a photo of me with my parents on the Elephant Rock (the angle is such that you can't see the elephant head shape, but it'll give you an idea of the setting): And looking out from the rock to the water: Even though I didn't feel that the cover matched the book, I didn't make a stink over it. First off, I didn't dare; I was still pretty timid. But I also trusted the marketing people, figuring that if it was eye-catching enough to make readers pick up the book, then the cover did the job even if it wasn't accurate. (In the end, I'm still not all that sure the cover did its job, but I digress.)

In the final proof stage, I came across some funky symbols in the text where Finnish letters belonged: every time there should have been an A or O with dots on the top (like Ä), there was some weird symbol instead. I kinda panicked.

My beloved editor, Angela, assured me they'd all be fixed. In my paranoia, I asked her to fax me the affected pages so I could see for myself that they'd been corrected before the book went to press. (She was always great at accommodating my control issues. I was timid on the cover, but not on the text!) And phew. They were all fixed.

This book was the first and only time I've gotten a radio ad for advertising. The commercial was silly and fun. The term "chick lit" was pretty new, and someone in marketing misunderstood what the term meant, figuring that "chick lit" simply meant books women like (akin to "chick flicks"). So the ad refers to ATWE as "chick lit." Which it totally isn't. I didn't care; I got a radio ad!

(To hear the commercial, click on the link at the bottom of this page of my website.)

Right around this time (following the release of LWY and during the revision/submission stage of ATWE), I finally got the guts to start writing a book that had practically been burning a hole into my psyche for some time. It was the one I had only a few chapters of written after LWY came out, so it hadn't been an option for submitting second.

For years, I'd felt drawn to writing a story about the Logan Temple. The very thought of attempting to write something historical scared me off (let's all laugh again . . . I had no idea what the future held!).

But the story simply wouldn't go away; it nagged at me. I'd already read Nolan P. Olsen's book about the Logan temple. Twice. I was drawn to the book originally because there's family history in Logan, including the fact that my parents were married in the Logan Temple, and I chose to be married there as well. I knew that somewhere in Olsen's book was a story I had to tell.

For a long time, I was just too chicken to do it.

Before our move, I attended a city-level writing workshop where Marilyn Brown, a historical novelist, spoke. Her sheer excitement over her research and writing was contagious, and I left with the courage to finally try my hand at a historical novel.

After submitting At the Water's Edge, I had no excuse to avoid the historical anymore. I buckled down to finish this project that was totally different from anything I'd ever tried before, a fact that was both thrilling and absolutely terrifying at the same time.

**Edited to add: I got the rights back to ATWE a few years ago, got a new cover designed, and put it up as an e-book. Here's the new cover, which looks so much better: a woman who looks Scandinavian, with a blue (watery?) background. Love it.** 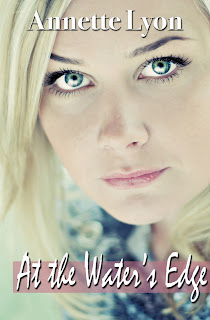 Email ThisBlogThis!Share to TwitterShare to FacebookShare to Pinterest
Labels: At the Water's Edge, conferences, House on the Hill, Lost without You, reader questions, Writing Journey, writing life

I love the microwave story.

And I have never been to the Logan temple. I have actually only been to Logan like once or twice in my life! Boo.

I've never even been to Logan!

This is all so interesting...it seems to me that the temple series is something you were meant to do.

Hey, my mom's best friend and her husband are serving in Finland at the temple right now.

Wow, I love this story. Thanks!

I think the picture you took looking out at the water should be used if your book ever gets reprinted :) !!

I need to get on the move and read your House On the Hill book. After all, my Dad was born in Logan and I believe that is where my grandparents were married!

And I love that you spent your hard earned money on a microwave.

It's quite fascinating how stepping out of your comfort zone was such a springboard for you. I know I've said this half a dozen times already, but I'm loving this series of posts!

I love Logan and the Logan Temple. I'm from there. I love reading about your journey!

How wonderful it must feel to see your name on the cover like that.

I remember where things happen, too, or how old my kids were when they happened.

ATWE is the only one I don't have. Must. Get.

I'm with Scribbit. It must be a wonderful feeling. You worked so hard and for so long. I LOVE to see me a dream come true! If that sentence makes any sense at all...

I love the picture of the real water's edge. Very pretty. And I love the microwave with the chocolate setting.

Loving this story! It's so fascinating. I really wish that I had money to buy some books or that our library had more than just the one, because I'd really like to read some more of your work!

I love reading about your journey Annette! i got your email about everything...I am SOOOO excited!!!

"get an extra copy for the man in your life, because he won't!