With all the research I've done into early Utah temples for my books, I thought it might be fun to share some of the nuggets I've learned, a few lesser-known stories about the temples I've written about (plus the one I'm currently writing about).

So we're beginning a four-part trivia series for the fun of it. I'll pass along a few tidbits about one temple each time, including a trivia question that I'll answer in the next post.

We have to start with the first temple I studied, the one that set the entire project rolling: Logan. When I first began reading up on that temple, it was purely out of my own love for Logan and the building. I was married there, as were my parents, and my father grew up in Logan. Seeing the temple on the hill was a part of visiting my grandparents as a child, and the entire Cache Valley area somehow speaks to me. I have plans to revisit the area in my writing.

But back when I first read about it, I felt driven to write a story centered on the temple. At the time, I wasn't even published, and the idea of venturing into historical waters was terrifying, so I dragged my feet, but slowly made progress on the resulting book, House on the Hill. No one involved had any idea it would become be as successful as it was (it sold out of its first printing in a matter of weeks!) and that I'd end up doing an entire series of books based on temples. I'm loving it. 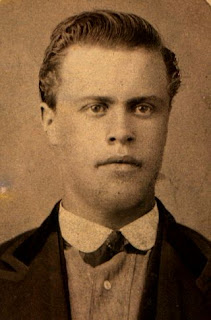 As for the trivia, I won't be repeating much information in the novel (and there is quite a bit IN the book. Read it! :D), except to mention a historical figure who appears in the book. Cache Valley historian Darrin Smith passed along a huge amount of information to me recently, including this photo.

While I left with a boatload of stuff, including a lot of photos, seeing this man's face was a major highlight. I felt as if I were finally meeting an old friend. For those who have read the book, this is a picture of Billie King, one of two men who died in a tragic snow slide connected with the construction of the temple. (The other was Nephi Osterholdt.) To learn more about why I feel so connected to Billie King and his wife, you'll have to read the historical notes in the back of the book.

As for other Logan Temple trivia:

1) One of the first deaths involved with the temple was at the temple hay baler. The reason there was a need for a temple stable and baler, of course, is that they didn't have power machines and cranes like we do today. Animals did a lot of the hauling, lifting, and so on, and there needed to be a place to house the worker animals and feed them. The baler had a big stone that would drop onto the hay and compact it.

One day the stone got stuck for no apparent reason. A young man named John Hincks put his head inside the baler to look up for anything in the stone's way, and right then it released, crushing his head. This is one of the stories that hit me hard, and I really wanted to tell it in the book. The problem is that I couldn't find a natural way to work it into the plot, and I didn't want to plop a real event into the book that had no purpose as far as the story and characters were concerned. So sadly, John Hincks was left out, which is why I wanted to mention him here.

2) A whopping 1516 yards of factory-made carpet were imported for the temple, effectively depleting any further supply. It still wasn't nearly enough. Superintendent Charles O. Card got permission to use homemade carpets and quickly got the Relief Society and Young Ladies Mutual Improvement Association involved in making more.

The carpets were made from torn rags woven into lengths and then sewn together by hand to fit specific room measurements. To prevent the rugs from twisting in the process, they'd tie each end to door knobs to stretch it across the room to keep it straight. The last of the carpet was delivered after the dedication and installed at 8:00 am the same morning that the first ordinances were to begin. The women made 2,144 yards of carpet.

3) In the early years of the temple, they white-washed the exterior with white paint tinged with a little red, making a pale pink. The paint weathered poorly, however, and had to be redone within a few years. By 1905, the paint was mostly gone and the temple looked bad. At that point leaders decided to let the temple's natural stone alone. (Good decision, I think; the walls are so beautiful!)

4) The temple underwent significant remodeling in the early 20th century, finishing the fall of 1917 at a cost of $50,000. Three months later, a fire started inside the temple, destroyed one of the spiral staircases, some offices, decorations, windows, doors, casings, and much more. Initial estimates put the damage at $150,000. The cause of the fire was determined to be faulty wiring.

Firemen were stopped at the door to show their recommends on their way in to fight the blaze, where they found much of the interior destroyed, including some beautiful murals. The temple was renovated and open again within three months, since the damage wasn't as bad as initially believed.


The Logan Temple has so many stories connected with it, including some amazing miracles that I don't feel I can do justice to in a blog.

Now for a tidbit that IS in the book:

On October 1, 1976, the Logan Temple was closed for a massive renovation. Essentially, the interior was gutted, leaving a stone shell, and a new, modern interior was then constructed. In the process of the demolition, something was found inside one of the walls.

The epilogue of House on the Hill gives a possible explanation for
1) What that thing means and
2) How it got there.

And that's all I'm going to say. If you've read it, you know what I'm talking about!

Now for this week's bonus question:

Any guesses? I'll reveal the answer next time and give an explanation, and then we'll launch into the second temple I researched: St. George.
at July 07, 2007

Amazing stories. You must've had such a wonderful experience researching about the temples.

My grandfather was born in Logan, in 1912, and grew up there. We visited there many times and I loved seeing the temple (and I named one of my sons Logan).

I am so thankful for the many sacrifices the early saints made to build and maintain the temples--we're so blessed.

My husband's grandparents and parents lived in Logan. It's so beautiful there. I wanted to name one of my kids Logan too but my husband vetoed that idea because it was a city, not a a proper name. I kept telling him that he got to name all the babies he pushed out of his body and I'd name the ones I pushed out of mine, but that didn't go over.

Anyway, very interesting stuff--although it makes me sad that anybody died building the temple. It seems like they should have had extra guardian angels protecting them--but then I guess if you're going to die, dying while doing God's work is the way to go.

I've found so many people who have a connection to the Logan temple in particular. I don't know why, exactly, but it's pretty amazing.

Janette, I've thought the same thing about people dying during construction. (Address it in the book, for that matter, from one character's standpoint.) One interesting thing is that there are at least as many miraculous moments of people's lives being saved during the construction as there were people dying from accidents. It makes you wonder why some were spared and not others. Their time to go, I suppose, but sad nonetheless.

Josi said...
This comment has been removed by a blog administrator.
4:02 PM

:D Sorry to confuse--The question you can answer is the Bonus question.

I'm purposely not telling more about what was found inside the walls--if you've read it, you know. If you haven't--you'll have to read the book to find out what it is, and I don't want to ruin the surprise. :)

How awesome to discover your site...and to read more about the Logan Temple. My great-great-great grandfather, John Thirkell plays a part in that history. He prophesied that some day the temple would be built on that location...on condition that the people would press on in faith, be diligent...and pay their tithes and offerings...something that they have failed to do in the face of crop failures. I wish I would have know this when I chose which temple to get married in....good luck in your writing...I hope you're surrounded by ministering angels....

John Hinck's story hit you hard, but not as hard as it hit him. :)

Amazed, I remember that story! How neat to be related to him. I absolutely love that the Logan temple is steeped in so much history.

I am so GLAD they stopped painting it! I had no idea. The natural stone is gorgeous.