The answer: B, the roof.

In 1883—before the temple was even completed—a windstorm blew holes into the roof of the Logan temple. And that was just the start. By 1906, the roof had been repaired five times, including once in 1896 when the tin on the roof was blown right off. The roof was replaced in 1909, but still had trouble. In 1917 it had so many holes that the temple presidency requisitioned sixty wash tubs to catch rainwater!

Now for the next temple: St. George.

Note that I’m posting about them in the order I wrote and researched about them, not in the order they were completed. St. George was the first temple dedicated in Utah, and Logan was the second. I’m totally backward.

Like last time, I won’t be discussing historical bits that appear in At the Journey’s End, but (also like last time), below is a photograph of something that is mentioned in the book: the original tower and dome of the St. George temple, much shorter and squatty-looking than Brigham Young wanted it. He didn’t insist the Saints fix it, since they had already sacrificed so much to build the temple. But about a year after his death, lightning struck the tower and they rebuilt it the way he wanted it.

The tower and dome look much more proportional now! 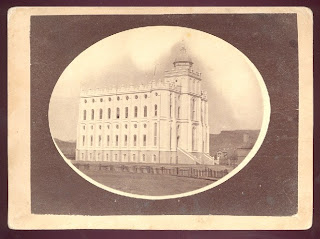 1) This was the only Utah temple Brigham Young dedicated, because he died about three months later. At the dedication, he was so weak that he had to be carried room to room inside the temple.

2) The original architectural drawing for the temple featured a tall spire instead of a tower/dome construction.

3) Getting enough wood to build the temple—in the middle of a desert—proved difficult. It had to be cut and hauled in from Mt. Trumbull in northern Arizona, some 70 or 80 miles away. But first the trees had to be lugged to the sawmill in Antelope Springs, about halfway to St. George. The mill was about two miles away from water, so according to the history of Robert Gardner who was in charge of the lumber needs, "it took one man with a team all the time hauling to supply the Mill to keep up steam, and for domestic purposes."

4) The baptismal font and twelve oxen that supported it were made in a foundry in Salt Lake City and then hauled to St. George via railroad and oxen. The font was transported in several pieces and later bolted together. On the way down, the ox drivers had a difficult time keeping US soldiers (who believed they were carrying cannons) and others from peeking into their load. The drivers had a charge not to show the font or oxen to anyone besides bishops and whoever the bishops deemed could see them. The transportation took place during the same time as the John D. Lee trial, so emotions were high.

5) In 1928, a fire broke out in the annex of the temple in the early morning hours and caused several thousand dollars' worth of damage. The fire began in the furnace room shortly after the morning fire had been lit. Without an organized fire department—and with low water pressure—the fire was difficult to fight. Fortunately, it was put out before hurting the temple proper besides smoke damage, but the annex was burned up completely, leaving nothing but the stone walls standing.

Next time we’re going out of chronological order again, because the temple I wrote about third is Salt Lake City, but it was the fourth one dedicated. It’s also the one that’s freshest in my mind because that’s the book I just finished and is slated for release in two months. (Woohoo!)

I should know this, since my own grandfather was president of this temple in the 1980s. But I'm clueless.

Okay, here's the crazy thing. I just created my blogspot yesterday and I've already been tagged by Rebecca Talley and Tristi Pinkston. Wow! Word sure spreads quickly! So, I'm supposed to answer all these questions - tell me, why am I not in bed yet? and

What were you doing ten years ago: Ten years ago, let's see, that would be 1997 -- I can't remember. I would have been married to my college sweetheart for two years. His little brother, who lived us for the first year of our marriage, had moved on to another brother. Oh wait! I remember. 1997 was the year I was laid off from Novell (which I campaigned very hard for) and I began studying under Paul Gray, one of the best story structurists in Hollywood. That began a year where almost everything I learned in college was chucked out the window and a whole new way of writing screenplays was introduced to me. Whew -- one down and how many to go?

What were you doing one year ago: Geez, what's with the questions and having to remember where I was ten years ago or one year ago. A better question, what was I doing yesterday?

Five snacks you enjoy: home-made chocolate chip cookies, Colorado popcorn, tortilla chips/salsa/guacamole (craved that one with every pregnancy), baby carrots and peanuts. Do I have to stop at five?

Five songs you know all the lyrics to: That would be none. I am the queen of taking first, second and third verses and merging them together for my very own version of every song I know. Although, I can safely say I know "Popcorn Popping," and "I Am a Child of God" and those are the only two I can to knowing completely.

Things you would do if you were a millionaire: Invest half of whatever the IRS doesn't steal with their grubby little hands, pay off my mother's farm and debts and then pay her a monthly stipend, pay off our debts, build our food storage back up and better prepare for any disasters coming down the line. This is one thing I cannot joke about as money is tight in the family right now.

Five bad habits: Eating too much junk food when I know how bad it is for me, not exercising like I used to, procrastinating cleaning my house (I really, really hate to clean but love a spotless house, what a conundrum!) And quickly abandoning work to go play (I really do that, I've had to exercise more control as of late) and last, but certainly not least, I must, WITHOUT QUESTION, kick my Mountain Dew habit. Ugh!

Things you'll never wear again: A swimsuit, bell-bottoms, peasant shirts, really --- anything from the 70's! Man, it was ugly the first time around - I don't know why we're repeating it. Oh, and Rebecca's right, blue eye shadow, but I really miss my big hair!

Five Favorite toys: Uh, uh, uh . . . hmmmm. I have no idea. Does Quiddler count? That's the best game known to mankind for anyone who doesn't know what Quiddler is.

Where will you be in ten years? Owner of a publishing house, movie studio and record label. Debt free and still living frugally. I will more books published (other than the five I have right now) and movies produced on the screen and in everyone's DVD library. Nah, I don't want much.

That's it for me tonight -- tomorrow I'll tell you about the book signing I did tonight and the benefit I'm throwing for my mother tomorrow evening -- or would that be today -- well, that would July 14, 2007 (oh yeah, Saturday evening). More details at www.candacesalima.com/benefit.htm. I know, I know, shameless plug. Yes, I hang my head in abject shame, but I'm still doing it!

Superb photographs of these Temples, Annette. You're quite the Temple expert after writing so many novels involving these beautiful buildings.