It's so close, I can almost taste it! In just over a month, Spires of Stone will be officially released. 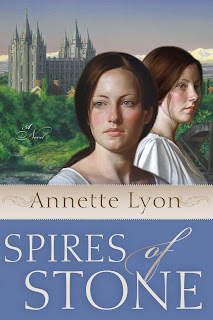 Even better, I now have the cover image, which is always a moment to remember: first seeing how your baby will be "wrapped." This one's a bit different than my last two, being as it has two women on the cover instead of one. I asked for that, since the book really has two heroines, and I didn't want to pick between them as to who would be on the cover.

Do they look like the characters in my head? No. But that's okay; who can see into my head anyway? I've had the fortune to have all of my historical covers with beautiful artwork on them, so I'm not about to complain.

As for a little about the book, here's the backliner (that blurb thing you read on the back of the book!):

Bethany Hansen wasn’t sure when or if she would ever see Benjamin Adams again. She also told herself that it didn’t matter. But when Ben and his two brothers come home after more than two years of serving a mission to the Eastern states, her feelings of heartache and anger also return—fiercer than ever. And so do Ben’s feelings for her.

Good-naturedly, Ben’s brothers attempt to reunite the two, even as they separately vie for Bethany’s younger sister, Hannah. What follows is a charming historical romance complete with wonderful characters and witty dialogue that explores the redemption and power of finding—and rediscovering—true love.

And here are what some other authors have said about it:

In the spirit of Much Ado about Nothing, Spires of Stone is a wonderfully rich story that will linger in your heart and mind long after you’ve finished reading it.”
—Michele Bell, Author of Perfect Timing and A Candle in the Window

With intrigue, love, redemption, and characters you’ll cherish, Spires of Stone will capture your heart.
—H.B. Moore, author of the Out of Jerusalem series

The construction of the Salt Lake Temple provides an illuminating backdrop for this story of romantic love, scandal, sacrifice, forgiveness, and reunion.
—Kerri Robinson, coauthor of A Banner Is Unfurled

A witty and well-crafted historical romance that will leave you wishing it were twice as long.
—Jeffrey S. Savage, The Shandra Covington mystery series

I hope readers enjoy it as well. As Michele Ashman Bell pointed out above (and as I hinted in a previous post), the book is somewhat of a retelling of Much Ado About Nothing. That said, the characters took on lives of their own, so there are parts that veer away from the original, especially in the last half.

When the release date's closer, I'll blog about how I morphed Shakespeare's story and characters to fit 1867 Salt Lake City. Some people have asked me why certain characters have the names they do, and some of that is a misunderstanding of which Shakespearean characters they actually represent. So I'll clarify some of where my head was when I wrote it.

In any event, this is probably my most light-hearted historical, with more humorous scenes than any other. I had a ball writing it, and I hope readers will enjoy it, too!
at July 19, 2007

I can't wait to read it. I love the idea that it has some humor in it.

Cool cover. It's always nice when you like it. :)

Absolutely gorgeous! I'm so dang excited to get this book. congrats

I'm excited for you, Annette-and for all your many readers when we get to read this new book. I'll be watching for it in the stores.

I think it's my favorite temple cover yet!

Congratulations! What an amazing achievement. And the cover is beautiful!

Beautiful cover!!! I can't wait to read it!

It's so exciting! Congratulations.

That is a great cover, and I love how all your covers co-ordinate.

I tagged you for a fun meme today; I hope you'll play when you have time!

(I see from your profile that we have the same LMM favourites - I wrote half my M.A. thesis on Rilla of Ingleside. I'm glad somebody out there knows what I mean when I say Jem Blythe would be just the perfect big brother!)

Wow, thanks for all the well wishes, everyone!

Bubandpie, I have an insane desire to read your thesis!