One Chore I'm Good at

I'm the first to admit that my house isn't as clean and tidy as it could (okay, should) be. I do work at it, although I also think that my kids need to be taught to do their share (one of many reasons I don't do Fly Lady—I may end up with a squeaky-clean house, but the kids won't be the ones cleaning the toilets. That's not okay with me).

Like most human beings, I dislike many areas of housework. But I've been surprised at how many times I've run into bloggers recently who say they abhor the one chore I don't really mind doing: laundry.

Really. I don't mind. It's rare that my laundry becomes a mountain of doom. It's one chore that almost takes care of itself. You load it and walk away. Sure, there's the folding afterward, but that's minor (and it doesn't involve crumbs or germs or dirt).

So it occurred to me that maybe my method of doing laundry is different, especially after I did that meme where I showed a picture of my laundry room and people commented on my sorting baskets. Doesn't everyone have baskets like that? My mom did when I was growing up, so I thought everyone had them.

Or maybe my method isn't anything special; I don't know. But since laundry really isn't a burden to me, and it is for many other people, I thought I'd mention it. If this something useful to know, I'll have Josi throw it up on her sidebar of posts with things that work. You tell me.

Here's how my laundry life will go today:


That's it. I don't worry about folding all the clothes every single day. I know I'll get to the current basket of clean ones in the morning. Or tomorrow. Whenever.

So here's the photo from that meme again: 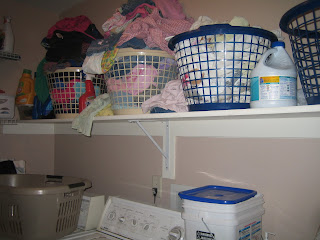 I have no idea what day of the week it was taken, but you can see that I probably did delicates that day, because the basket on the right is empty. And I probably did whites the day before that, because the whites basket is medium-ish. The darks and lights are both pretty full, so they'd be up next. I'd decide which to do the following day based on which one I did most recently if I remembered and/or what clothes I knew are needed next—or I'd pick one randomly.

There's a good chance that in the picture, the delicates are in the washer or dryer right now, because the brown basket (my trusty transporter one) is empty and on top of the dryer. You can tell that a few lights need to be pretreated because they're on the shelf (if there are several items that need treating, they'll be in a pile instead of simply draped over the edge of the basket.)

Here's the part where it's not a burden: if I do one or two loads on most days, then when things get chaotic (you know what that is like, right?) it's no big deal to skip a day or two. No one runs out of underwear or jeans for school.

Granted, there are some weeks I end up needing a few loads several days in a row, like after a family trip or after #2 came home from a week-long summer camp. But for the most part, if I just do a little laundry four or five days a week, it never builds up, and there's never a mountain to tackle.

Now if I can just figure out a way to get the sweeping, vacuuming, and clutter issues under control, I'll be set. Maybe.

Email ThisBlogThis!Share to TwitterShare to FacebookShare to Pinterest
Labels: lifestyle, works for me

Okay you really are the coolest person I know. I like laundry because i can do an audio book or a movie, or chat with my kids while I'm folding and putting away. It's the one thing that allows me "down time" at the same time I am accompliching something. toilets. I hate toilets. Toilets are a chore where you have to embrace the grossest thing in your house to get it clean. ICK

I don't mind laundry all that much either (unless there's a hurricane and I have to do it by hand--ugh, I shudder at the memory). And if I'm the one doing the folding (because sometimes I have the kids do it) it ALWAYS and ONLY happens while watching Oprah. I don't have time to sit and watch ANYTHING during the day, but if that pile of laundry is still sitting on the table at 4:00 p.m., I drag it into my room, close the door (because the peace and quiet is simply heavenly), turn on Oprah and enjoy the hour. It's my method and I'm stickin' to it. :)

My kids have too many clothes, in too many sizes. That's my problem. That and a bad attitude. Working on it!

I learned to sort from my mom too, so we have predivided laundry hampers in our rooms. It makes it so easy for my nine-year-old to do his laundry and it's a chore he actually likes (that and toilets-!!!!) because it makes him feel grown up and it's easy. We're still working on folding and putting away clean clothes, but we're getting there...

I don't mind doing the laundry. I have a system similar to yours, except sorting baskets are in individual bedrooms. I'm fine with washing, drying and even folding. It's the putting it away into drawers that I get stalled out on.

Yep- I hate laundry. It's just the schore that never ends. Vacuuming takes me 10 minutes. And it's done. Laundry goes on and on forever. Bleh. Although I did start making my kids put their clothes away themselves over the summer. Still, that's the easiest part, in my opinion! Lol! See how positive I am?

I like Melanie J. more and more every time I read her posts. She's teaching her nine year old to do his own laundry. That's the way to go. A little investment now will save you tons of laundry time in the future. Well done M.

I don't mind Laundry either, it's something that's relatively easy to fit in around other things. I love the transfer basket, I don't have one of those but I can see how it would be much easier than 'armloads'. I also hang everything with shoulders except PJ's, it makes sure the shirts aren't wrinkled and makes it easier for all of us to choose our clothes. I have shelves in the laundry room where I put each kid's clothes, that way they don't end up on the floor and I don't have to take them to their rooms. I also put all the socks in a basket and once a week sit down and sort via dr. phil :-) Great system, I'll put it on the link list ASAP

Oh, and my kids start doing their own laundry at 11. They get a sorter for one of their birthday gifts and if they run out of underwear, it's their own fault. It takes a few years for them to get the systems down, but my 14 year old is now very much on the ball--she got tired of the no underwear thing and does her's pretty regularly one day a week.

Yeah, I've debated whether to have the kids do their own laundry. My son did his for a month as part of a Duty to God check-off thing, and it worked okay (although I had to be sure it was the same day each week so my system for the rest of the family wasn't thrown off)--but I couldn't get past the fact that his loads weren't full, so to me it felt like waste of water, detergent, and power.

Maybe eventually the convenience will outweight that part.

I don't mind laundry although it takes me longer because I hang the clothes outside. Also, how do you deal with cold water washes? Every week, we have at least one cold water dark load along with the warm water darks. I tend to go by how full the hampers are and what they are most full of. The cleaning part, ugh. There is always so much clutter that has to be cleaned away first! For that reason, bathrooms are okay for me. There's usually very little if any clutter in there so it's a straight-forward cleaning session.

My system is a lot like yours. I have hampers that are divided- each section gets a sorted pile- whites, jeans delicates etc. They are made of canvas and I printed the washing and drying instructions for each section on an iron on and ironed them on. As soon as my kids can reach the dials on the washing machine, they learn to do laundry (sew buttons, iron sunday shirts). And each child has their own basket for clean laundry when it comes out of the dryer. And each section has a day to be washed. And each child had a day to do a load of laundry- wash, dry, and put in the right basket.

That worked for a while, now with me working 2 jobs and going back to school, I just assigned each child a day to make sure their own laundry was washed dried and put away, leaving with just mine to do. We'll see how that goes.

I'm like you -- I like doing the laundry. Except the putting away part. I like sorting, washing, drying, and folding but I hate putting away. Which is why it takes days sometimes. :)