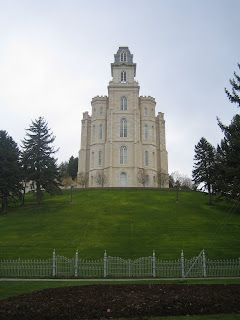 One of the best part about writing novels based on historic temples is learning so many cool tidbits that most people never hear about.

I learn far more than ever makes it into my books (first and foremost because they are novels, not history lessons), so I thought it'd be fun to pass along a few fun things that aren't in my books, starting with Manti.

First off, David, a friend of mine (who has a private blog, or I'd link over) passed along an article about the Manti Temple. It's a great read. Thanks to my research, I already knew most of the information in it.
(Edited Oct 2011 to add: The old link above stopped working, so I've replaced it. Another piece about the Manti Temple is HERE. Also, I've since learned that a commonly stold story about Scandinavian boat builders basically making a boat and flipping it upside down for the roof is almost certainly untrue. There's no evidence of it, and the roof doesn't resemble the hull of a boat at all.)

One part of the above article made me smile: it includes one story that's retold in Tower of Strength.

I won't say which, but if you read the book, you'll recognize it. (Okay, fine. Two words: Parry mules.)

Workers' Wages
One common misconception is that no workers were paid for their labor on the Manti Temple. Early on, Brigham Young did declare that no one would be paid and that the temple would be built entirely with volunteer labor. Because he said that, people assume that was how things actually played out. (The quote is even on a plaque at the base of Temple Hill.)

However, after President Young's death, his successor, John Taylor, changed things. While there was still a lot of volunteer and tithing labor, many workers did get regular pay. He, the quorum of the Twelve, and the temple officers set the rates based on the different jobs, paid in either cash or commodities.

Personal Donations
After they were settled and doing well (and being creatively thrifty--there are lots of fun stories about that), the people sacrificed and donated what they could to the cause of the temple.

Ellice Moffit, who was a young girl at the time, reported that their family had saved up enough money to buy a few gallons of linseed oil and white lead for paint so they could paint the fence around their house. The Church asked to use it as part of the first coat on the temple.

The family simply handed it over. Sister Moffit reported, "We all felt good about that, we felt blessed." (A Folk History of the Manti Temple, by Barbara Lee Hargis)

Fun Characters
A lot of Danes settled the area, and they were great at laughing at themselves. Another story in A Folk History is retold about "Silent Pete," a man who was very unlike the talkative Danes; he usually gave one-word answers.

The story goes that Noble Andrew, a Dane, asked (I'm not repeating the accent recorded in the original, and I'm not sure what was meant by "bot" flies): "I understand, Peter, that your horse got bot [sic] flies. What did you give him to get rid of them?"

A week later, they met again. Noble said, "By the way, Peter, what did you say you gave your horse to get rid of the bot flies?"

"That is what I thought you said. It killed mine."

Silent Pete answered, "Killed mine, too."


Today the tour is very busy:

And I was interviewed at:
Modern Molly Mormon

Email ThisBlogThis!Share to TwitterShare to FacebookShare to Pinterest
Labels: temples, Tower of Strength

That's so interesting! I've not been to the Manti temple since I've been endowed. I would really love to go.

All of my ancestors are Danes and almost all of them were settled near-ish manti. And they all laughed at themselves.

I've heard of bot flies. Look how Danish I am!

I'm partially Danish but have never heard of bot flies but that story is awesome.

Off to google when the Manti pageant is.

My SIL has always loved the Manti Temple. We're from Kansas, but that's where she wanted to be married. It was there, on her wedding day, that my husband knew he was going to marry me, his sister's best friend.

The Manti temple is gorgeous, inside and out. When I was there for my best friend's wedding, a man told us that the Manti temple had the highest elevation of any on earth, and so the sealing rooms on the top story were closer to heaven than any other sealing rooms anywhere else. This may not be true with the recent addition of so many more temples, but still a cool bit of trivia.

p.s. I finally got my library fines cleared up and checked out and read two of your books over the weekend! At the Journey's End and At the Water's Edge. Loved them. I'm anxious to read more! And it was really fun to read the books, knowing you. Especially Water's Edge. I could just picture you in Finland, eating chocoalte at Elephant's Rock. ;)

Those are all very interesting tidbits! I love stuff like that.

And I really hope I win at MMB!

That was just fascinating, Annette!

Annette, I just finished reading Tower of Strength and want to thank you for a breath of fresh air. I've been stuck reading such awful, bloody, gruesome. or unresearched books lately I really needed one that is well-written, well-researched, and which left me feeling up rather than depressed or annoyed. I'll have more to say about it on Meridian.

And Rod and I got married in the Manti Temple.

These are awesome. I'm gonna have to forward this to my in-laws. They've been in Manti since ... Brigham Young told them to go settle it.

That bit about the Washington Memorial was AWESOME! And the all-seeing eye has me itchy to look into it further...

You'd be so much fun to chat with and pick your brain.

I love how you are using blogs to promote your book--what a great idea!

How interesting! I love to learn tidbits like those.

Oh, and botflies are flies whose larvae grow in a host. You know those weird stories about people having some weeping, nasty swelling on their body somewhere and it turned out to be a worm-like larvae?

Sorry to have to be the bearer of disgusting news, but those are botflies. Eeew.

Jennie, Thanks so much! I look forward to the review.

Rebecca, I'm sorta glad I didn't research that before . . . ugh!

email me with details for the giveaway item ... thanks!

Will you be a dear sweetie and help me win a trip back East? go to www.becausemomsaidso.blogspot.com and vote for Susette at All Good Things Come...

I love learning tidbits like this ... and what a busy book tour day!

It was thrilling to be there this weekend and see the new park going in across the street where the church just bought property from the city. I'm anxious to see what it will be.

Just a note - I served my mission in Provo, and served in Ephraim for 7 months. We had the privilege of cleaning the temple twice, and the last time the head custodian took us on a tour of the temple, and relayed the boat story to us, and as proof, took us upstairs and opened a door (just below one of the towers, if memory serves) that opened up into the framework of the temple, and it totally looked like an upside down boat. Massive wood pillars that came to a peak below the roof. If the boat story isn't true, it sure looks like it is.

From what I've read, the roof's appearance from a layman's view does look like a boat, which is probably how the story got started, but that from a ship-maker's perspective, that's not how they built them at the time.

It's one thing we'll probably never know for certain in this life. :)