Okay, so how cool is this:

When my son was just a tiny baby in one of those baby swings, I began writing alone for the first time instead of with Sam, my collaborator on two previous projects. As I've mentioned before, it was darned scary.

The book was a Young Adult fantasy which I entitled The Golden Cup of Kardak. It's a fun story, if I say so myself.

Here's the relevant part: near the end of the book, the goblet turns into a sword.

A couple of years ago, my son, who was no longer that little baby but a big kid, decided to read it. He marked it up with his own editorial red pen and seemed to really enjoyed it. At the end of one chapter, he scrawled, "Cool!" and on another, "Fantastic!" High praise from a then-11-year-old.

Fast forward to 2009. He's really into computer animation and wants to do it as a career when he grows up. He's been doing tutorials with Blender software and making a bunch of cool things with it.

Recently he said, "Hey, Mom, remember the Golden Cup of Kardak? Check this out." 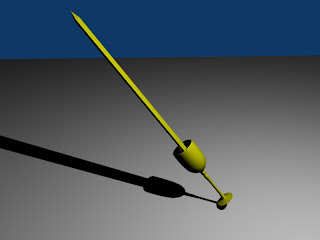 Unfortunately, the file of the actual animation is way too big to load onto Blogger, but here's a still-shot of the goblet-turned sword.

Isn't that fun? (And even cooler that he remembered the story two years later and wanted to animate something from it!)

Rob Wells on Six LDS Writers and a Frog, wherein the girls on my book covers are part of a graphic novel.
at March 24, 2009

I see a great career in his future!

That is really, really neat. I have a 13 year old son also and he is very techy.
It is amazing to me what boys (and girls) this age can do on the computer - the level of knowledge they have access to.
For your son, this is like his own private story he can work on and that is crazy cool!
Love the cup turned sword! His vision is promising.

All parents get to teach and mould their children to a certain degree, but you got to inspire him. That's wonderful!

Great job. That is really cool.

Very cool! And perhaps he can collaborate with you someday and you'll see some of your stories animated instead of in books. :)

I think it says a lot that your child enjoyed and remembered the story. What a treasure!

What a compliment to you Annette!!! And I'm amazed at what kids can do now a days!

That is very neat, Annette. I love it. Is this the same kid that went to church when the rest of you weren't there?

What a smart kiddo! And a great idea too. Do you think you'll pursue that book?

That is very cool! Both the animation and that he remembered your story.

Hey if you have a web site, put it up there and supply a link instead… unless you don't, but that's OK. I'll bet it looks cool.

Maybe one day he'll do the animated version of your book and you can both make millions! :-) Isn't it so fulfilling when they are old enough to appreciate what you do? For me it was a huge relief and has helped me deal with the inevitable guilt of this career of ours.

No kidding, Josi. For years my kids thought that Mom types a lot. It wasn't until we could walk into a bookstore and see my name of the shelf that they figured out what I was doing.

Way cool! Animation could lead to a great future for him.

Creativity must run very deep in your family.

Wow! He's only 13?!! What a talented kid!
P.s. I was noticing your book signing tour on your side bar? I was wonderng if and when you are coming to my neck of the woods?

That is so awesome! He has such talent. Must be exciting to see that as a parent and must be very gratifying that he loves your work.

I love the sword coming out of a goblet!

That is both very cool and very sweet!

THAT. Right there. Is probably the highest praise an eleven year old EVER gave his mother.

Be proud. Be VERY proud.

That is SO awesome. Definitely high praise from your son. I think it would be very cool if some day he were able to animate the whole story, watch out Walt Disney!

love your hanks for stopping by mine today...

I am sure there is no praise higher than that. The fact the book was cool enough to animate is way cool!

That is so great. (I've seen your comments on other's blogs ; )

I am sure you are still floating on cloud 9!