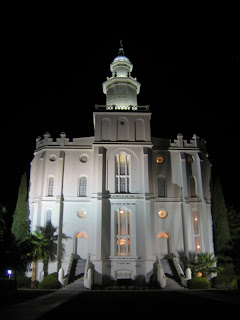 The settlement of St. George was so significant to building the temple there, that that's what I'm focusing on today, rather than on specific temple stories. (I can go into those another time.)

After I learned about the settlement of southern Utah, I'm amazed anyone stuck around. Many didn't.

The original reason for getting a settlement down there was so the Latter-day Saints could be more self-sufficient. The Civil War had broken out, which led to a decrease in the cotton supply out West.

Combine that with the fact that Brigham Young didn't like to rely on outsiders for anything, and he decided that the Saints needed a way to get their own cotton.

(I found it ironic that even when the Cotton Mission was up and running, they always, always relied on dyes from back East to color the fabric.)

They'd already had success growing flax in what is now Utah Country, but they needed a warmer climate for cotton.

After scouts came back to Salt Lake and described the area, a lot of people were understandably wary. Volunteers were requested to settle the "Cotton Mission," but only one man raised his hand. The next week, Church leaders just called people from the pulpit, folks who had the skills they needed (everything from farmers to blacksmiths to coopers and even a mineralogist and a fiddler).

I'd heard about those kinds of mission calls and always marveled that the men just accepted their calls and did their duty. Not this time. About a third declined. They knew what a harsh environment they were being asked to live in. No, thanks!

Of those who did go, some turned around and went back as soon as they saw the area, and still more left after giving it a go for a time. The heat and other issues just made eking out a living there hard.

One early trial was an outbreak of malaria. (In the desert. I know; I don't get it either.)

A continuing problem was the Virgin River. The settlers had to dam it to reroute the water so they could actually water their crops. They spent much of the winter of 1861-62 making a dam and ditches. In the spring, floods washed out the dam and filled the ditches with mud. This delayed building their homes.

The dam washing out (and then rebuilding it) became a common theme: it broke again and again over the years, making it hard to grow food and build shelter, let alone to grow the cotton they were there to produce.

The settlers eventually began construction on a tabernacle, and then, on the counsel of Brigham Young, construction on a temple. I go into some of the challenges in building the temple in At the Journey's End, so I won't here. Just know that the people had their work cut out for them. I would have sat down and cried.

By the time the Cotton Mission was disbanded, there was quite a large settlement, and living there wasn't quite as big a sacrifice.

One interesting item is that a handful of people who were originally called to the Cotton Mission made a point of growing a token amount of cotton in their gardens every year even after the mission was closed.

Their reasoning: They'd been called to grow cotton and hadn't ever been released from that duty.

The early settlers had little in the way of material goods, and they sacrificed greatly to build both a tabernacle and a temple.

At first glance, building a temple there doesn't make much sense. The bulk of Church membership certainly wasn't in the area. The Salt Lake Temple was under construction (although it wouldn't be done for some time). Before long, the Logan and Manti Temples were being built and would serve more members of the Church.

In the end, President John Taylor, who became prophet shortly after the dedication of the St. George Temple, explained why it was built there: "Because there was a people living here [in St. George] who were more worthy than any others. Who were more worthy of the blessings of the temple"

Essentially, only the best of the best not only agreed to go down there, but they stayed and endured and sacrificed greatly because of their faith and dedication to God. That devotion was repaid with the blessings of eternity.

I'd say it was worth the price.

Today's tour stops:
An Ordinary Mom (in which I'm long-winded with thoughtful questions I've never been asked before)
If You Give a Mom a Moment (where she quotes lines from the book and tells why they resonated)
at March 30, 2009

I've always thought that St. George seemed like a strange place to build a temple, but we can obviously see now why it was needed!

This is so interesting. Unlike Kristina, I'd never even thought about how strange a place St. George is for a temple. That is such an interesting story.

Malaria in Utah? I had no idea!

I never knew about the cotton - that is really interesting.

I also never thought about the Temple in St. George being kind of an odd place but now that I think about it...
I am sure glad it is there. I visited it once and it is wonderful.

I am about 1/2 way through Tower of Strength. I love the love story starting to build and the fact that MIL's were not fun even back then! Tabitha is a great character - she is so strong!

How cool! These trivia things are fascinating.
I guess this is a great example of how the Lord works in mysterious ways to bring about his purposes. St. George is now one of the highlight cities of Utah, and the church is very strong there.

I'm sorry I haven't been by your way in a while to read your blog. Life has been crazy busy for me. Working 20 hours of overtime for the last 3 weeks. Ewww. BUt I wanted to stop by and tell you I've been reading your new book and have loved it! I'm half way through. It's been a joy and uplift. I'm glad I met you and was told you write books so I could read what you do. You're talented!

Both your tour stops today are regular reads of mine so I feel like I got a triple dose of you today. Wheee!

Fascinating post. I know so little about this era of church history.

Very cool! I love the St. George temple. I think it is one of the most beautiful.

And now, St. George is so full of people and busy it's crazy! And, of course, it's 20 degrees warmer than anywhere else in Utah, which in winter is a good thing, but in summer, just stay away!

Very interesting. And now I know why there are cotton plants growing on the temple grounds. I'd wondered about that.

Cedar City has a similar history with the iron mission. It's all very interesting.

I love that you pour your brain onto the blog for us to marvel over. This is fascinating stuff and you write it with such reverence and respect. Thank you.

I think I may have been one to turn around as soon as I saw what it was like. . . sadly, not the best of the best.

Wow. I didn't know one single bit of this. How fascinating.

I've really enjoyed your posts on the "trivia" (it's not exactly trivial) about the Salt Lake temple before and now about the St. George settlement. I still don't understand why people live there. What would they do if the power ever went out? Shudder. I would definitely have wanted to have been called to settle Hawaii. What? They didn't call anyone to settle Hawaii? I don't think they did. You might know.

Well, I certainly am learning alot abou the temples. That is so cool . It is just info I NEVER would have known.

Fascinating Annette. I'll have to read your books to glean more information. My great grandfather worked on both the Salt Lake and St. George Temples before coming back to Logan/Cache Valley to finally settle. In one book I read it reported that he left St. George because he was unable to make enough money as a carpenter in both locations. If there is any story I would be interested in hearing more about it would be that line of my family history.

Just letting you know that I posted my review of Tower of Strength. You can find it at http://viewsfromhobbithole.blogspot.com/2009/03/virtual-blog-tour-tower-of-strength-by.html