Kristina P posted a Glamor Shots photo of herself and invited her readers to post really awesome (read: laughable) pictures of ourselves from the same era.
I never did Glamor Shots (darn it!), but I did do a buddy picture with all three of us wearing the classic (cliche?) denim shirt and sporting the big, permed hair (with matching bows the size of rodents, no less).
Here I am around 1992. (Pardon the blur. It's a photo of a color photocopy. Lame, I know.) 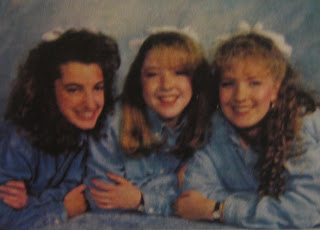 Sheryl, in the middle, is the friend people have assumed is my sister, my twin, or even ME literally since kindergarten. More than three decades later, we still get it. (I don't see it, but whatever.)
Thora, on the left, is the one everyone in our large group of friends knew people (read: GUYS) meant when they asked who the "hot" one was. There was never any question; guys always meant her. (Great for the 'ol self-image, I tell ya.)
S & T, don't kill me for posting this, k?!
at April 16, 2010

Email ThisBlogThis!Share to TwitterShare to FacebookShare to Pinterest
Labels: Just for Fun, laughing at myself

Love it! That so could have been any of my friends in Jr. High!

That's pretty good, Annette. Love the perm. You all look very happy! (You probably could have left off the "small" in front of the "rodents". :)

YES! I can't tell you how many pictures I have with the same hair style (perm and huge barrettes)!!

Umm you guys like twins or somefin?! lol get it too, you do look a lot alike! :)

Bows are back in babe! YOu rock it!

At first glance I was sure Cheryl was you. So funny. I think my best friend and I look awfully alike, too. People definitely thought we were sisters, anyway!

And so fun to see Thora! That made me smile today. :) The first time I met her we competed against each other in region drama with the EXACT same monologue. I didn't like her much then, but I sure love her now! :)

You guys are totally stylin'! I love the bows.

Hee! I have a picture so close to yours Annette! My three best buddies in high school and I are wearing the ever popular sailor dress with big blue bows and the wall hair to boot! How funny. =)

And I still wear denim shirts. I regret nothing.

Oh the denim shirt! Fun. You could always be sure of looking good if you wore one of those. The bow sealed the deal.

I never had friends to take pictures with. ;) I do see a similarity between you and your sister but I can still see a difference too. Don't feel bad about "the hot one" comments, Annette because you're still smokin'!

I feel all left out with the denim. All I had was star spangled pleather.

I love the friend pictures a bunch. I remember having those huge bows too. I bet at least half of my school pictures I have a bow that big in my hair!

Ahhhh, those were the days! That picture took me way back! I loved you 3 back then and I love you even more now!

You two look a lot alike to me. Cute pic!

I never did glamour shots or bff shots or big hair shots or anything like that. But... my high school senior pictures: denim shirt. Those were the days!

Now that I'm going through everyone's pictures, I'm realizing that maybe I really do have some pictures I could post.
I'm just too lazy to walk all the way to my basement to dig them out.

Awesome! Love that you played along! And is it wrong that I really want to snag one of your perfect ringlets and let it go just to see if it makes a "boing" sound?

Wow! So much hair you all almost don't fit in the pic. Love it.

It's late in Missouri, can you tell?

Love this, I can so relate to the big hair bows, bigger hair, denim that was all the rage. What a trio!!